After almost a year with no school to call their own, Burlington High School students have a home base. On Tuesday, school leaders and local politicians gathered to celebrate the opening of a downtown school campus, in the Cherry Street building that once housed a Macy’s department store.

Students will return to in-person learning there on Thursday, with half attending classes on Mondays and Thursdays, half on Tuesdays and Fridays. Wednesday will be a remote-learning day.

“It’s amazing to think that we are standing in what used to be a department store; that we’re greeting people where we used to buy winter coats; reading books where they once sold fine China; taking phone calls in converted changing rooms; and learning science in the old suit racks,” Superintendent Tom Flanagan said at the ceremony.

It’s been a tumultuous year for the students and teachers. Last March, classes went remote and the campus off North Avenue was shuttered due to the coronavirus. Then in September, just a few days before in-person classes were to resume, the school closed indefinitely after elevated levels of cancer-causing polychlorinated bipehnyls (PCBs) were detected in several buildings.
Students have been learning remotely this school year, save for a half day each week at Edmunds Middle School for the past three months. And in early January, principal Noel Green abruptly resigned, citing lack of support from the school board.

Shortly before Green’s resignation, the school district signed a three-and-a-half-year lease to occupy 67 Cherry Street for $1.2 million annually — a temporary solution as the district figures out how to remediate the high school’s PCB problem. The building is owned by Don Sinex, Dave Farrington, Al Senecal and Scott Ireland, the developers of the adjacent CityPlace Burlington site.

In mid-December, the school district embarked on a $3.5 million, 10-week renovation project, helmed by Farrington Construction, to transform the 150,000-square-foot space into a high school, with a cafeteria, library, music, art and physical education rooms, and dozens of classrooms. Though signs of Macy’s remain — Michael Kors and Betsey Johnson logos on the walls, empty display cases, swaths of cherry red carpet, escalators running up and down its center — the space now looks and feels like a school. 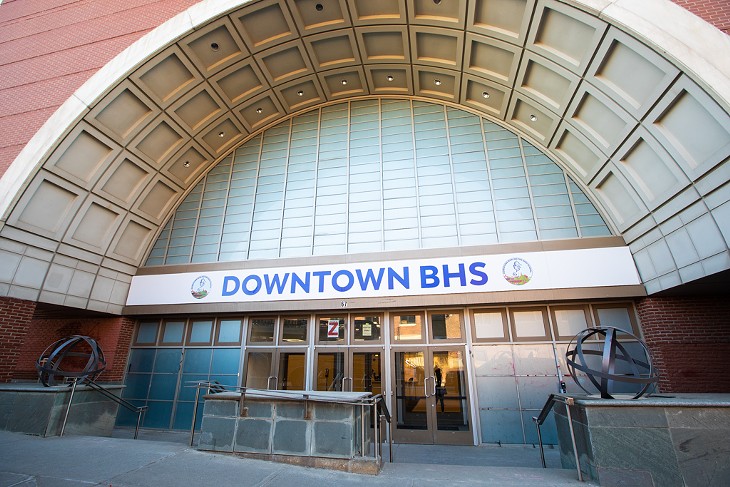 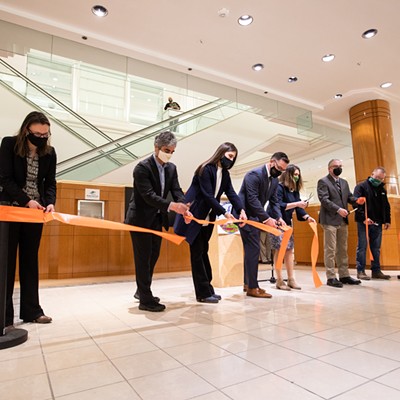 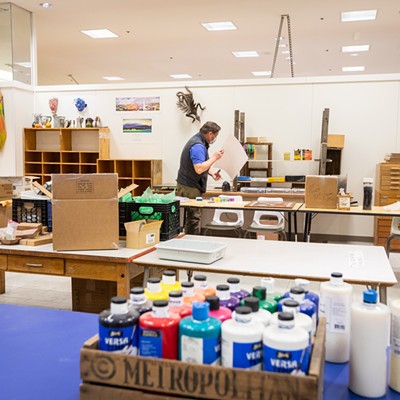 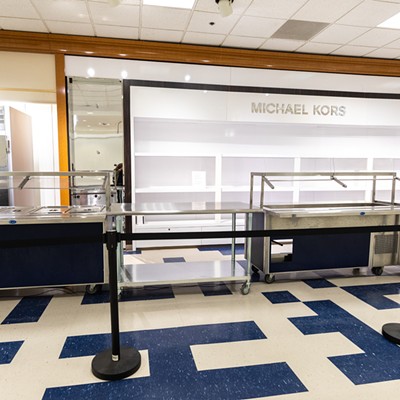 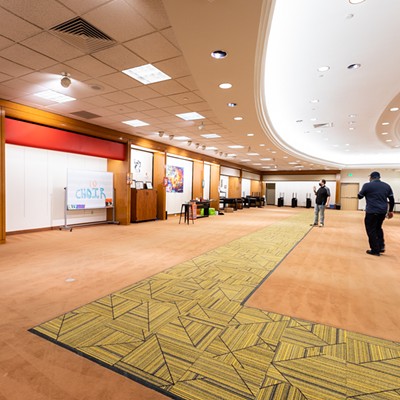 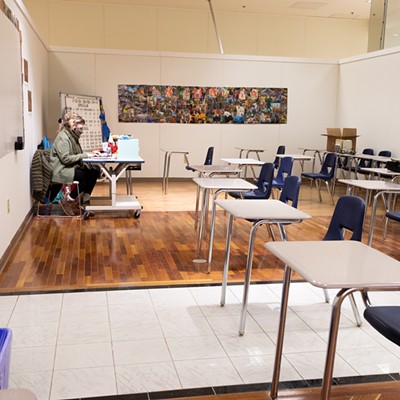 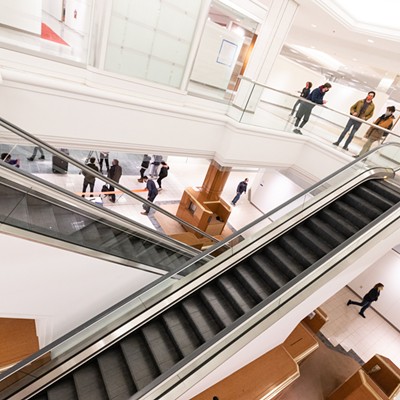 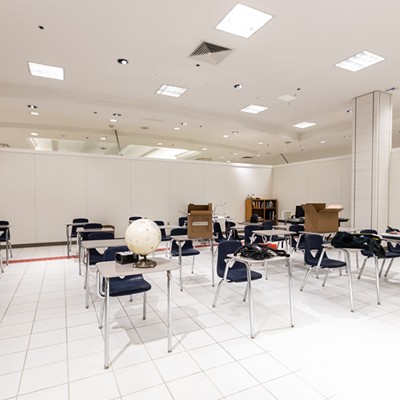 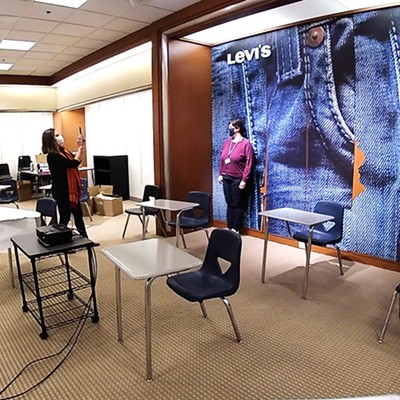 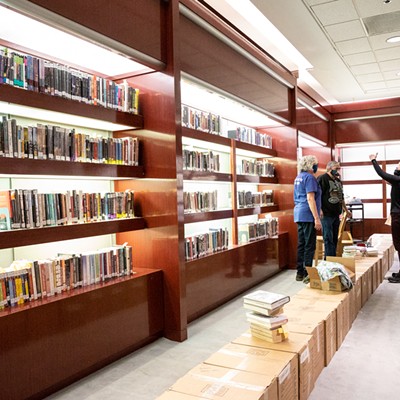 Inside the Downtown Burlington High School
By Cat Cutillo
Click to View 23 slides
Flanagan thanked two state legislators in attendance Tuesday, Sen. Phil Baruth (D/P-Chittenden) and House Speaker Jill Krowinski (D-Burlington), for helping to secure funding for the project. The state is footing the bill for the $3.5 million renovation cost.

Mayor Miro Weinberger offered his congratulations to school district leaders for acting “decisively and quickly” to open the new building.

“A city isn’t really a city without a high school,” he said. “There’s been this real void for months.”

Burlington High School Students Feel the Impact of Remote Learning
By Alison Novak
Education
A small group of Burlington High School students, members of the National Honor Society, were also there, filming informational videos to help acquaint fellow students with the labyrinthine space. Senior Ariel Felcan was among them.

“It’s really cool to see,” she said. “I’m excited to spend the rest of the school year here.” Felcan said she’s most looking forward to the casual social interaction that in-person learning will bring, from seeing other students in the hallways to sitting next to them in the classroom.

The ribbon-cutting came on the same day the state announced it would begin vaccinating teachers against COVID-19 next Monday, March 8.

As Vaccination Pace Quickens, State Shifts Teachers, High-Risk People to Front of Queue
By Anne Wallace Allen
Off Message
English teacher Jill Kelley and social studies and history teacher Brennan Carney were among the educators getting their classrooms set up for students’ return.

“I was giddy this morning driving into work,” Kelley said. “It will be nice to have a space to welcome students, to see their faces when we’re learning … I’m very excited and hopeful.”

Carney said he thinks students will be “pleasantly surprised” by the newness and cleanliness of the building.

“There’s no institutional knowledge of this space, so everyone — teachers, admin, every student [grades] nine through 12 — is going to feel lost for a while, which actually gives you kind of a fresh vibe,” Carney said.

Interim principal Lauren McBride said that it will take teachers several weeks to settle into their classrooms and reestablish routines, but many are already thinking about how to get out into the community when the weather gets warmer, whether it be attending pop-up concerts on Church Street or taking students down to the lake.

“I think that there’s that excited energy, across the board, of returning to … in-person instruction and making those connections outside of the screen,” McBride said. “As much as our students are craving it, our faculty and staff are craving it just as much.”

Correction, March 3, 2021: A previous version of this story misreported Krowinski's position in House leadership.
Prev
Next