Burlington Voters Back Ballot Measures on Weed, Evictions By Big Margins | Off Message 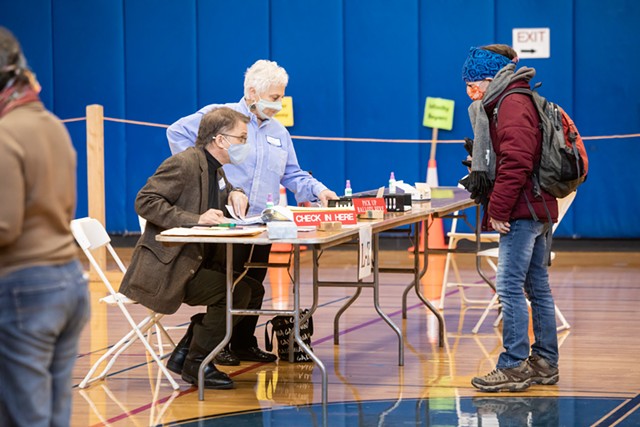 
City residents also opted into a retail cannabis market by an overwhelming margin, paving the way for legal weed sales to begin there in fall of 2022.


Progressive-led campaigns to ban no-cause evictions and restore ranked-choice voting for city council races each passed by wide margins. The contested measures performed slightly better than a Weinberger-endorsed charter change to claim municipal authority to impose fees on heating systems that run on fossil fuels. That measure passed with 61 percent of votes.

Charging Forward: Burlington’s Building Electrification Effort Hits the Ballot
By Kevin McCallum
City
The charter changes must be approved by state legislators and the governor before taking effect.

“I feel like we’re part of something really special right now that’s happening in Burlington, and something really historic,” City Councilor Jack Hanson (P-East District) said during a virtual event once results were in.

In endorsing ranked-choice voting, voters reversed a 2010 decision to repeal the system that had helped Progressives take the mayor’s office in 2006. The change on Tuesday’s ballot only applies to city council races and would allow voters to rank candidates in order of preference. It passed with 64 percent of the vote.

Can Once-Maligned Ranked-Choice Voting Make a Comeback in Burlington?
By Courtney Lamdin
Politics
The eviction measure won 63 percent of voters despite organized, at times cynical, opposition from landlord interests. Weinberger did not take a public position on the question.

The margin of victory left its proponents feeling energized about their organizing power and more confident that state lawmakers would sign off on the change.

“This will show us tenants across Burlington what we can do when we band together,” said Christie Delphia of the Burlington Tenants Union. “This should be taken as a message to Miro Weinberger that he needs to get up and do something about the housing in Burlington, because what we’re living in is unacceptable.”

A Just Cause? Landlords, Tenants Battle Over Burlington Eviction Proposal
By Courtney Lamdin
Off Message
Tom Proctor, campaign director for the Just Cause Coalition and partner of Progressive Councilor Zoraya Hightower (P-Ward 1), said the election showed that residents, nearly two-thirds of whom are renters, “massively favor” more tenant protections. He added that aggressive campaign tactics used by landlords, including printing signs suggesting just-cause evictions would hurt people of color, may have backfired.

“I think their dirty campaign tactics and scaremongering really turned off the people of Burlington,” he said.

The energy regulation change sets the stage for future policy debates on how to use the newfound authority, should state officials grant it.