Vermont Lake Monsters to Be Sold, Play in Collegiate League | Off Message 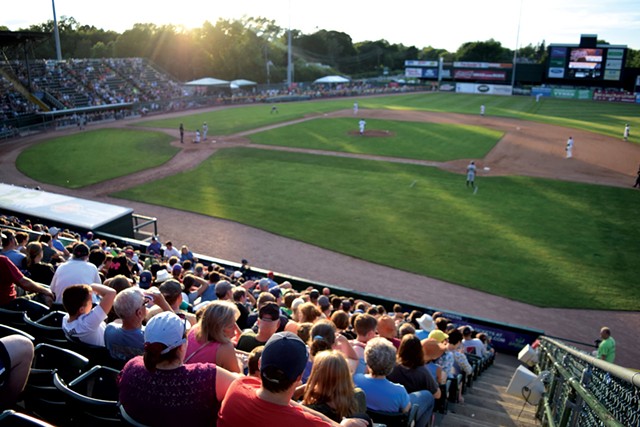 The Vermont Lake Monsters will be sold to an investment group, and the team is expected to play in the Futures Collegiate Baseball League this summer, the club announced on Thursday.

The deal with Nos Amours Baseball Club is contingent “on a few agreements,” including a new lease with the University of Vermont, which owns the team’s historic ballpark, Centennial Field.

“The landscape has changed and this transition will allow the Lake Monsters to create amazing summertime memories for years to come,” Kyle Bostwick, the Lake Monsters’ vice president, said in a statement. “We are all looking forward to continuing to root for the home team, and we thank all of our fans, partners, staff, and supporters for an amazing ride.”

The investment group is headed by Chris English, a hedge fund manager who owns the Brockton Rox, one of seven teams currently in the Futures League. Based in Massachusetts, the league also has teams in New Hampshire and Connecticut.

It pulls players who are “enrolled in a NCAA- or NAIA-sanctioned college or university,” are in “good academic standing, and have at least one year of collegiate eligibility remaining,” according to the league website. Top incoming first-year student-athletes can also participate.

In an interview on Thursday, English told Seven Days that he and his family split their time between Boston and South Woodstock, Vt. Other members of his family live in Shelburne.

He said he's eager to take the helm, though he'll leave baseball operations to his new general manager, C.J. Knudsen, who held the post in Burlington before leaving for another baseball job in 2009.

The team name will stay, as will Champ. And 25-cent Hot Dog Night?

"We're thinking of cutting it to 20-cents," English quipped.

English said he plans to invest in upgrades to Centennial Field and add some amenities, though he wouldn't elaborate. A press conference about the sale will be held in the next few weeks, he said.

English noted that the Futures League held a 68-game season across 16 weeks for six teams last summer and made it through without a case of COVID-19. He says the league will have eight teams this year, including the Lake Monsters, and said they will again try to play a 68-game season.

"We just can't wait to take the field. It's going to be a beautiful summer day soon enough," English said. "The news on vaccines and COVID seem to be trending in the right direction. Obviously when we open, it will be in full compliance with whatever state, city and university rules are in place."

"We are very COVID aware," he added, "and we're going to make sure when the ballpark opens, it's going to be safe and fun and affordable."

Vermont Lake Monsters 2020 Season Canceled
By Dan Bolles
Live Culture
English’s investment group’s name is a reference to a nickname for the Montréal Expos; Nos Amours means “our loved ones” in French and was famously used by a columnist in his story after the team's first game in 1969, according to Baseball Reference, an online directory of the sport's history and stats. Plagued by low attendance, the Expos last played in 2004 before decamping for Washington, D.C., and becoming the Nationals.

English said he grew up in Montréal. The Expos arrived when he was 9 years old.

"We tore up our perfectly good front yard and turned it into a baseball field, like all young Montréalers, and pretended we were the Expos," English said. "The Expos have alway been near and dear, and I obviously went to a few Vermont Expos games a long time ago."

Ray Pecor, owner of the transportation company that runs the Lake Champlain ferries, has owned the Lake Monsters since 1994, when they were known as the Vermont Expos. The team was most recently an affiliate of the Oakland Athletics and used professional players in the big league club's system. The Lake Monsters played in the New York-Penn League, which is a Class A Short Season league.

But the league was eliminated amid a drastic realignment of Major League Baseball's minor league system. Ultimately, the Lake Monsters were one of 40 teams that lost their affiliation.

“When the landscape had changed,” Bostwick said in an interview on Thursday, that presented “a very organic opportunity for a segue.

“And it was one that we thought was best for the long-term future of the ballclub,” he said of the sale.

The deal could be finalized as soon as next week, according to Bostwick. After 28 years with the club, Bostwick won’t stay on with the new ownership.