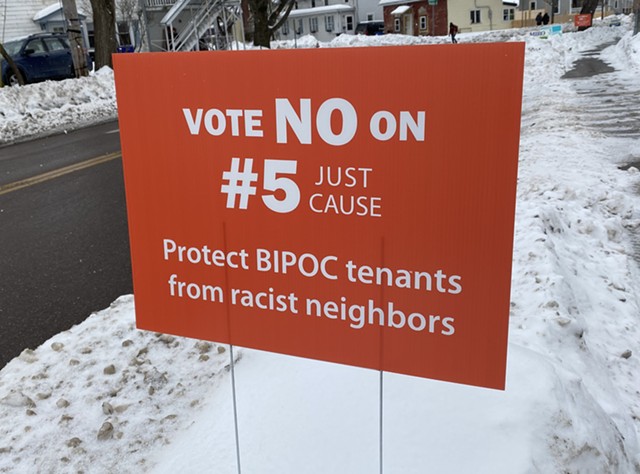 Renter-rights advocates are condemning signs that urge Burlington voters to protect tenants of color by rejecting a ballot item that would ban no-cause evictions. The proposal, the advocates say, would help, not harm, those tenants.

"Vote No on #5 Just Cause," the signs say. "Protect BIPOC tenants from racist neighbors."

The unsigned messages, which appeared along heavily trafficked public rights of way, seem to suggest that if Question 5 passes this Town Meeting Day, landlords would not be able to evict tenants who harass neighbors who are Black, Indigenous and other people of color.

The orange and white placards drew ire from proponents of the ballot item, including City Councilor Zoraya Hightower (P-Ward 1), who last year became the first woman of color to be elected to the council.

"This is about power wanting to maintain power," Hightower said in a video that she posted to Twitter last week. "The fact that they're using racial justice language to justify hurting BIPOC people is disgusting."

I'm not the only angry black woman in town right now. These tactics are gross and inappropriate. I have been continually shocked at how quickly powerful people with interests have been to spread misinformation against Just Cause. pic.twitter.com/iSfOIyQKqZ

Sunday evening, Burlington landlord Betsy Allen-Pennebaker owned up to crafting the signs' messaging. She said she's part of a group of "mostly landlords" who came up with the slogan. Other signs with similar color and design include more benign messages, such as "Just cause = higher rent."

Allen-Pennebaker, a 20-year Burlington resident and Champlain College professor, has been a vocal opponent of just cause-evictions. Some years ago, she was only able to get rid of a tenant who had sexually harassed her by threatening him with a no-cause eviction, she said. She put one of her apartment houses on the market after learning about the Queen City ballot initiative, fearing that if it passed, she'd have no recourse in a similar situation, she said.

A Just Cause? Landlords, Tenants Battle Over Burlington Eviction Proposal
By Courtney Lamdin
Off Message
While Allen-Pennebaker said she believes that no-cause evictions can protect vulnerable tenants — and has heard of landlords using them to evict homophobic renters — she realized after seeing social media posts that her signs' messaging "was a colossal failure of thought."

"It made it seem like [no-cause eviction] is the best protection for people of color, and I don't think that is accurate," she said, calling the signs one of her worst decisions.

A 2020 study by the Princeton Eviction Lab found that Black renters faced eviction twice as often as white renters and that women face a higher risk of eviction than men. In an apology letter obtained by Seven Days, Allen-Pennebaker wrote that the signs "misrepresented and trivialized — unforgivably — the suffering of people of color."

Political campaigns frequently co-opt an opponents' rhetoric, but "the use by a white person of the social and intellectual capital of a person of color takes on a very different meaning," Allen-Pennebaker wrote. "It becomes yet another act of appropriation and a morally reprehensible thing to do."

"It was a toxic, dreadful mistake that I will always regret," she continued.

Allen-Pennebaker sent the letter to Hightower and to the Just Cause Coalition, an arm of political advocacy group Rights and Democracy that is leading the just-cause effort.


Tom Proctor, the Just Cause Coalition’s campaign director and Hightower’s partner, commended Allen-Pennebaker for taking responsibility for the signs and urged her counterparts to do the same.

“Now is the time to make amends,” Proctor said at a Monday morning press conference. “Make your apology public, remove any signs left out around Burlington and encourage others within your group to step forward as you did.”

The press conference featured a number of speakers who denounced the signs, including state Sen. Kesha Ram (D-Chittenden); Mohamed Sharif of the activist group the Black Perspective; and C.D. Mattison, vice-chair of the Burlington Democratic Committee.

The signs’ claim “ignores the history of how evictions and the threat of evictions have been used as a tool disproportionately against BIPOC tenants,” Mattison said, reading a statement the party posted to Twitter on Sunday. “This attempt, and any other attempt, to confuse and conflate issues has no place in our community."

The Vermont Affordable Housing Coalition, another just-cause proponent, issued a statement Friday saying the signs "are not supported by evidence or research."

"While we know that a Just Cause ordinance is not a silver bullet in solving the nation’s eviction crisis, nor in remedying the United States’ history of discriminatory housing politics, prohibiting evictions that occur with no cause is a critical step in the right direction that would ultimately increase protections for historically marginalized communities," the statement says.

By Saturday morning, the signs had mostly disappeared.

Allen-Pennebaker said she doesn't know how much the signs cost, how many were printed or how many people are involved in the campaign. She said she hopes the others come forward.


Advocates have also criticized the Vermont Association of Realtors for its campaign tactics. The organization’s PAC, Vermonters for Housing Affordability, is sending out flyers to fight the ballot item, including one that says just-cause eviction is unconstitutional.

Erhard Manke, coordinator of the housing coalition, said that claim is “totally beyond the pale” and noted that both New Hampshire and New Jersey have just-cause eviction laws on the books. Another mailer from the PAC says that a just-cause eviction ordinance would shrink an already-tight housing market and that renters won’t know how much their rent will go up “unless they go to court.”

“This is the kind of smear campaign that you see in a big city,” Manke said. He compared the PAC’s tactics to those used by Burlington landlords in 1988, when a just-cause proposal failed at the polls. “I certainly hope it doesn’t resonate with people,” he said.

Manke has also called on the PAC to change its name, saying that his organization’s website is the first result when someone searches for the PAC online. As a result, numerous people have told him that they assumed the Vermont Affordable Housing Coalition is actually opposed to just-cause evictions, Manke said.

The Just Cause Coalition on Monday called on the Realtor group to repair “damage made to the brand and the standing of the [Vermont Affordable Housing Coalition].”

Peter Tucker, the Realtor group’s director of public policy, acknowledged the names are similar but said the PAC has no plans of changing its moniker.

He also defended the mailers, saying they were modeled after campaigns by the National Association of Realtors. He said the proposal is unconstitutional because it “so severely limits a property owner’s ability to rent their property.”

As for the line about rent increases, Tucker said the mailer is referring to part of the proposal that says the city would “limit unreasonable rent increases to prevent de facto evictions.” He said he believes this would result in legal disputes over rental rates.

“It is a very vague phrase that is going to need to be interpreted every step of the way,” Tucker said. “What’s reasonable to you may be unreasonable to me.”

If the ballot item passes on March 2, it will need approval from both the legislature and governor before becoming local law. City councilors would then write an ordinance to define “just cause, “unreasonable” and other terms.
Prev
Next