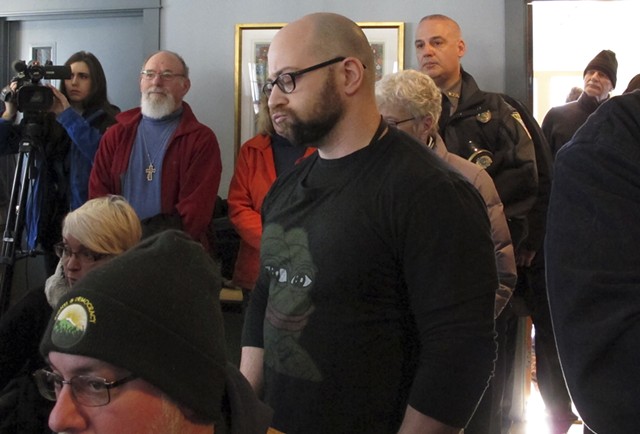 The 51-page ruling issued Friday concludes that the 2018 law, intended to prevent mass shootings, is a reasonable regulation that "leaves ample means for Vermonters to exercise their right to bear arms in self-defense." To reach that conclusion, the high court produced its most expansive interpretation yet of the gun rights established by the state Constitution.

The decision settled the first challenge to the trio of landmark gun control bills that lawmakers approved and Republican Gov. Phil Scott signed in the wake of  the February 2018 school shooting in Parkland, Fla., and a local scare at Fair Haven Union High School.

"That doesn't surprise me," Scott said when asked about the ruling during an unrelated press conference on Friday. "We thought it was constitutional from the start."

Betrayed: Can Gun-Rights Activists 'Take Back Vermont'?
By Paul Heintz
Politics
The law banned the acquisition of magazines that contain more than 10 rounds for a long gun or 15 rounds for a handgun, though people who owned larger magazines before the law went into effect can legally possess them.

Max Misch, known for his online harassment of former state representative Kiah Morris, contended that the ban ran afoul of Article 16 in the state Constitution, which provides "that the people have a right to bear arms for the defense of themselves and the State." Misch is accused of traveling to New Hampshire to buy two 30-round magazines for a rifle, then bringing them to Vermont.

Man Who Harassed Kiah Morris Charged With Buying High-Capacity Gun Magazines
By Derek Brouwer
Off Message
In 2019, then-Superior Court Judge William Cohen ruled against Misch, who appealed to the Vermont Supreme Court. Friday's ruling also incorporated an earlier challenge to the law brought by the Vermont Federation of Sportsmen’s Clubs, the Vermont State Rifle and Pistol Association, and others.

The four justices who considered the case agreed to uphold the statute. They included associate justices Beth Robinson and Karen Carroll, as well as two specially assigned judges, John Wesley and Dennis Pearson.

Cohen, who has since been appointed to the high court, was recused.

In their ruling, the justices defined the scope of the right to bear arms as described in the state Constitution — something the high court had never explicitly done. The justices also ventured to set a standard to determine whether a law infringes on the right.

Misch argued that the right is "without limitation," while the Vermont Attorney General's Office believed it to be more circumscribed.

Gun Groups Sue to Strike Down Vermont's New Magazine Limits
By Alicia Freese
Off Message
The justices found that the right to “bear arms for the defense of themselves and and the State” likely referred to participation in a state militia, making it "essentially obsolete" in the modern world.

They did conclude, however, that the clause allows for a right to bear arms for self-defense "subject to limitations and regulation."

"Whereas we have previously relied on stated or unstated assumptions that the
individual right to bear arms in self-defense exists but is not unlimited, we now expressly hold as much," they wrote.

The government, justices wrote, may regulate firearms under the state Constitution "as long as any enactment is a reasonable exercise of police power and there is a reasonable fit between the purpose and means of regulation."

The magazine ban amounted to a "minimal burden" on the right to bear arms, they concluded, while aligning with evidence that suggests the use of large-capacity magazines is correlated with deadlier mass shootings.

Specifically, they wrote, large-capacity magazines are rarely used for self-defense, citing data that the average number of shots fired in self-defense is fewer than three.

"With the constitutionality of Vermont’s large capacity magazine ban resolved once and for all, our focus is now on the resumed criminal prosecution against Max Misch," Vermont Attorney General T.J. Donovan said in a statement.

Read the full decision below: