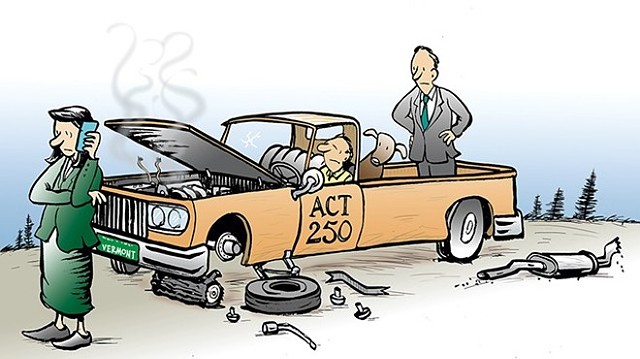 The Vermont Senate on Thursday blocked Gov. Phil Scott’s executive order that would reform how land-use permits are issued under Act 250.

The 22-8 vote by the full Senate follows the Natural Resources and Energy Committee's unanimous vote to reject the order last week.

The governor proposed the change as a way to create a more efficient, predicable and less expensive permit process for developers. Critics blasted the move as stripping local communities of control over projects whose impacts Act 250 specifically left for them to assess.

Related The Governor's Gambit: Scott Seeks to Rewrite Act 250 — Without the Legislature

The Governor's Gambit: Scott Seeks to Rewrite Act 250 — Without the Legislature
By Kevin McCallum
Politics
Sen. Chris Bray (D-Addison), chair of the Natural Resources and Energy Committee, said that unlike a bill, the executive order did not allow for legislative tweaks.

“For us it is quite simply a take-it-or-leave-it proposal,” Bray said.

While he said his committee agrees with the governor’s goals of environmental protection and a predicable permit process, too many questions remained about how the new board would operate, Bray said.

Those included how it would be funded, how appeals would be handled and whether political influence would sway board members appointed by the governor.

“A well-established procedure is proposed to be replaced by a less certain process, contrary to the executive order’s named goals of increased predictability and uniformity,” Bray said.

State law only requires one chamber of the legislature to block the kind of reorganization order Scott issued. His administration argued that that bar is too low and is unconstitutional because it limits the power of the executive branch.

Legislative attorneys disagreed and have advised Senate leaders to follow the law as written, regardless of the administration’s legal theories.

The House Committee on Government Operations took a similarly dim view of an executive order Scott issued to create an Agency of Public Safety.

The panel voted 10-1 on Wednesday to reject that order, arguing that the changes, if merited, should be debated by and approved by the legislature. The full House was expected to consider the order Friday.
Prev
Next