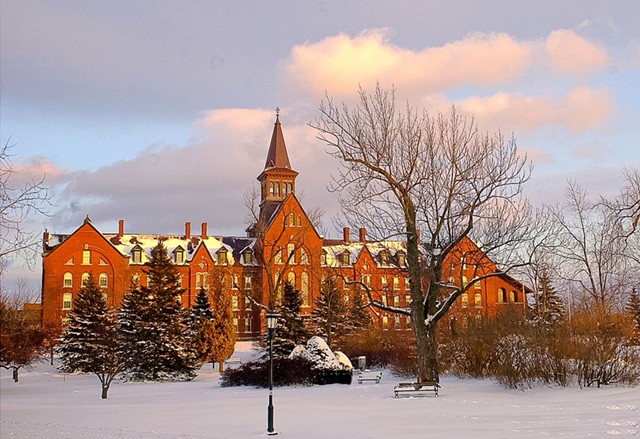 Thousands of students are moving back into college residence halls around Vermont this week in the midst of a winter surge in the ongoing pandemic.

At many schools, the start of the spring semester will resemble the kickoff of the fall term nearly five months ago, with students undergoing a rigorous quarantine and testing process required by the state on their arrival.

Confirmed cases of COVID-19 in Vermont are more than 25 times higher than when students arrived at schools late in August. Back then, daily new case counts hovered around six. This week, they've averaged 160. And in some areas of the country where students live, the levels are much higher.

State and college officials alike are banking on the success of the virus mitigation strategies that kept levels of COVID-19 low on Vermont's campuses during the fall semester.

"We're hopeful," said Tracy Dolan, deputy commissioner of the Vermont Department of Health. "We still think what we're doing is probably the best thing that we can do."

Beyond that, said Gary Derr, the University of Vermont's vice president for operations and public safety, the on-campus strategy resembles the the fall's. Students will be reminded to wear facial coverings, wash their hands and maintain social distance.

Those numbers are expected to soar this semester, however.

"We're preparing to see more positives, just like the state is," said Derr.

During the two weeks ending January 17, 59 students tested positive — more than half the number of positive student tests during the entire fall semester. But those numbers, Derr noted, were reported after the holidays. State officials have confirmed that, based on their contact-tracing data, Christmas gatherings helped drive a surge in cases.

"I think what we're expecting and hoping for is that that [weekly case number] will start to drop," said Derr.

If students fail to show up for weekly testing, the penalties can be steep. The tests are mandated by the school's Green and Gold Promise, which lays out student conduct requirements during the pandemic. Students in "egregious" violation of the pledge may be fined $250 on their first offense, and suspended on the second.

A UVM spokesperson said the school fined 799 students for violations during the fall semester, and suspended nine.

Though many campus strategies will be the same this semester, one thing will look different: Because of the statewide ban on multi-household gatherings, schools must define what a "household" means on their campuses, and ask students to restrict non-academic gatherings to members of their "household."

That will look different from campus to campus, depending on how each school's housing is set up, explained Dolan. "We asked colleges to keep with the spirit of what we were trying to do with social gatherings," she said.

At a student town hall earlier this month, officials at St. Michael's College, which reported 79 cases during the fall semester — with dozens connected to a hockey-related outbreak in Montpelier — urged students to abide by the household restrictions. The school defines a household as either the residents of a townhouse, suite, or apartment, or, for those in single and double rooms, up to four people from the same wing of a residence hall.

Abiding by these rules is especially important as reports of a more contagious variant, first discovered in the United Kingdom, continue to spread, said Mary Masson, director of student health services at St. Mike's. Though the variant has not yet been identified in Vermont, it's been reported just over the border in New York State.

"It tells us that we have to be all the more vigilant," said Masson.