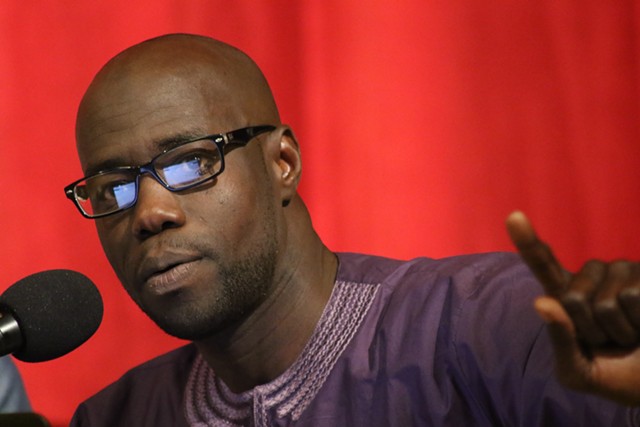 
Councilor Ali Dieng (I-Ward 7) introduced the resolution, saying the council vote in June to dramatically cut the police force and invest in social services was a "knee-jerk reaction" to activists' demands. The question he's proposed would ask voters if the city should increase the department's authorized headcount from 74 officers to 84.

Non-binding means the council would not be required to adopt the change, even if a majority of voters approve it.


"The people being policed — none of them have been part of the conversation. It's only those who are vocal," said Dieng, who is running for mayor. "They speak up, and that's it. The council makes a decision. I want to hear from everyone."

Nearly seven months ago, councilors voted to reduce the department by 30 percent through attrition, from a maximum of 105 sworn officers to 74. The department employed 90 active officers at the time.

Cut the Police: The Bid to Slash Law Enforcement Funding in Vermont
By Dan Bolles, Derek Brouwer, Colin Flanders and Courtney Lamdin
Crime
Since then, the roster size has dropped to 83 officers, with 79 who are considered "deployable" for duty. Acting Police Chief Jon Murad has warned that reaching a headcount of 76 would force the department to cease proactive coverage between 3 and 7:30 a.m. Officers would remain on duty but would only respond to the most serious calls, he said.


Murad expects the department could lose several more officers before year's end — to other jobs, military deployments or retirements — bringing the roster down to 59 sworn officers.

Burlington Police Chief Proposes Civilian Reinforcements for Shrinking Force
By Courtney Lamdin
Off Message
At a press conference last month, Murad expressed frustration that city leaders haven't presented a new public safety model as promised during June budget talks. The council had ordered up a "functional assessment" of the department's operations, but a council subcommittee has not yet hired a consultant to perform that research.

In the meantime, Murad has proposed that the city hire civilian staff to respond to various calls. His two-year plan, endorsed by Mayor Miro Weinberger, calls for hiring 12 "community service officers" to take on non-emergency tasks and six "community service liaisons" to assist people experiencing homelessness, mental health crises and substance use disorder.


In a statement Tuesday, Weinberger noted that he, too, has proposed raising the police staffing level to 84. But the mayor said he wants the council to act on that proposal at its January 25 meeting, instead of waiting to hear from Burlingtonians on Town Meeting Day.

"I oppose Councilor Dieng’s proposal to delay action and dodge Council responsibility for fixing the problem it created," the statement says. "The City Council should not need a vote of the public to understand that we need a well-resourced and professional police department ... even as we explore the possibility of responding to some of these calls in new and different ways."
Prev
Next