Plenty of Police, but No Protesters, Turn Out at Vermont Statehouse on Sunday | Off Message 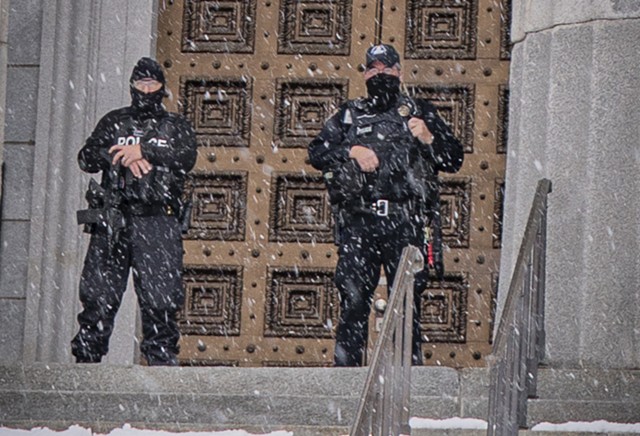 Despite concerns about armed unrest Sunday at statehouses around the nation, the only things descending on Montpelier were anti-fascists and snowflakes — the latter the frozen kind.

Noon came and went at the snowy Vermont Statehouse with no armed protesters in sight, leaving little for the assembled journalists to document beyond heavily-armed state troopers on foot patrol and a guy with a handwritten badge that read "Anti-Fascist Riot Prevention Volunteer," whose head was encased in  a gas mask that looked like it might have seen duty in a world war.

“I’m wearing it just in case,” said Montpelier resident Thomas Gram, who added that the device served the dual purpose of protection against COVID-19 and any tear gas he might encounter.

Gram and Belynda Jestice of Plainfield had wandered down to the Statehouse from a group of counter-protesters in front of Montpelier City Hall. Jestice said she was relieved that there was no armed protest to counter.

“We wanted to send the message that they can’t come here and do what happened in D.C.,” Jestice said. 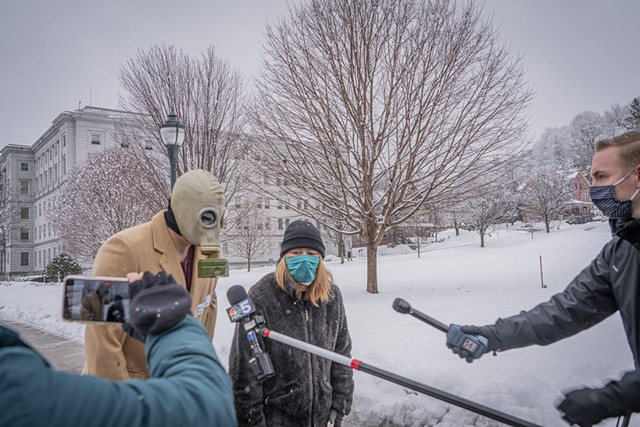 Law enforcement officials and political leaders have for days been encouraging any would-be protesters to consider assembling at the Statehouse another time given how the demonstration at the U.S. Capitol on January 6 morphed into a violent insurrection. They also asked people planning to demonstrate in favor of their Second Amendment rights to consider leaving firearms at home.

Police broadcast their increased presence in the city and at the Statehouse, but didn't reveal details of how many officers from state and local agencies were on hand.

A community organization called Neighbors Together Against Fascism had originally invited people on Facebook to an event at the Statehouse, but moved it to Montpelier City Hall to avoid the prospect of a confrontation. There, people ate food, waved signs and even had a snowball fight on Sunday afternoon.

Shaun Stephens, a social justice advocate from Montpelier, helped tape a cardboard Solidarity Against Racism sign on a light pole in front of city hall, where a number of groups, including Pancakes for the People, had assembled. He and others had come to help deescalate any conflicts that might arise between rival protests.

“Hopefully, it’s all unnecessary and we can just enjoy some food and music and then go about our lives,” Stephens said.

A local printmaker who only gave his first name, James, handed out signs that read Freedom + Unity Against Fascism and Mutual Aid, Not Lies and Hate.

Stephens said no one wanted conflict, and he was relieved none materialized.

“In this pandemic, more than ever, we just need to be here to help each other and look after one another,” he said. 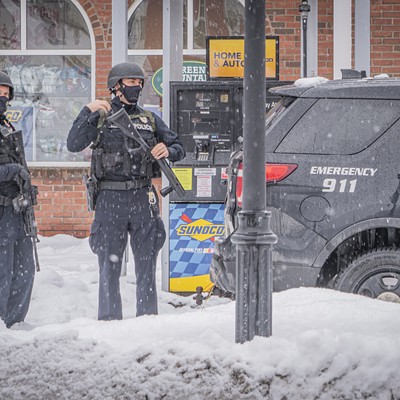 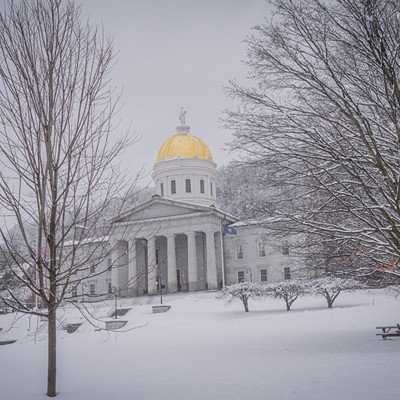 No Protesters at Heavily Guarded Statehouse
By Terry J. Allen
Click to View 16 slides
Prev
Next