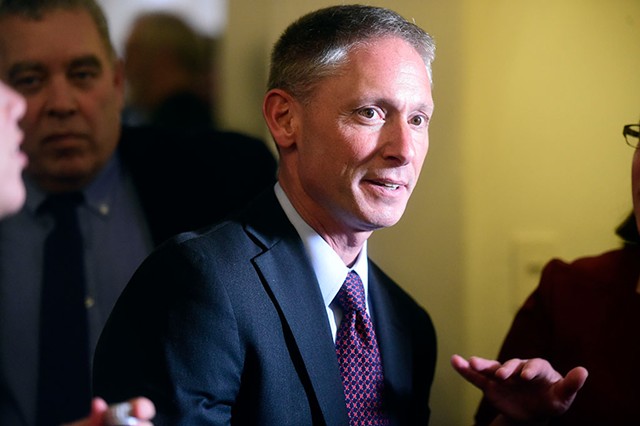 Vermont officials said on Friday that they have no way to ensure that dozens of people who rode a charter bus this week to a Trump rally in Washington, D.C., actually abide by state quarantine rules.

Those rules require anyone entering Vermont from out of state to quarantine for two weeks upon arrival. Rather than impose penalties for violations, the state has adopted a policy of educating people about the rules.

A busload of Trump supporters left South Burlington on Tuesday night, spent Wednesday at the rally — which morphed into a siege of the U.S. Capitol by pro-Trump extremists — before returning by bus early Thursday morning.

Related After Riots at the Capitol, Busload of Vermont Trump Supporters Returns From D.C.

After Riots at the Capitol, Busload of Vermont Trump Supporters Returns From D.C.
By Derek Brouwer
Off Message
It's unclear whether any Vermonters were among the group that entered the building. Public Safety Commissioner Michael Schirling said at a COVID-19 briefing Friday that he couldn't comment on ongoing investigations, but that Vermont law enforcement is cooperating with federal officials as they investigate Wednesday's events.

After hearing about the trip, Schirling said, the state contacted the bus driver, who agreed to make an announcement to the passengers about the quarantine requirements. Travelers can end quarantine early if they receive a negative coronavirus test after one week.


Schirling noted that travel restrictions are a matter of personal responsibility, not the responsibility of interstate transit operators. He said the state doesn't have a list of passengers, hasn't compiled one and hasn't contacted the riders directly.

But, Schirling said, he and other officials are concerned about transmission resulting from the trip.

"There's certainly enhanced risk as a result of the proximity and the lack of masks," said Schirling.

Video posted to Facebook showed a bus full of maskless passengers, chanting and conversing. There were 51 people on the 55-seat bus, according to an account of the trip written by co-organizer Ron Lawrence, the chair of the Essex Republicans.


The Agency of Commerce and Community Development's cross-state travel guidance says that "private charter buses ... should only be used if density is reduced to allow for social distancing. This includes reducing capacity to 50 percent, leaving every other seat empty, and every other row open. Cloth face coverings must be worn."

Schirling said he would follow up with the bus company for an "educational conversation" on the state's capacity restrictions.

According to Lawrence's account, everyone on the bus had their temperature taken, and no one had a fever or reported symptoms of illness.

Though Lawrence wrote that he planned to quarantine, "it would be a mistake to say that we should all behave in the same way ... there is no indication that anyone is sick."

Health Commissioner Mark Levine said the state doesn't have the power to enforce a quarantine for those who have not tested positive for COVID-19. But he urged those on the bus to quarantine "for your safety, and out of consideration for your fellow Vermonters and your communities.

"We all rely on each other to do our part to keep the virus from spreading," he said.
Prev
Next