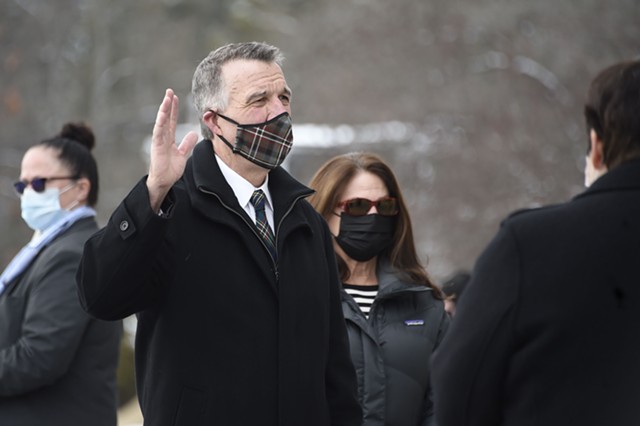 Vermont political leaders on Thursday condemned the violence in the U.S. Capitol and echoed Gov. Phil Scott’s call for President Donald Trump to be removed from office.

On a day that would normally have focused on pomp and circumstance as new leaders took oaths, as well as discussion of priorities for the legislative session, the leaders reframed their messages to address the crisis.

Scott was one of the earliest Republican leaders in the nation to blame Trump for inciting the mob that stormed the Capitol, calling for him to “resign or be removed from office by his Cabinet, or by the Congress” just hours after police regained control of the Capitol Wednesday afternoon.

During his inaugural address Thursday evening, Scott, who has made no secret of his distaste for Trump, opened by laying responsibility for the violence directly at the president’s feet.

“It was a shocking attack on our democracy, and make no mistake: President Trump is responsible for fanning these flames,” Scott said, when his live address started just after 7 p.m.

The new leaders of the legislature, House Speaker Jill Krowinski (D-Burlington) and Senate President Pro Tempore Becca Balint (D-Windham) both used their televised rebuttals to Scott’s address to lend their voices to the chorus of condemnation.

“While many of us watched in horror as the assault on our democracy occurred live on national television, I knew that our state would not stand idly by and we would confront the most dangerous moment in our nation’s history head-on,” Krowinski said. She noted that earlier that day, the House had passed a resolution calling for Trump to be removed from office; the vote was 130-16.

Balint, taking the podium before a marble bust of Abraham Lincoln in the Statehouse, said, “The last 36 hours have shaken us.”

“I know I speak for so many Vermonters when I say that I watched in sadness, alarm and disgust as the scenes that unfolded at our nation's Capital yesterday,” Balint said.

The chaos was all the more jarring, she said, because it came on the same day that the Vermont Senate had sworn in its new members, each of whom, regardless of political party, vowed to protect and uphold the constitutions of state and the nation.

Balint said she was proud to watch her fellow citizen legislators take the oath and make a “clear and public commitment to the rule of law, to the people and to the ideals of this great state.”

During her swearing-in ceremony as lieutenant governor, Molly Gray shared her “sadness and disbelief” at the turn of events, and she praised Scott’s leadership for his call for Trump’s removal.

“Let the record forever reflect that this was an attack on our democracy, constitution and most dearly held principles by a sitting president,” Gray said.

Several leaders expressed hope for the restoration of faith in government and that, somehow, Vermont could help show the nation the way out of the dark place it finds itself.

“From our communities to this chamber, let us set a tone of civility, cooperation and productivity, and do our part to restore and strengthen faith in good government,” Gray said.

Legislative leaders touched on a host of issues they hope to address this year: broadband internet access, better childcare, clean energy and pandemic relief among them.

Scott spent a good deal of his speech recounting the pandemic’s arrival in Vermont, the state and residents’ responses to it, and the work that still lies ahead.

“It’s important to know the actions you took, sacrifices you made, and your decision to listen to the experts and the science, saved lives. You are saving lives," Scott said.

His address was largely devoid of any new policy initiatives, though the governor expressed the need to improve Vermont’s education system, broadband capacity, and housing stock; foster economic development equally across the state; and attract more residents to combat demographic trends that are the state’s Achilles' heel.

He insisted, however, that Vermont must live within its means and not burden businesses and residents with higher taxes, instead calling on the state to find efficiencies.

Two ideas he mentioned involve expanding tax increment financing districts to help more towns with redevelopment and a reorganization that would place “child development work” under the Agency of Education. More details will be unveiled during his budget address later this month.

Scott expressed optimism that if COVID-19 vaccinations can increase from today’s 20,000 to 120,000 by the end of the winter, then the state can begin to return to a place where people can safely gather and travel without quarantine.

“It’s our hope that sometime this summer—possibly earlier—we’ll reach the point where life will begin to feel normal again,” he said.

He closed on an optimistic note.

“My fellow Vermonters, we will get through this. We’ll have scars to show and stories to tell but that will only make us stronger. And once more, together, we will rise,” he said.