Vermont lawmakers booted up a new legislative session Wednesday, heartened to elect a historic all-female leadership team but also humbled by the challenges posed by a pandemic forcing them to draft laws in isolation.

Two-thirds of the 30-member Senate convened in person in the Statehouse Wednesday morning, while the 150-member House of Representatives met  remotely, with just a handful of lawmakers gathering in the House chamber.

Among their first acts as legislative bodies, each elected a woman to lead them — a first for the state and a cause for celebration. As expected, the Senate elected Sen. Becca Balint (D-Windham) as its president pro tempore, succeeding Tim Ashe, who did not seek reelection in order to pursue a losing bid for lieutenant governor. 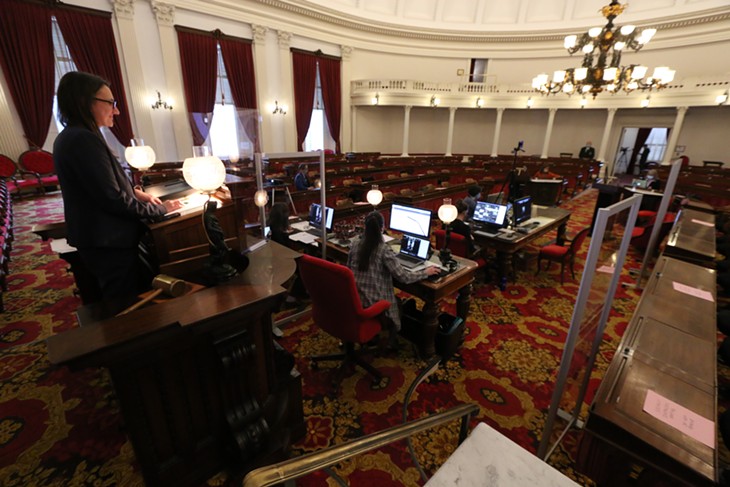 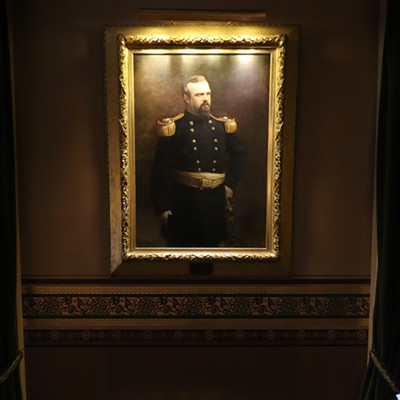 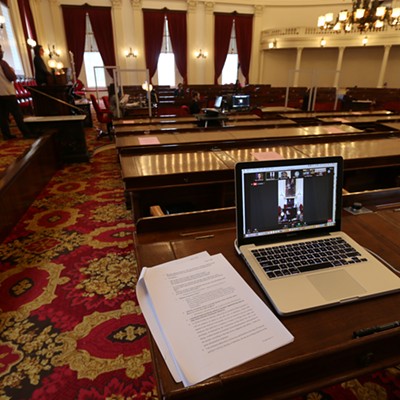 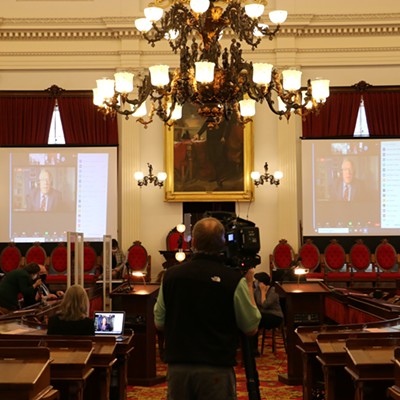 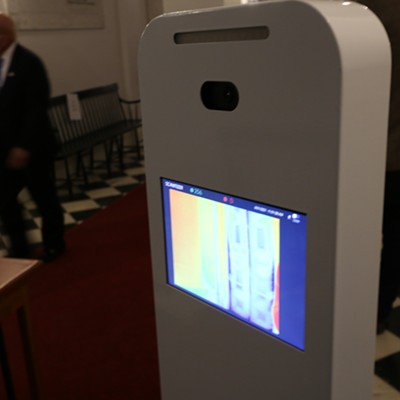 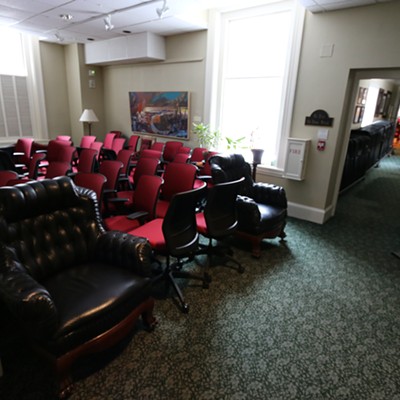 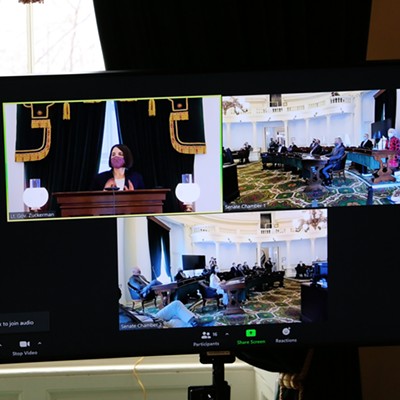 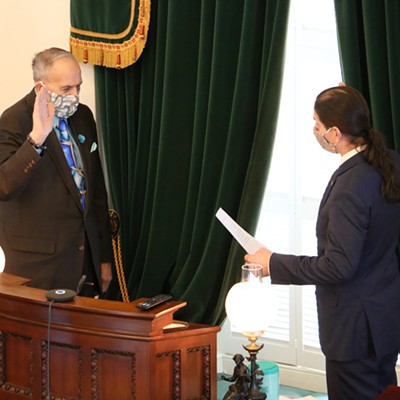 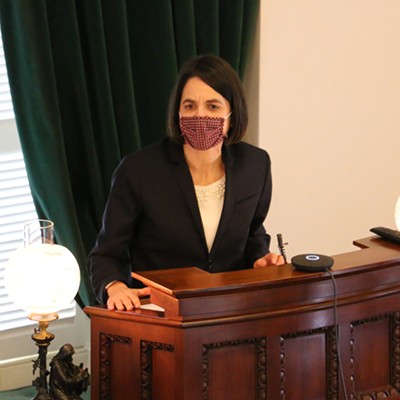 And yet the need for lawmakers to continue to meet remotely weighed on many minds.

“The form of our work right now is not ideal,” Balint said in her opening remarks to her colleagues. “We can feel isolated, cut off from each other. And we know we cannot do our best work in isolation.”

Balint had signaled before Wednesday that the pandemic will continue to be the Senate's main priority, and that remote meeting constraints would force lawmakers to scale back aspirations for complex legislation like major Act 250 reform.

She stressed that lawmakers must remain vigilant and focused on helping Vermonters weather the ravages of the pandemic.

“The entire country is weary from the pandemic, but the virus doesn’t care,” Balint said. “We must continue to address the disease caused by the health emergency and the fear and doubt that our constituents feel.”

Sen. Brian Collamore (R-Rutland) praised the choice of Balint as pro tem, calling her thoughtful, fair and funny, with a “good-natured outlook” that senators deeply appreciate.

Balint was first elected to the Senate in 2014 and since 2017 has served a majority leader.

“If you’re having a bad day, running into Sen. Balint can change that quickly," Collamore said.

Due to its smaller size, the Senate was able to hold its inaugural session with only limited protocol changes. Senators were sworn in in groups. They spread out around the chamber. Access for the media and special guests was limited. And plexiglass guards were installed at the rear of the chamber to create a barrier between senators and the few members of the media and public  allowed in.

The Statehouse has been largely unused since last March, and it showed. Chairs removed from committee rooms were stacked up in hallways. The cafeteria remained dark.

The building had a new feature: heat-sensing scanners that check people for fevers at the entrance.

Sen. Joe Benning (R-Caledonia) quipped that that center of the normally technology-free chamber, where Senate Secretary John Bloomer and his assistant sat surrounded by computers, huge screens and cameras live-streaming the proceedings, made it “look like the bridge on the Starship Enterprise."

Unlike the Senate, the House’s opening ceremonies needed to be almost entirely remote.

Standing at the rostrum in a nearly empty chamber behind a plastic partition, a masked Krowinski made clear that the House will remain laser-focused this year on pandemic-related issues, declaring the start of the “coronavirus recovery session.”

“We gather here for a session like no other,” the new speaker told her colleagues. “The echoes of the Statehouse are quiet. The hallways of the capitol are still. Yet our work begins now, at the fall of the gavel.”

Krowinski, who was appointed to the House in 2012 by then-governor Peter Shumlin and went on to become majority leader in 2017, said the pandemic has demonstrated the large gaps in essentials such as broadband, childcare, housing and mental health.

“We’ve seen too many Vermonters struggling to balance their needs,” she said. “The responsibility before all of us is to provide our constituents with the support they need right now.”

The House also voted to give itself the authority to continue meeting remotely for at least the next two months, and elected a new clerk to replace outgoing parliamentarian Bill MaGill. BestyAnn Wrask, a Waterbury resident and member of the legislative counsel team, will now help ensure that representatives are following the House’s arcane rules and procedures.

The Senate also passed a slate of new rules to ensure that in future health emergencies, committees can meet remotely — under strict rules for public notice and access — without having to meet in person to pass such rules, as they did last year.

Colburn, the first female leader of the House Progressive caucus, said while it is noteworthy that all legislative leaders are either women or, in the case of Sen. Randy Brock (R-Franklin), people of color, much work remains to be done to improve inclusion through state government.

Brock said he was pleased to be named minority leader for a caucus that has grown from six to seven this year, and he hoped to use that position to ensure vigorous policy debates continue to take place.


"This gives me an opportunity to help marshal our forces and our voices and to make sure that we will contribute to the conversation and continue to add value," Brock said.


Despite the restrictions of the Zoom sessions, freshly minted Sen. Josh Terenzini (R-Rutland) said he was overwhelmed with excitement in anticipation of the work ahead.

“I take this position very seriously and want to serve my constituents with the dignity and the respect this office deserves,” said Terenzini, whose wife, Jessica, and 4-month-old son Grant were on hand to witness his swearing in.

Yet Terenzini, whose father Tom Terenzini is a Republican representative from Rutland, acknowledged the remote meeting requirements of his first session will make it tougher for all freshman lawmakers to get up to speed.

“I have a lot of learning to do quickly, and unfortunately, in the first few months at least, it’s going to be by Zoom rather than making relationships with my colleagues and being able to have those discussions and conversations in the hallways and the cafeteria of this great building."
Prev
Next