by Derek Brouwer and Andrea Suozzo 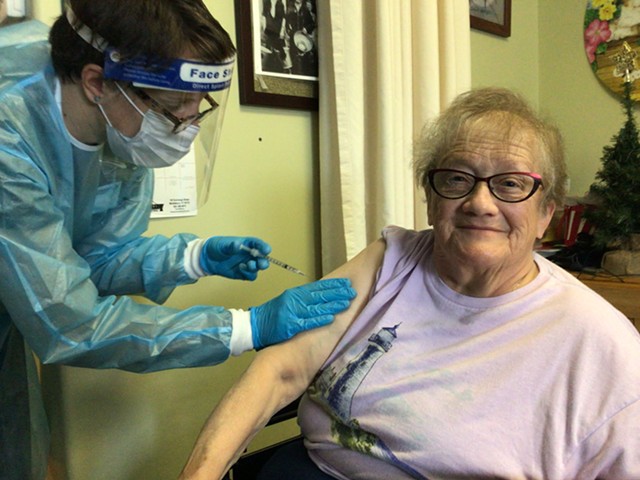 A team of pharmacists jabbed more than a hundred residents and staff of Helen Porter Rehabilitation & Nursing on Monday morning, making the Middlebury home among the first long-term care facilities in the country to begin receiving doses of a COVID-19 vaccine.

More than two-thirds of residents received their first shots in their rooms, while half of the home’s workers took turns getting inoculated in a common area. The clinic marked a milestone in the fight against a virus that has proven especially devastating to nursing homes.

Vermont began receiving shipments of the Pfizer-BioNTech vaccine last week, and distribution of the vaccine is ramping up this week in hospitals and long-term care facilities around the state.

Health commissioner Mark Levine said Tuesday that 3,141 Vermonters had gotten their first vaccine dose as of last week. That number doesn't include the clinics at long-term care facilities such as Helen Porter, which began on Monday. Levine said the state will begin reporting totals from those vaccination clinics sometime this week.

By the end of the week, officials expect to have received 22,125 total vaccine doses — including 11,400 doses of the Moderna vaccine, which the U.S. Food and Drug Administration authorized Friday. Of those, 3,400 are allocated to long-term care.

After a November surge, case growth rates in Vermont have stabilized and begun to decline. But the state is still tracking outbreaks in 11 long-term care facilities, with a combined 485 cases. Residents of such homes account for more than 70 percent of the state’s COVID-19 deaths since March, according to state officials.

Though the state designated long-term care residents, along with health care workers and first responders, as the first priority to be vaccinated, the process will take several weeks.

The federal government is managing the vaccination drive at nursing homes through a partnership with CVS, Walgreens and HealthDirect pharmacies. A portion of the state’s weekly vaccine allotment is shipped directly to the pharmacies, which are scheduling clinics at homes.

The vaccines are optional, and each home must secure residents’ consent ahead of their clinic dates. Birchwood Terrace, in Burlington, the site of an outbreak last spring, announced last week that CVS will perform the home’s first clinic on January 5.

Leaders at Helen Porter had about two weeks to plan for Monday’s event, which was administered by HeathDirect. Fromhold said the home has seen “a very high acceptance rate” among its 80 or so residents.

Administrator Mary Jane Nottonson said HealthDirect will return to the facility on January 11 to give booster shots to those who already received their first dose, as well as first doses to the remaining residents and staff who want one. A third clinic is scheduled for February 1, she said.

The home staggered the inoculation process for its 125 staff because the vaccines can trigger mild symptoms that could disrupt the workforce. Nottonson said only one employee had called in sick Tuesday.

Helen Porter has not had a COVID-19 outbreak, but its residents have endured lockdowns and isolation for more than nine months.

“The thought that this is kind of a first step toward moving us eventually to a place where we could be more open again,” Fromhold said, “is really exciting.”