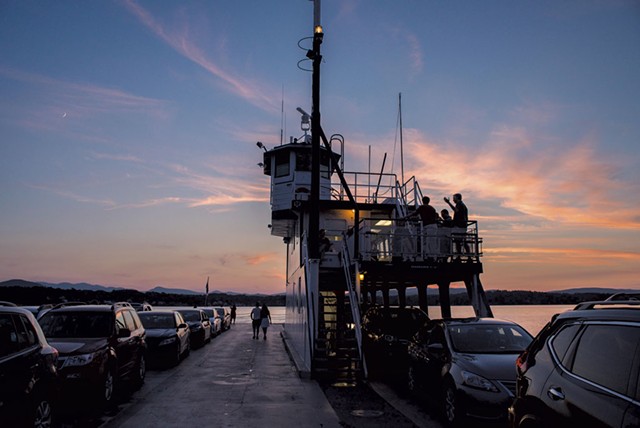 Five days a week, Tara Smith and her two sons take the 8 a.m. ferry from Charlotte to Essex, N.Y., for work and school.

The North Ferrisburgh mom is vice president for programs at an educational nonprofit based on Main Street in Essex; her job sometimes requires that she works in-person with students at North Country schools. Her boys, ages 3 and 6, attend the Lakeside School at Black Kettle Farm, just a few minutes from the Essex ferry dock.

Smith has been commuting to work on the ferry for about eight years. But starting January 4, she’ll have to figure out an alternative option — as will others who rely on the route for professional, educational and medical reasons. That's the day the Burlington-based Lake Champlain Transportation Company will suspend Charlotte-Essex ferry service.

“Due to the significant decrease in ridership as a result of the pandemic, LCT has temporarily suspended service at our Charlotte/Essex Crossing and consolidated our resources to maintain service at our Grand Isle/Cumberland Head Crossing,” the company said in a statement on Friday. “We will resume service at our southern crossing as soon as we are able.”

This isn’t the first time this year the company has halted the route. In the early days of the pandemic, it shuttered the service from March 19 until May 1. During that closure, the company received nearly $1.4 million through the federal Paycheck Protection Program, according to a database of such loans compiled by the Washington Post.

Regular riders say that this impending suspension is different. In the winter time, alternate routes on often-slippery smaller roads are an unappealing and possibly dangerous option. And some question the validity of the company’s statement that ridership is down.

Smith called the decision “unsettling.” The announcement came without warning, she said, and the company has given no timeline for when they will resume service. She said her alternate commute — driving south to cross via the Lake Champlain Bridge and then heading north on the New York side — would add about 20 to 30 minutes to her trip and require that she drive on sometimes treacherous back roads.

She also questions whether ridership has actually declined. On the first ferry that comes from Essex to Charlotte, she said, there are usually around 10 cars.

Related Ferry Service Between Charlotte and Essex, N.Y., to Be Suspended

Ferry Service Between Charlotte and Essex, N.Y., to Be Suspended
By Molly Walsh
Off Message
Dr. Jess Veltkamp concurs. The obstetrician-gynecologist lives on Ferry Road in Charlotte and has been commuting to her private practice at Champlain Valley Physicians Hospital in Plattsburgh via the Charlotte-Essex ferry since 2014. She says the crew members are like family to her.

Veltkamp calls the ferry her “lifeline” and said ridership hasn’t seemed sparse when she rides it in the early morning and evening. When the ferry is suspended, her only choice will be taking the Grand Isle-Plattsburgh ferry, which is what she did during the spring shutdown. She said the change will increase her commute from 70 minutes to 90 minutes each way, and will substantially increase the time she’s spending on snowy roads in the winter.

In a petition he started to keep the ferry open, Essex, N.Y., town supervisor Ken Hughes characterized the suspension as “a devastating turn of events for those who rely on its service for professional, educational, medical and other related needs.” He also noted that Essex County and the Adirondacks may be hurt economically by the decision. The change.org petition had garnered about 1,750 signatures as of Friday afternoon.

“It’s the fastest way by far for me to get to my doctor in Burlington. Will be 2 extra hours travel each time...If you had interstitial lung disease (like I do)... that extra time can be critical.. and I use that Ferry a LOT..!!” one signer said.

“I am a RN in the OR at UVMMC in Burlington. I live in Westport. This ferry should be an essential service, considering the patients and health care workers who use it,” wrote another.

The closure will also affect some New York schoolchildren. Six students from Essex County commute to the Lake Champlain Waldorf School in Shelburne five days a week. Head of school Jas Darland said she’s frustrated that “an essential transportation service which provides a public good is privatized and held for profit.” She said she hopes the company “will engage in some sort of community dialogue to see if an option can be found that meets everyone’s needs.”

In an interview on Thursday, town supervisor Hughes said he knows of an Essex County-based carpenter who travels to South Burlington to get materials, as well as truck drivers who use the ferry to go to Vermont for work. He also said there are sick New Yorkers who rely on the ferry to travel to the University of Vermont Medical Center for cancer and dialysis treatments.

Hughes plans to present a resolution to the Essex town board on December 29 asking them to request continuation of ferry service; he is also appealing to county and state legislators for help. The ferry has periodically shut down for extended periods of time due to ice on the lake, Hughes said, but that’s obviously not the case this year. Essex residents have told him how dismayed they are that a decision like this can be made without any discussion with the ferry users.

“I question whether those human situations are actually thought of when the decision is made to close the ferry down,” Hughes said.

So does Beatrice Disogra. For 14 years, the nurse commuted on the ferry from her home in Willsboro, N.Y., to her job at the UVM Medical Center. As the Lake Champlain Transportation Company continually scaled back Charlotte-Essex service little by little, Disogra sold her house last year and moved to Cumberland Head, N.Y. — just a mile from the Plattsburgh-Grand Isle Ferry — to make her commute easier.

Disogra said she’s skeptical that the company will respond to the grassroots effort to reverse the decision, noting they’ve been unresponsive to customer feedback in the past.

“They don’t have to answer to anyone,” she said. “That’s the problem.”

She added: “Do I have faith in them to do the right thing? No.”
Prev
Next