First Doses of COVID-19 Vaccine Arrive in Vermont | Off Message 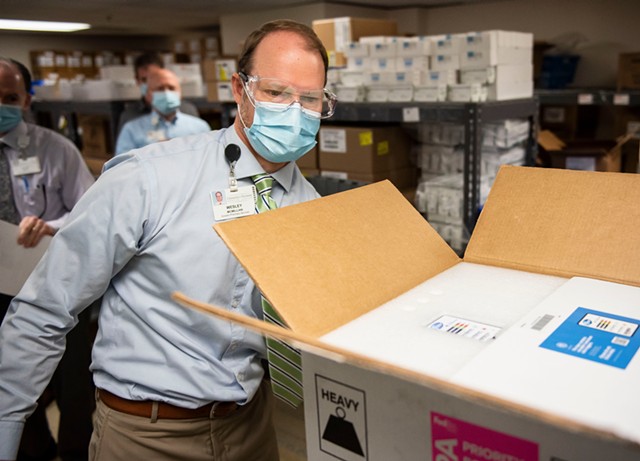 The first 1,950 COVID-19 vaccination doses arrived in Vermont on Monday, and state officials heralded the delivery as a turning point in the fight against a pandemic that has sickened thousands of Vermonters, killed nearly 100 and led to an extended state of emergency.

“This is a pivotal moment, one that marks the beginning of the end of the pandemic,” Health Commissioner Mark Levine said in a statement.

The Pfizer-BioNTech vaccine was only approved via an emergency authorization by the U.S. Food and Drug Administration last week. Vermont is expected to get 5,850 doses this week, according to the Department of Health.

The initial shipment was divided up between the University of Vermont Medical Center and the State Vaccine Depot, which each got 975 doses, according to the department. State officials have said that Vermont will first immunize health care workers, first responders and residents of long-term care homes. Initial shipments will not be enough even for that population, however.

“This is an important milestone and an essential step toward defeating a virus that’s devastated families and businesses throughout Vermont and around the globe,” Gov. Phil Scott said in a statement. “There is no better, safer or faster way to defeat this virus and work to rebuild our economy than a successful effort to make vaccines available to every single Vermonter."

The Big Jab: Vermont Preps for First Shipments of COVID-19 Vaccine
By Derek Brouwer
Coronavirus
UVM Medical Center's allotment will go to its staff and to some "community health care workers," according to Neal Goswami, who said more details would be forthcoming.

Later this week, another 1,950 doses of the Pfizer-BioNTech vaccine are to ship to pharmacies in Vermont that are under federal contract to immunize residents of long-term care homes.

Another vaccine, made by Moderna, could get a similar emergency authorization later this week — and some doses would also be shipped quickly to Vermont.

Health officials warned that it will be months before the supply of vaccines is available to the general public. Kristin Baker, nurse manager at the UVM Medical Center's emergency room, urged people to continue to take precautions. She also said that she was "beyond grateful" that her team would soon be able to get jabbed.
Prev
Next