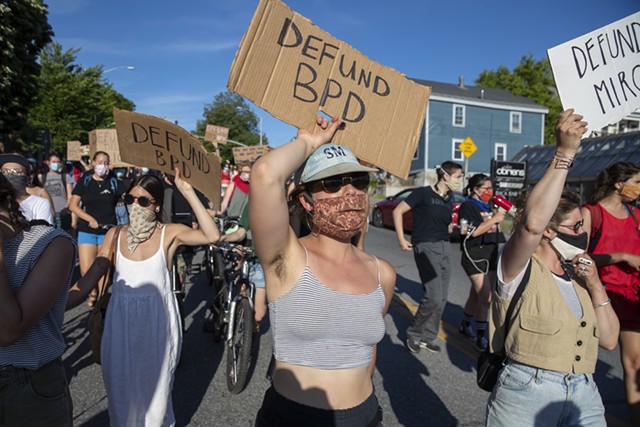 The Burlington police force is shrinking and the city needs a plan to replace the cops who have left, acting Chief Jon Murad said during a press conference Friday.

The department has 81 sworn officers, nine fewer than it did in June when the city council passed a resolution to reduce the force by attrition to 74 cops. Five of those cops said in exit interviews that they're leaving because of the council's efforts to "defund the police," Murad said.

And Murad expects the numbers to keep dropping. Two officers are expected to leave by early January, bringing the roster to 79. Six others could also leave next year: Three who are seeking other employment, two who will be on long-term military deployments and one who is taking a family leave. Still others could be tapped by the Vermont National Guard to help distribute the COVID-19 vaccine, Murad said.

When the number hits 76 officers, the department would have to cease coverage between 3 and 7:30 a.m., according to the chief. The officers on duty would be assigned to staff the police station and would only respond in person to the most serious calls, he said.

The shift "is not something that we are thinking about ending lightly," Murad said. "This is a serious move."


Between now and September, 12 officers are eligible for retirement, according to Murad. If they all left, it could leave 59 sworn officers, including 28 on patrol; there are currently 41 on patrol, Murad said.

The department is proposing that the city hire civilian staff to bolster its ranks. A two-year plan calls for hiring 12 "community service officers," who would provide animal control, deliver subpoenas, take fingerprints and other non-emergency tasks. The department currently has two such staffers.

The plan would also add six "community service liaisons," who are akin to social workers and would respond to calls from people experiencing homelessness, mental health crises and substance use disorder.

"That is the best option we have of moving forward for public safety in the shortest term that delivers the kinds of services that our community expects," Murad said of his plan.

Burlington City Council Votes to Cut Police Force Through Attrition
By Courtney Lamdin
Off Message
Murad said he's proposing the staffing model because city leaders haven't provided the department with their vision of a new public safety model. The council's June resolution called for a "functional assessment" of the department's operations, but six months later, that process hasn't begun, he said. The report was due to the council in October.

Kyle Dodson — the former Greater Burlington YMCA president who Mayor Miro Weinberger tapped as his director of police transformation — attended the press conference and acknowledged that the process has taken longer than anticipated. He said he expects the assessment to be under way by early next year.

"The sooner we have that information, the better off we'll be," Dodson said.


Murad said that the department "would certainly like" city councilors to reconsider their stance on staffing. He wants permission to begin recruiting now since it can take 14 months to get a new hire on the road; he expects the force to dip below 74 before then. "I would also like an opportunity to have the officers here understand that there's a level of support that doesn't cause them to to move on," the chief said.

Cut the Police: The Bid to Slash Law Enforcement Funding in Vermont
By Dan Bolles, Derek Brouwer, Colin Flanders and Courtney Lamdin
Crime
Murad has discussed his proposal with the the mayor and said he hopes to set up a work session with the council later this month.

But he also made clear that he'd prefer to hire more cops, saying that the department really needs 96 officers, the previous average staffing level before the council's resolution.

During budget talks in June, Murad warned the council against making immediate cuts to the force .

"You can't turn off the only responsive agency without building viable alternatives," he said then.
Prev
Next