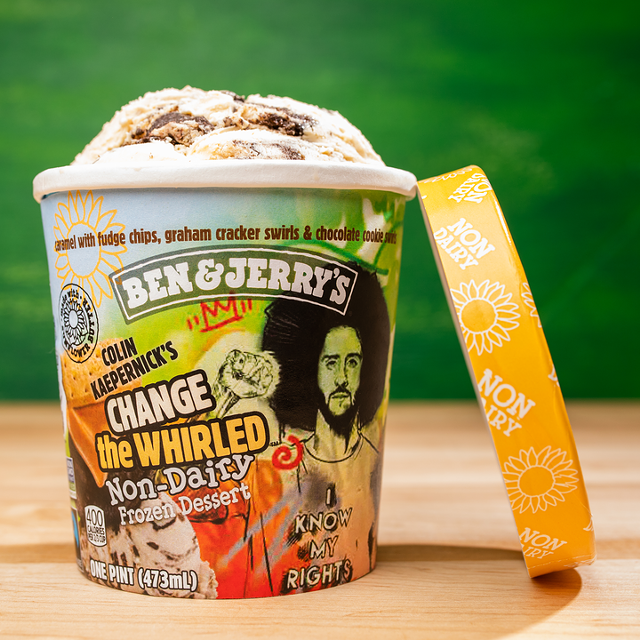 The 33-year-old former NFL quarterback is a vegan, and his “Change the Whirled” flavor will be too: It’s a non-dairy "frozen dessert," with a sunflower butter base that’s filled with caramel, fudge chips, graham cracker and chocolate cookie swirls. A portion of the proceeds will go to Know Your Rights Camp, a nonprofit Kaepernick started in 2016 to “to advance the liberation and well-being of Black and Brown communities.”

In a statement, Kaerpernick called it an honor to work with the Vermont-based ice cream maker, which has been especially vocal in recent years in its calls for racial, social and criminal justice.

“Their commitment to challenging the anti-Black roots of policing in the United States demonstrates a material concern for the wellbeing of Black and Brown communities,” Kaepernick said. “My hope is that this partnership will amplify calls to defund and abolish the police and to invest in futures that can make us safer, healthier, and truly free.”

Kaepernick last played in the NFL in 2016, the same year he started kneeling during the national anthem before games to protest police violence against Black people. Some other players took up the cause, but it was Kaepernick who took the brunt of the backlash as teams effectively blacklisted him. President Donald Trump even took aim at the controversial player during campaign rallies.

In the years since, Kaepernick has turned to full-time activism, including work with his nonprofit, which runs camps that teach kids about their rights during encounters with police and “to make sure they have the resources, the access and the knowledge to be able to better their future,” he’s said.

Kaepernick is just the second Black man honored with his own Ben & Jerry’s flavor, according to the company’s communications director, Sean Greenwood. The first was the late reggae legend Bob Marley, whose “One Love” flavor was released in the U.S. in 2017.

Change the Whirled hits shelves in January and will be available in the U.S., Switzerland, the Netherlands, the United Kingdom, Germany and Ireland.

In a statement, Ben & Jerry’s CEO Matthew McCarthy called Kaepernick the “perfect partner” as the company “continue[s] to advance our work on issues of racial justice.”

“We deeply respect how Colin uses his voice to protest racism, white supremacy and police violence through the belief that 'love is at the root of our resistance,'” McCarthy said.

While COVID-19 has shut down events run by the Know Your Rights Camp, the nonprofit has been busy distributing more than $2 million through its COVID-19 relief fund and legal defense initiative, among other efforts, said spokesperson Kerem Ozguz.

“White supremacy and anti-Blackness didn’t show up with COVID-19 or the murders of George Floyd and Breonna Taylor,” he said in an email. “However, the convergence of the events of 2020 has underscored the depth of Black and Brown trauma, the intersecting nature of oppression in the U.S., and the urgency of placing power and resources in the people’s hands.”

A Kaepernick ice cream had been on Ben & Jerry's to-do list for some time, according to Greenwood. But the idea gained momentum — and publicity — in 2018, when Curtiss Reed Jr., executive director of the Brattleboro-based Vermont Partnership for Fairness and Diversity, started a petition urging the company to honor Kaepernick with his own flavor. Reed even suggested that it be non-dairy.

During an interview Wednesday, Greenwood said the company was preparing to overnight two pints of Change the Whirled — one to Kaepernick and one as a surprise for Reed. Once the pandemic ends, Greenwood said, Ben & Jerry’s wants to host an ice cream party fundraiser for Reed’s organization, featuring its newest flavor.
Prev
Next