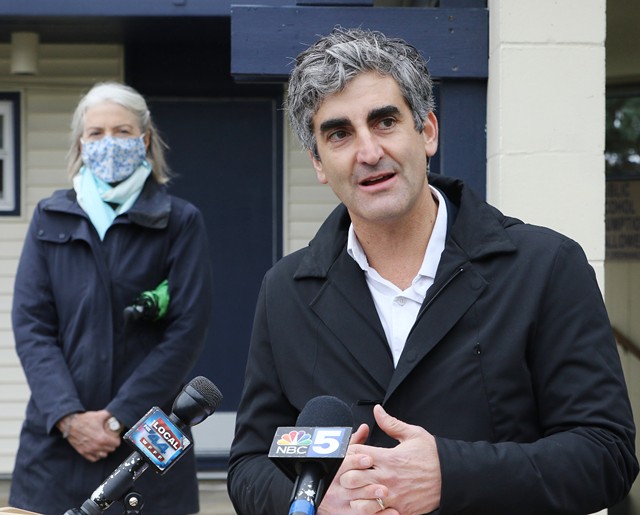 In a caucus stump speech on Sunday, Democratic Burlington Mayor Miro Weinberger railed against city Progressives for their "rigid" ideology, saying that he, in contrast, would continue to lead by using data and expertise if reelected in March.

Weinberger, who is running for a fourth term, was uncontested in seeking his party’s nomination at Sunday's caucus. According to party results, 425 Burlingtonians cast votes in the virtual affair, which allowed for email and in-person voting between 2 p.m. and 5:15 p.m.

Weinberger focused much of his speech on his accomplishments, including the city’s pandemic-era face mask distribution program; an administration goal to make Burlington a net-zero city by 2030; a plan for the Moran plant; and upgrades to the Burlington bike path. He also pledged to reform policing and combat systemic racism, two issues that have come to the forefront during his current term.

After a Tough Term, Can Mayor Weinberger Again Win Reelection?
By Courtney Lamdin
Politics
The mayor then took aim at the Progressives.

"As the Democratic Party has been establishing itself both locally and nationally as a party committed to helping people through policy and progress that are based in science, data and expertise, today's Burlington Progressive Party has been moving in a different, rigid, ideological direction," Weinberger said, adding that "small p or even Big P Progressives are alarmed by this clear, multi-year trend."

Weinberger warned that electing a Progressive could undo the city’s recovery from the Burlington Telecom debacle a decade ago. Weinberger's predecessor, former Prog mayor Bob Kiss, diverted city funds to the failing utility and tanked the city’s credit rating.

Since then, Weinberger noted, his team has firmed up the city's financial standing and built up reserves, which has allowed the city, to date, to avoid laying off workers during the coronavirus crisis.

“We know here in Burlington how dangerous devotion to ideology without attention to detail, data or expert opinion can be,” Weinberger said. “To repeat the mistakes of the past amidst the pandemic and deep recession would be disastrous.”

The party's Central District candidate was the embodiment of the Dems' message that the Progs have strayed too far left. Tiki Archambeau — a former Progressive Party chair — earned the Dems' endorsement to try and unseat incumbent Progressive Councilor Perri Freeman.

Archambeau said he’s “concerned about the direction of the current council,” where Progressives hold six of 12 seats. He chaired the Prog Party from 2003-05 and again from 2012-14. He's currently a member of Burlington's Public Works Commission and has previously served on the Wards 2/3 Neighborhood Planning Assembly steering committee.

“Pragmatism, coalition-building, compromise and courtesy are now dirty words,” Archambeau said. “Micromanagement is undermining the volunteerism put forth by the city's commissions. Open meeting laws are being actively flouted.”

In the night's only contested race, New North End resident Kienan Christianson won the Democrats' endorsement for the North District seat over Kerin Durfee, 162 to 97.

Durfee, a self-proclaimed "proud Democrat," had tried to contrast herself with Christianson, who also won the Progressive nomination last week. She was endorsed by outgoing Democratic Councilor Franklin Paulino.

“If you elect me as your city councilor, I'll put the voice of the people ahead of extreme ideologies,” Durfee said during her nominating speech.

Christianson works as an attorney at a Burlington law firm and serves on the city's Development Review Board. He ran an unsuccessful bid for council in 2019 as an independent with a Progressive endorsement. In an email to Seven Days on Sunday, he said that he'll run as a D/P in March.

"It's clear that many of my neighbors want to see more community input, engagement, and inclusiveness in city politics, and they want to see Democrats and Progressives working together," Christianson wrote.

Christianson will face independent candidate Mark Barlow, a small business owner and member of the city's Parks & Recreation Commission. If elected, Christianson said he would work to support New North End businesses and to find a solution for in-person learning at Burlington High School, which has been closed since September due to air quality concerns.

"I want to listen clearly to all of you, engage each and every one of you and make sure that your voice is heard on council," he said during the caucus.

Democrats did not run a candidate in the East District, meaning incumbent Progressive Councilor Jack Hanson will run unopposed unless an independent candidate files by the January 25 deadline.

"We have shown through over 30 years of Progressive leadership that we will lead in a way that brings all stakeholders into the process for an effective government that all people feel included in," Wronski said.
Prev
Next