Tracy earned approximately 787 votes, or about 55 percent, compared to 631 votes — about 45 percent — for fellow Councilor Brian Pine (Ward 3), according to party caucus results released Thursday. A record-breaking 1,420 people cast ballots online and in person as this year's event went virtual amid the coronavirus pandemic.

"I'm absolutely ecstatic. This is such a big win and such a big win for our party," Tracy said after the results were released. "I am so impressed with the turnout and the excitement that we have going into the general election."

Tracy, 33, was first elected to city council in 2012, the same year sitting Mayor Miro Weinberger took City Hall. The outspoken, hard-line Prog has branded himself as Weinberger's political opposite and vowed to bring “dramatic, structural and transformational changes" to Burlington if elected.

Tracy will face off against Weinberger, a three-term Democrat who is expected to win his party's nomination at its caucus on Sunday. At least two independents are also running, including Councilor Ali Dieng (Ward 7) and South End resident Patrick White. Others could join the race before the January 25 filing deadline.

Reached Thursday night, Pine said he was disappointed in the results but was thankful for his hard-working team, his family and those who supported his campaign. He said he felt "an outpouring of community support from all across the city." Pine said the loss has ended his bid for mayor, meaning he won't run as an independent.

"We brought people into the political process who have never been included, and I felt really proud to be part of a political movement that did that," he said. "I hope we can keep doing that." 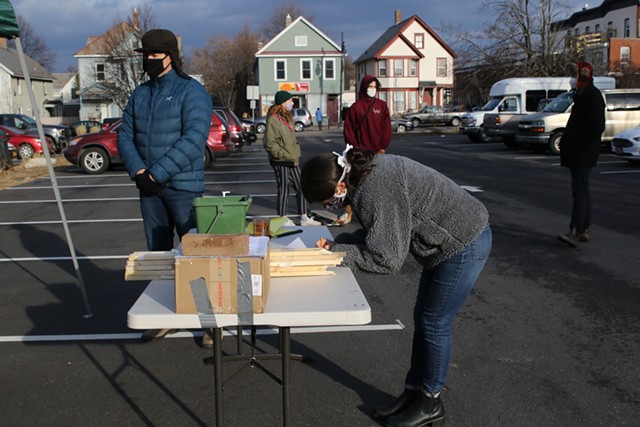 Tracy said he's excited for the general election and to take on Weinberger.

"I'm really looking forward to being able to engage in the conversations to come," Tracy said, "around where our city is headed and our different visions, and draw a strong contrast to Miro."

In a tweet after the results were announced, Weinberger congratulated Tracy and said he looks "forward to a substantive + spirited debate about the future" of the city. The mayor said "voters will have a distinct choice" when they cast ballots on Town Meeting Day.

"The Caucus results from tonight are further evidence the Burlington Progressive Party is increasingly becoming a party of dogmatic ideologues, rejecting the pragmatism that once defined it," wrote Adam Roof, the committee chair and a former council colleague of Tracy's. "This direction is dangerous in normal times, and even more so in the middle of a pandemic.”

Kienan Christianson won the Prog endorsement in the North District and said he will also seek the Democratic nomination. Kerin Durfee is also seeking Dem backing, and Mark Barlow is running in the district as an independent.

Progressive incumbents Perri Freeman and Jack Hanson won nominations for the Central and East districts, respectively. The Democrats have not yet announced any candidates for those seats.
Prev
Next