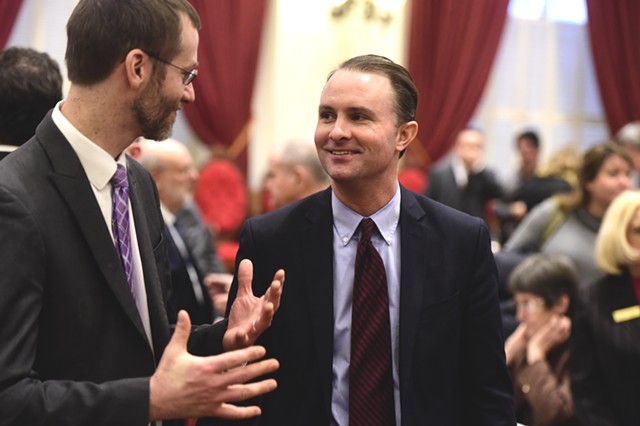 Vermont Attorney General T.J. Donovan says he would defend the constitutionality of a key piece of climate legislation if the governor makes good on his threat to sue to block the law.

Donovan said the Global Warming Solutions Act that was passed this year over a veto by Gov. Phil Scott is constitutional, despite Scott's claim to the contrary.

The escalation in the war of words over the controversial law could lead to a rare court standoff between the Republican governor and the Democratic attorney general.

“The Global Warming Solutions Act is constitutional and good policy,” Donovan said in a press release. “Vermont should be a leader in addressing global warming and should do what we can to meet our climate goals. There is nothing wrong with holding government accountable to the will of its people.”

Scott argued in his veto message and through administration officials that the legislature overstepped its authority by handing responsibility for crafting the state’s climate plan over to a 23-member Vermont Climate Council.

The panel held its first meeting last month, and its chair, Administration Secretary Susanne Young, reiterated her boss’s concerns. “If we cannot work out our differences and our concerns with the legislature, we may have no choice except to ask for clarity from the judicial branch,” Young said.

But in a letter to Jaye Johnson, Scott’s general counsel, Deputy Attorney General Joshua Diamond said claims of illegality “are without merit.”

Scott has argued that the legislature improperly delegated its authority to the climate panel. A court would likely find the law contains “sufficient policy standard and guidance to pass constitutional muster,” Diamond wrote.

Diamond takes an equally dim view of the Scott’s claim that the Climate Council encroaches on his executive powers. While 15 members of the council are appointed by the legislature, Diamond notes that it will be up to Scott's Agency of Natural Resources to implement the greenhouse gas emission reductions called for in the plan.


The law redefines Vermont's emission goals as mandates, requiring the state to make good on its various climate pledges. The state now must find a way to reduce carbon pollution to 26 percent below 2005 levels by 2025 and to hit more stringent benchmarks by 2030 and 2050. If it gets off track, as it is now, a judge could compel more aggressive action and regulations.


“Please know that if the Scott Administration decides to mount a constitutional challenge, the AGO will aggressively and dutifully defend [the law] and Vermont’s historic effort to combat global warming,” Diamond wrote.
Prev
Next