As Virus Surges, Vermont Breaks Out Its Rapid-Test Stockpile | Off Message 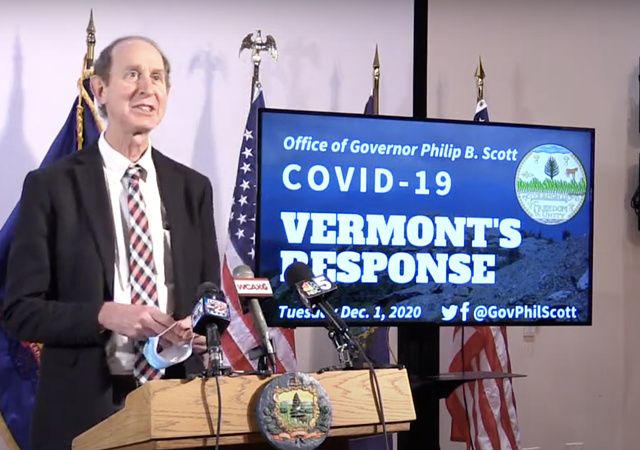 State health officials have said for months that rapid-result antigen tests for COVID-19 are not as accurate as the PCR tests that must be processed in a lab. In settings with a low prevalence of the virus, the state has cautioned, the rapid tests can provide false results.

That’s no longer the case in Vermont’s long-term-care facilities. As the virus surges in those settings, state officials are incorporating rapid tests into their monitoring strategy. The state will begin delivering Abbott BinaxNOW rapid tests to long-term-care homes, Human Services Secretary Mike Smith said at a press conference on Tuesday.

The federal government, which is providing Vermont with 180,000 of these tests, began delivering batches to the state in early October. State officials had yet to distribute any of them.

In the past week, though, two new outbreaks have been confirmed at long-term-care facilities: 25 cases at Elderwood at Burlington and 14 at St. Albans Healthcare & Rehabilitation Center. Since November 23, testing at six facilities with previously known outbreaks identified 27 additional infections.

Health Commissioner Mark Levine explained the policy change. When faced with an outbreak in a facility, he said, “You want to be able to make rapid decisions regarding triage of patients and staff … so that infections don’t spread.”

In fact, many of Vermont’s nursing homes have already been using these tests, having previously received a different kind of rapid testing equipment directly from the federal government. Despite the state health department’s advice as recently as October to use PCR testing whenever possible, 21 nursing homes in the state had collectively run more than 1,100 rapid tests as of November 15, according to reports the homes must submit each week.

Another development in the state’s approach to these tests: While health care providers have been required to report all positive rapid-test results to the health department, the state has not shared those numbers publicly to date. Only “confirmed cases” — detected with PCR laboratory tests — have been counted in the state’s statistics.

That will change starting on Wednesday, December 2, when Vermont will begin reporting presumptive cases in addition to confirmed ones, said Levine. Those cases will include people who got positive rapid-test results, as well as patients who were exposed to COVID-19 and have symptoms.

Smith said Wednesday’s data update will include 120 presumptive positives detected since September 6. The change in reporting will increase transparency, he said, and will bring Vermont’s reporting procedures in line with those in other states.

The recent spike in long-term care facilities follows several record-breaking weeks of case counts in the general public. But Financial Regulation Commissioner Mike Pieciak noted Tuesday that there’s been a bright spot: Vermont’s case growth rate has started to fall. And though it’s too early to know whether Thanksgiving travel will contribute to rising case counts, mobility data show that Vermonters spent more time at home and significantly decreased travel to workplaces. At Tuesday’s press conference, Secretary Smith also addressed an incident where a batch of more than 200 swabs express-shipped from a testing site in Barre to the Broad Institute in Cambridge sat in a UPS warehouse for 50 hours before being delivered, at which point they were too old to be tested.

The state informed those affected on Monday that they would need to get another test. However, as the Barre Montpelier Times Argus reported, the state did not blind-copy the recipients, meaning the email addresses were visible to everyone who received the email.

“We will be reviewing all of our notification processes to make sure that in the future we avoid sending out letters with information that would identify an individual,” said Smith.

He cast it as a rare incident.

And Gov. Scott urged those who didn’t receive their results to get tested again. He said the state will do everything within its power to return results for those whose tests were in that batch within 24 hours “even if I have to drive the samples myself from Barre to the health lab in Colchester.”
Prev
Next