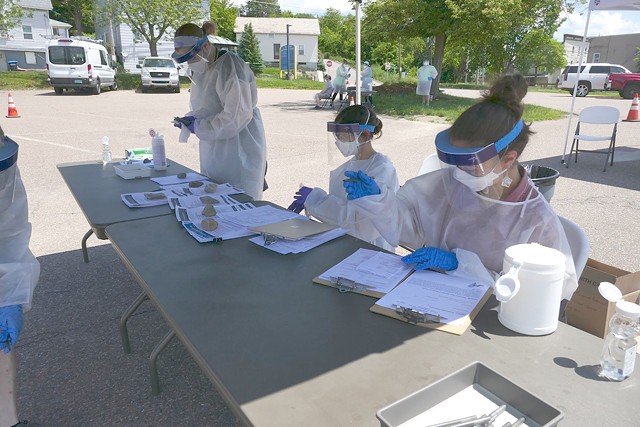 Vermont set another record for new coronavirus infections on Thursday, the latest surge of cases in a second wave of the pandemic that's hitting just as cold weather forces more people indoors.

The 109 new cases reported Thursday marks the first time that Vermont has hit triple digits in a single day since the pandemic began. The previous single-day record of 76 was set just a day prior. (The Vermont Department Health initially reported 72 new cases Wednesday but later added four more to that tally.)

Vermont's seven-day average is now 50, the highest it has ever been. Nineteen people are currently hospitalized, the most since April. Five are in intensive care units. Another three are hospitalized with suspected cases.

A county-by-county breakdown shows the virus spreading throughout the state. Washington County — the site of an outbreak that began last month among recreational hockey and broomball leagues — had 46 new cases Thursday, while Chittenden County recorded 16. At least one new case was reported in all 14 Vermont counties.

Officials say many of the new cases have been linked to out-of-state travel or private social gatherings where people haven't worn masks or kept a social distance. They are encouraging anyone who has traveled out of state, had a visitor from outside Vermont or attended any gathering with people outside of their normal social circles to get tested.


The Vermont Department of Health has also begun issuing targeted pleas. In a Thursday afternoon press release, the department said contact tracers have been unable to find everyone who attended three recent events in northern and central Vermont.

Anyone who attended October 31 Halloween parties in Marshfield and Milton should get tested, officials said. So should people who participated in bowling leagues at Spare Time in Colchester on November 3 and 4.

"When the contact tracing team is not getting the information it needs, then people who may have been exposed to the virus and don’t know it might be unintentionally transmitting it to others," Health Commissioner Mark Levine said in the release. "That’s how an outbreak starts."

He urged anyone who receives a call from the health department to provide the information requested. “We need everyone’s help to do our job," he said.

Vermont's alarming trends come as the pandemic is surging to record levels across the country. On Wednesday, the U.S. set a record for new cases — 142,000 — as well as hospitalizations, with more than 65,000.
The New York Times reported this week that more than a third of U.S. governors have now issued public appeals to take coronavirus prevention measures more seriously.

That includes Gov. Phil Scott, who has repeatedly urged Vermonters to recommit themselves to best health practices so they can bend the pandemic's curve as they did in the spring. "As I have said throughout this pandemic, we all have to do our part to keep each other safe," Scott said in a press release Wednesday.

Earlier this week, Scott reinstated mandatory quarantine requirements for out-of-state arrivals. And he joined six other Northeast governors on Thursday in suspending interstate hockey competitions for public and private schools, as well as youth leagues, in response to outbreaks associated with the sport.

The suspension — which was jointly announced by Vermont, Maine, New Hampshire, Rhode Island, Massachusetts, Connecticut and New Jersey — will begin Saturday and last at least through the end of the year. It does not extend to collegiate, professional, or U.S. national team hockey activities.

"As public health data continues to evolve, the states will reassess the need for continued restrictions on interstate sports activities," the governors wrote in a press release.
Prev
Next