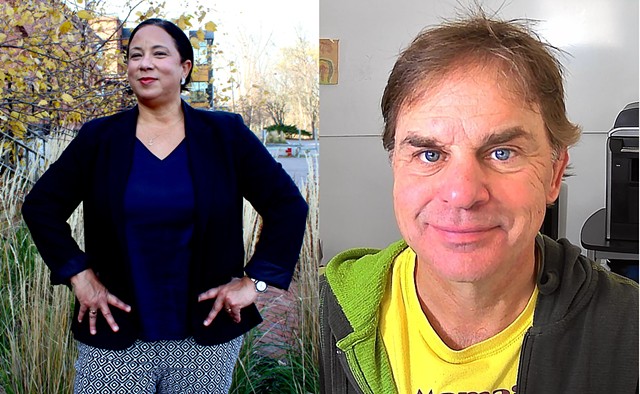 Kerin Durfee will seek the Democratic nomination, while Mark Barlow is running as an independent. Kienan Christianson, who lost the North District race to Paulino in 2018, said he's "strongly considering" another run. He said he'll formally announce his decision in the coming weeks.

Spots in all four city council district seats, which represent two wards apiece, are up for election in March. Paulino, a Democrat and one-term councilor, announced on Twitter in September that he would not seek reelection.

Paulino said he wants to spend more time with his three young children, who are learning from home during the coronavirus pandemic. He has already endorsed Durfee, a first-time council candidate.

"[She has] just such a compelling story," Paulino said, citing Durfee's work and life experiences. "That's part of the reason I dropped out. It weighed on me that someone like that was waiting to run."

Durfee, 52, works for the ECHO, Leahy Center for Lake Champlain as the organization's director of earned revenues and guest services. Before that, she worked at City Market, Onion River Coop for 12 years. She's a member of the national NAACP and is participating in a training program with Emerge Vermont, an organization that recruits Democratic women to run for political office. Durfee was appointed to the city's Police Commission in June.

Durfee describes herself as "a neighbor" and "regular person" who can represent residents' concerns.

"I'm not really a politician," she said. "It's not really about the race. It's not about that for me. It's about who can get to the table and govern, and I think that's me."

If elected, Durfee wants to focus on affordable housing and how Burlington can help both residents and businesses recover from the economic effects of COVID-19. As a woman of color, Durfee said she wants to engage the city's New American population and be an example "for people who've never really stepped into the arena of local politics."

"By just ... exercising my voice and bringing issues that we care about to the table, I hope to inspire other people to do exactly the same across the city," she said.

Known as the most conservative part of Burlington, the New North End has become more diverse in recent years as younger families and foreign-born residents have moved in. Left-leaning politicos have successfully staked a claim in the district, including Ali Dieng, the Ward 7 councilor who in 2017 became the first candidate with a Progressive endorsement to win a council race there in recent memory. Dieng now identifies as independent.

Northern Front: Progs See an Opening in Burlington's Most Conservative District
By Katie Jickling
Politics
While Durfee is running as a Democrat, she said she'd work with Progressive councilors — and already does as a member of the city's Public Safety & Police Joint Committee, which is tasked with assessing police department operations and evaluating alternatives for public safety.

"We do differ politically, absolutely, but I think with a moderate voice at the table, I would be really good in the mix of councilors who are serving right now," Durfee said.

Barlow said the council's current partisan divide — six Progs, five Dems and one independent — creates "obstacles to dialogue and compromise." He said he would not seek a party nomination. "It's probably easier to work on community problems without all the extra baggage and entanglement that comes with party affiliation," he said.

Barlow, 58, grew up in the New North End and has lived in the neighborhood for 21 years as an adult. He owns a small business that offers online marketing services to mortgage brokers, insurance agents and solar panel installers. Barlow also sits on the city's Parks & Recreation Commission and most recently served two terms as a Burlington school commissioner from 2015 to 2019.

Barlow criticized some recent council decisions as being rushed and driven by special interest groups. He pointed to the council's June resolution to reduce the police force from 105 sworn officers to 74 through attrition as especially problematic. Barlow said he "wholeheartedly" supports racial justice but thinks the council should have first considered what organizations, if not the police, will respond to certain emergencies.

Burlington City Council Votes to Cut Police Force Through Attrition
By Courtney Lamdin
Off Message
"It just seemed like a political decision and not what you'd expect from a body whose job it is to make sure the city functions efficiently and properly," Barlow said. He also questions whether proposals to ban no-cause evictions and reinstate ranked-choice voting were properly vetted.

"More than anything, I think we need a high functioning, collaborative and solution-seeking city council," Barlow said. "I just think we need to get the divisiveness and the partisanship out of the way."

Barlow already has support from Friends of Barlow, a group of supporters made up of former city councilors Dave Hartnett, Jane Knodell and Kurt Wright. Hartnett thinks Barlow will be successful because he eschews party labels.

"He'll go down there and make decisions based on what's best for Burlington," Hartnett said.

Christianson, the potential candidate, works as an attorney at a Burlington firm and serves on the city's Development Review Board. In 2018, he ran for council as an independent with a Progressive endorsement.

Few neighbors care about party affiliation, Christianson said; most want to elect a councilor who listens to their concerns.

"People want to know that their city councilor's got their back," Christianson said. "I think it's more important that that person really be able to work for the entire community. That's what my focus has been the last two years."

Correction, November 10, 2020: A previous version of this story incorrectly identified the Friends of Barlow group as a PAC.
Prev
Next