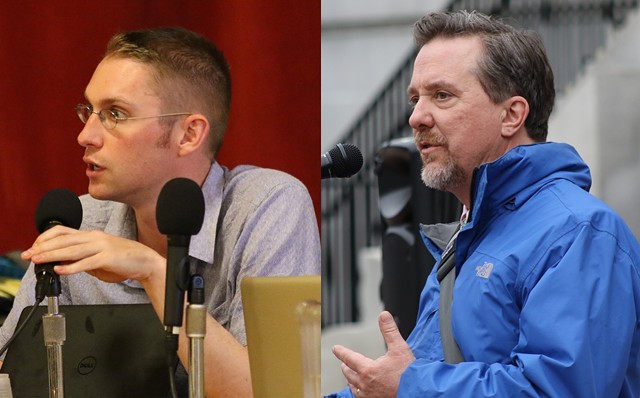 
Mayor Miro Weinberger, a three-term Democrat, announced Tuesday morning that he is running for reelection. Hours later, independent City Councilor Ali Dieng (Ward 7) confirmed he is “considering” a mayoral bid, signaling what could become a crowded race for City Hall.

The Progressive Party announced Pine and Tracy’s bid in a press release about a series of upcoming candidate forums, the first of which is Wednesday.

"We want to give Burlington voters a chance to really get familiar with the choices that they have on the Progressive side," Wronski said. "We also want to give the candidates an opportunity to really present their vision."


Wronski’s press release came out just as Tracy, the council president, called Monday night’s council meeting to order, leaving him and Pine unavailable for comment. Tracy confirmed his candidacy on Tuesday morning; Pine said Tuesday afternoon that he was unavailable for an interview.

"There might be other people who jump in the race," Wronski said. "That's one of the reasons we wanted to announce so early and announce these forums so early — to give people who may still get in a chance to get in."

The forums come weeks before the party's December 1 nominating caucus, which will be conducted virtually. The first forum, on environmental issues, is on November 11 at 5:30 p.m. Other events include forums on racial and social justice on November 16 and economic justice on November 19. The party will stream all three on its Facebook page.

The Democrats are scheduled to caucus on December 6, also virtually.

Pine has been involved in Burlington politics for nearly 30 years, having first served on the city council from 1991 to 1995. He then worked at the city's Community and Economic Development Office from 1996 until 2015 and ran again for city council in 2018. He was reelected to his seat in March.

Tracy graduated from the University of Vermont in 2009 and was first elected to the city council in 2012, the same year Weinberger won the mayorship. He became the city council president earlier this year.

Progressives currently hold a majority on the 12-member council.


Tracy told Seven Days that rooting out systemic racism and addressing climate change "in a much more rapid and furious way" will be hallmarks of his campaign. Tracy said his leadership style would be grassroots and "bottom up" compared to what he called Weinberger's "top down" management of city business.

“I’m really excited for this race,” Tracy continued. “I’ve been involved with city government for the last eight years, and I’m excited to take the next step and hopefully become the next mayor of Burlington.”

No other Democratic challengers have emerged for the top post at City Hall, nor have any Republicans. Patrick White, a 29-year-old South End resident, told Seven Days last week he intends to run as an independent and will not seek either party's nomination.
Prev
Next