Republicans Tagged House Speaker Johnson as Out of Touch | Off Message

Republicans Tagged House Speaker Johnson as Out of Touch 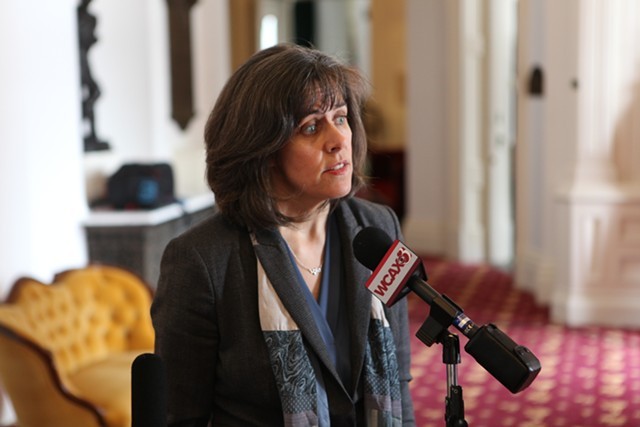 When word came late Tuesday that House Speaker Mitzi Johnson (D- South Hero) appeared to have lost her seat by just 18 votes, it was an election night shocker for many. The 18-year incumbent had won reelection by narrow but increasing margins in recent years, and many assumed that this year’s historic boost in turnout would only help Johnson.

But Matt Dickinson, a professor of political science at Middlebury College, heard that Johnson was in trouble shortly before the election. Her loss, he said, was not as surprising as it may appear.

"The sense he got was this guy had been spending two years working the district, and she had lost touch and was vulnerable and didn’t realize it,” Dickinson said.

But in 2018, her Democratic running mate, Ben Joseph, lost to Michael Morgan’s uncle, Leland Morgan (R- Milton), who won the district's other seat, a clear sign of trouble on the home front for Johnson.

Over the summer, Republican leaders noticed that while Johnson was tied up leading an extended legislative session, the Morgans were campaigning very effectively. They did so together, and not only on their home turf of Milton, but in  conservative areas of Grand Isle County such as Alburgh, said Sen. Corey Parent (R-Franklin).

His district includes the isolated community of 2,000 people on a peninsula in the middle of Lake Champlain, close to Canada. The Morgans were spending a lot of time there, Parent said.

“The people I know in Alburgh may not have voted for them last time, but this year they were like, 'You know what? They’re putting in the work. They’re coming up and talking to us,’” Parent said.

The men even joined the local American Legion, a social hub in the rural community.

"We've been literally campaigning for the last two years, building upon the relationships that we already had in the district, and made them greater," Michael Morgan told Seven Days.

“We saw the ripple in the water and tried to push it over the edge,” Parent said.

On Wednesday, Johnson announced plans to file for a recount Thursday morning. Yet she also accepted that she may not prevail. When she stood out on Route 2 near Sandbar State Park Wednesday to thank motorists for voting, her sign read: “Thanks for the 18 years.”

“If more people participated, and that larger group decided that I was not the person to represent them, then I have to respect and honor that,” she said.

Voter turnout increased in each of the four towns in her district this election, but conservative stronghold Alburgh's spike — 50 percent — was the greatest. Leland Morgan won 602 votes in Alburgh; Michael Morgan, 557; and Johnson, 392.

She cited a number of factors that may have contributed to the lopsided results in that area. She presided over a legislative session that lasted into September, making it harder to address local concerns about climate regulations, property taxes and clean-water funding.

She was also reluctant to knock on doors during the pandemic, she said.

Her opponents capitalized on that. They sowed fear of a “carbon tax” among residents who, because of long commutes and older homes with high heating costs, were receptive to that message.

“The Republicans up here love to bash me on the carbon tax — which I have never passed!” Johnson said.

Johnson was “whipsawed” between the need to lead her caucus and the need to represent her constituents, Dickinson said, noting her strong support of climate legislation. Lawmakers passed the Global Warming Solutions Act to require the state to meet its carbon reduction goals. Then Johnson presided over the override of Gov. Phil Scott's veto of the bill, he noted, thwarting the popular executive.

“I think she focused on that role as speaker and leader of the party — including a very progressive wing — and she lost sight of what her constituents wanted,” he said.

Johnson said she'd been right to focus on wrapping up the complex and consequential legislative session.

"My attention was exactly where it needed to be, which was governing, which was doing the job I was hired for, not skipping out on it and asking if I could have it again," she said.

What happens next is up in the air. Johnson plans to petition the Superior Court in North Hero to order a recount, and should get it, given the slim margin. She doubts that the process, overseen by the district clerk, would take “more than an afternoon” but isn’t sure when it will take place.

In the interim, she plans to tell her House caucus that if she wins the recount, she’ll run again for speaker, and if she doesn’t, they should start thinking about who should replace her.

One possible candidate is Rep. Sarah Copeland Hanzas (D-Bradford), who ran for speaker in 2016 but lost to Johnson. Another is House Majority Leader Jill Krowinski (D-Burlington). She declined to discuss her interest in the post Wednesday.

“We need to get through the speaker's race before we start talking about who would be running,” Krowinski said. “Right now we’re all fully backing and supporting the speaker as she gets through the recount.”