Senator Crashes on Icy Road on Her Way to Polling Place 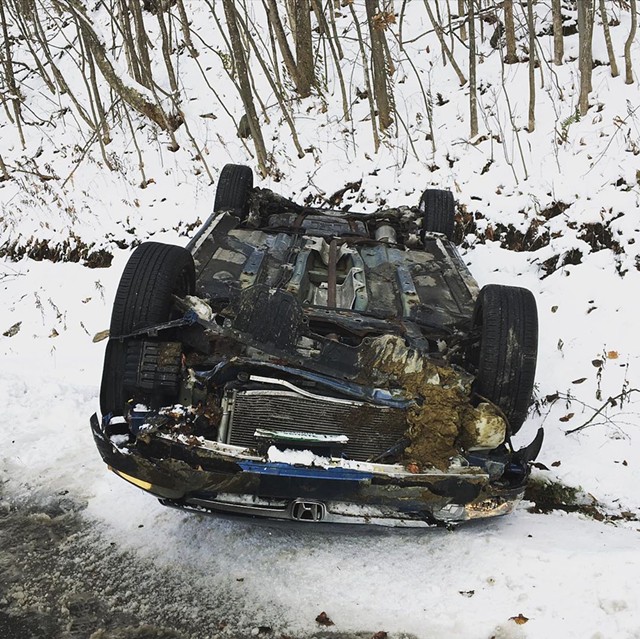 COVID-19 wasn't the only potential hazard Vermonters faced on Election Day.  State Sen. Ruth Hardy (D-Addison) crashed her car on an icy country road  on her way to campaign at a polling place.

The senator said she was driving alone from Huntington to Starksboro around 11 a.m. when she lost control of her Honda Civic on a downhill section of Hinesburg Hollow Road. The car slid into a ditch and flipped onto its roof.

Central Vermont received several inches of snow overnight in its first significant snowfall of the season, and Hardy hadn’t yet get gotten her snow tires put on.

“Now my car is totaled, so I won’t need snow tires on it,” Hardy said from her home in East Middlebury, where she was recuperating Tuesday evening.

The first-term senator said she was shaken by the experience but otherwise fine.

“My shoulders and neck and body are sore, and I have a headache,” Hardy told Seven Days. “But I took a nap and that helped.”

Hardy said when the car landed on its hood, she was suspended upside down by her seatbelt, which hurt. The worst injury she received was when she undid the seatbelt and fell on her head.

She was initially confused and “a little freaked out” because the front doors were pinned shut, preventing her from getting out. She found her cellphone in a car interior strewn with campaign signs and managed to call 911.

A passerby helped her get out through a rear door and stayed with her until Hinesburg police and EMS arrived, she said.

After paramedics checked her out, her husband picked her up at the police station and took her home, where she posted about the experience on social media. One of her daughters set about making her a cake, she said.

“We better be celebrating," she remarked. "After this I deserve a new president!”
Prev
Next