by Paul Heintz and Derek Brouwer 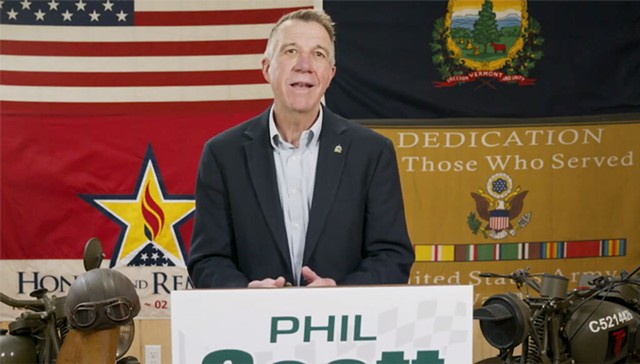 Editor's note: As of midnight on Election Day, this story is no longer being updated. For the latest Vermont results, click here.

Republican Gov. Phil Scott has won a third term as governor of Vermont, according to the Associated Press.

With 246 of 275 precincts reporting as of 11:59 p.m., Scott was leading his Progressive/Democratic challenger, Lt. Gov. David Zuckerman, 67 to 27 percent, according to the Secretary of State’s Office.

“Vermonters have spoken and I’m humbled to earn your support once again,” Scott said in a video address taped in his motorcycle garage. “Your faith and trust in me is the greatest honor of my life and I will continue to work every single day to make the lives of Vermonters better, our economy stronger and our state more affordable for families and businesses.”

During an online event hosted by the Vermont Democratic Party on Tuesday evening, Zuckerman conceded that he had lost the race and said he had congratulated Scott moments earlier. Zuckerman said he had told the governor he was “ready to stand by him for our democracy, for the decency that we represent in Vermont.”

Scott, a 62-year-old former construction executive from Berlin, was seeking to lead the state for a third two-year term. A moderate Republican, he has consistently distanced himself from President Donald Trump and said Tuesday afternoon that he had voted for Democratic nominee Joe Biden. Scott staked his reelection campaign on his administration’s handling of the coronavirus pandemic, arguing that Vermont needs “a steady hand on the wheel” of state government.

Zuckerman, a two-term lieutenant governor and former state legislator, sought to focus the race on the major policy differences between the candidates, saying he would bring to the governor’s office “vision, not vetoes.” A 49-year-old organic farmer from Hinesburg, he highlighted his support for a more robust social safety net, a higher minimum wage and a more aggressive response to climate change.
Though the two candidates are well known to voters and hold dramatically different views on the role of state government, the race never truly caught fire. Scott declined to engage in most traditional campaign activities, but he made good use of his twice-weekly press conferences — broadcast live on radio and television — to burnish his reputation as an effective leader in a time of crisis. Zuckerman rarely criticized Scott’s response to the pandemic, and he struggled to shift the conversation to more comfortable terrain.

Speaking to reporters outside the Berlin town offices on Tuesday, Scott said his latest race “wasn’t a usual campaign.”

Scott reiterated the point in his victory speech Tuesday night, saying that the state was facing “some of the greatest challenges of our lifetime.” He thanked Vermonters for taking the pandemic seriously and warned them not to let their guard down.

“And as we enter the winter months, we must remain vigilant,” he said. “If we do, I’m confident we’ll continue to lead the nation and more importantly, keep our loved ones safe, our kids in school and emerge from this pandemic faster and stronger than any other state.”

Speaking during the Vermont Democratic Party forum, state Auditor Doug Hoffer, a close ally of Zuckerman’s, conceded that his friend was likely to lose. "I'm disappointed that it appears like David Zuckerman is not going to win,” Hoffer said. "I know he will find a way to remain engaged and work in the public interest."

Scott also warned of another threat during his victory speech. “Our nation is hurting — not just from COVID-19, but because of another virus that has infected the hearts and minds of too many Americans: that of hate, fear and division,” he said. “We must confront this with the same force and energy we’re putting toward the coronavirus.”

Vermont Democratic Party chair Terje Anderson said of Zuckerman, "He had the misfortune of running against Gov. Scott when Scott was able to have the halo of COVID-19 around him."

Ever since Zuckerman announced in January that he would not seek reelection as lieutenant governor, the contest to fill that open seat appeared the most competitive in Vermont. According to preliminary results Tuesday evening, Democratic assistant attorney general Molly Gray was leading Republican travel executive Scott Milne 50 to 43 percent.

At the Democratic Party event, Donovan pledged to provide “competent, common-sense and compassionate leadership” during his third term as attorney general. He vowed to continue fighting Republican President Donald Trump, if necessary. "These last four years, when the federal government has stepped back, we've stepped up," Donovan said.


In one of the first House race results of the night, Winooski residents elected the state’s first openly transgender lawmaker to represent them in Montpelier. Democrat Taylor Small, director of health and wellness at the Pride Center of Vermont, received 2,212 votes, according to the City of Winooski’s website. That was enough to secure her one of two seats in the district. Incumbent Rep. Hal Colston (D-Winooski) was the top-vote getter, with 2,320 votes. Both far outpaced clean water advocate James Ehlers, who ran as an independent. He received just 802 votes. Annise Parker, president and CEO of the LGBTQ Victory Fund, released a statement about Small’s victory soon after results were released. The organization works to elect LGBTQ lawmakers across the country. “The impact of Taylor’s groundbreaking victory cannot be overstated,” Parker wrote. “There are so few transgender people in elected office that nearly every win is a historic one, yet with each barrier broken comes more trans people inspired to do the same.”

Black received 1,455 votes to Bancroft’s 1,141, according to the Associated Press.

Black and her husband Rob argued passionately at the Statehouse last year that a waiting period for gun purchases would have saved her son’s life, but the legislation was vetoed by Gov. Phil Scott in January.

Bancroft, meanwhile, is a staunch supporter of gun rights. He also vocally opposed a Vermont bill that enshrined reproductive rights into state law. Black said she was motivated to take on Bancroft by his position on abortion as much as his position on guns.
In Stowe, incumbent Republican Rep. Heid Scheuermann held onto her seat, knocking off Democratic challenger Jo Sabel Courtney. Scheuermann earned 1,925 votes to Sabel Courtney's 1,404, according to Democratic party officials.

The result dashes Democratic hopes of picking off a Republican in an increasingly blue district. The race had been considered highly competitive, especially given that Scheuermann, who was first elected in 2008, won by just 87 votes in 2018.


Rep. Cynthia Browning (D-Arlington) took an unconventional approach to her reelection bid: She renounced her party and ran as an independent in the two-seat Bennington-4 district.

Incumbent Rep. Kathleen James (D-Manchester) held onto her seat with 2,797 votes, while Seth Bongartz, a Democrat who served two terms as a legislator in the early 1980s, came in second with 2,651 votes, according to results reported by the Associated Press. Browning earned just 2,111 votes.

Browning earned the wrath of party leadership after she forced her House colleagues — amid the coronavirus pandemic — to return to vote in person in Montpelier last March, arguing the rules required it.

This story will be updated.
Prev
Next