Vermont Gov. Phil Scott told reporters Tuesday afternoon that he cast his presidential ballot for Democratic nominee Joe Biden. That makes him the only incumbent Republican governor in the country to publicly disclose his support for the former vice president.

The governor has made clear for months that he would not vote for Republican President Donald Trump, but he has been coy about whom he would support. 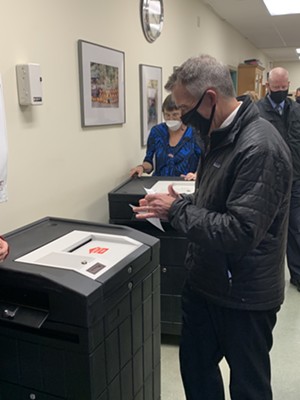 “It’s been a bit of a struggle for me, but I ended up voting for Joe Biden,” he told reporters outside his local town office in Berlin, after depositing his ballot in an optical scanner. According to Scott, he had never before backed a Democrat for president. “So I had to do some soul-searching,” he said.

“President Trump has had four years to unite this country and has failed to do so,” Scott said. “We need someone who can pull us together. Our country needs to heal, and I’m very concerned about what another four years will do to our country. We’re so polarized here. We’re so divided, and it’s become so tribal. We need leaders. We need role models that will step up and pull us together as one country, and I’m afraid that President Trump misses the mark.”

Scott said he disagrees with many of Biden’s policy proposals but believes the vice president has what it takes to bridge the nation’s partisan divide. “I think he can heal the country,” the governor said. “I think he can bring us together.”

Scott also made clear that he expected Biden to remember voters like him if he makes it to the White House.

Scott himself is up for reelection on Tuesday. He's facing Lt. Gov. David Zuckerman, a Progressive/Democrat.

“Oh, I should mention: I voted for Phil Scott for governor, as well,” Scott told the gaggle of reporters eagerly awaiting his presidential decision outside the town offices. “I know you were all waiting for me to announce that, as well.”

Though several other prominent incumbent Republicans have said they would not back Trump — Sen. Mitt Romney (R-Utah), Maryland Gov. Larry Hogan and Massachusetts Gov. Charlie Baker among them — none have endorsed Biden. Romney has kept his vote private. Hogan said he wrote in the late president Ronald Reagan. Baker said Tuesday, "I blanked it," according to WBUR.

In Vermont, Republican lieutenant gubernatorial candidate Scott Milne said he wrote in former governor Jim Douglas for president — as he and Scott said they did in 2016.

Scott said Tuesday that it might have been easier if he had written in a non-candidate’s name this time around, too. But, he said, “I came to the conclusion that it wasn’t enough for me to just not vote. I had to vote against [Trump].”
Prev
Next