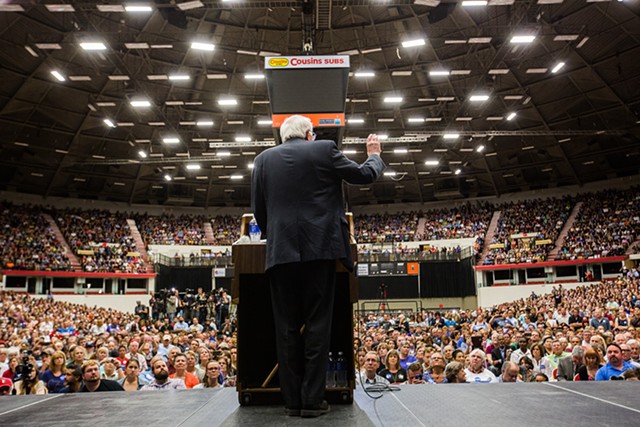 A report that Sen. Bernie Sanders (I-Vt.) is seeking a position in a potential Joe Biden administration has raised questions about who would succeed Sanders in the Senate.

Citing unnamed sources close to Sanders, Politico reported Thursday that the Vermonter is interested in serving as Biden's labor secretary should Biden win the presidential election next month. Neither Sanders nor the Biden campaign corroborated the report, and a Sanders spokesperson declined to comment Friday when queried by Seven Days.

But the possibility of a vacancy in Vermont's congressional delegation, which hasn't occurred since 2006, has renewed focus on the role Republican Gov. Phil Scott might play in filling it. State law dictates that the governor schedule a special election within six months of a vacancy and that the winner complete the former occupant's term. Sanders' current term ends in January 2025. The governor is also empowered to select an interim senator to fill the post until a special election is held.

Asked in February what he would do if Sanders stepped down from the Senate, Scott told Seven Days that he would appoint an independent who had no plans to run for the seat. But he would not say whether he would expect that independent to caucus with Senate Democrats or Republicans, which could decide control of a closely divided chamber.

"I think I would be looking for somebody that fits all the qualifications and is independent by nature, and I don't know [that] I would have a litmus test of any other sort," Scott said at the time.

But at an unrelated press conference on Friday, the governor changed his tune.

"I want this to be fair," he said, noting that he has filled past vacancies in the state legislature with appointees of the same party as outgoing members. "So in this case, again, Sen. Sanders has caucused with the Democrats. I would anticipate I would look at ... a more left-leaning type of independent that would obviously caucus with the Democrats."

Scott's comments would seem to bolster Sanders' chances of securing a job in a Biden administration. The Politico story noted that the senator faced "an uphill battle," in part because a Republican governor could choose his replacement.

He told Seven Days in February that he would seek to appoint someone who would run for the seat. He would also select a Democrat or an independent in the Sanders mold who would pledge to caucus with the Democrats. And, he said at the time, "All else being equal, I would tilt towards a woman over a man — but issues come first." A spokesperson for Zuckerman said Friday that his views had not changed.
Prev
Next