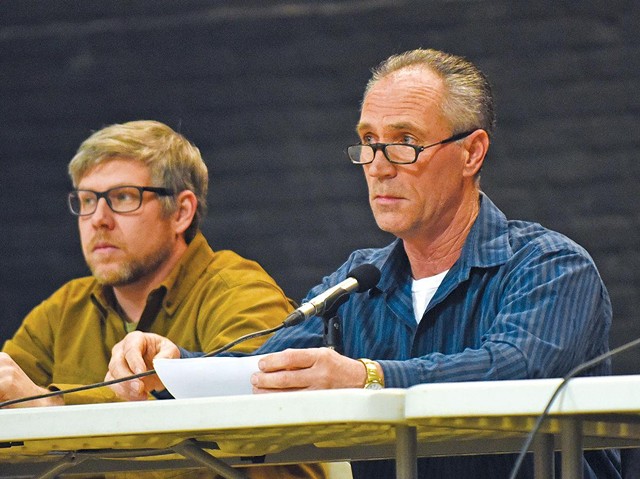 A Waterbury politician running for state office says he doesn't want to defund the police: He wants to segregate them.

Chris Viens, chair of the Waterbury Selectboard and an independent candidate for the House of Representatives, said during a local radio interview that he thinks having minority officers respond to incidents involving other minorities might help defuse racial tensions in the state.

“As far as the defunding of the police, I’d rather see segregated police,” Viens told WDEV radio during a candidate forum on Monday. “When calls come out that are minority related, those police officers that are ... minority will address those issues.”

Viens, an excavation contractor, said that, were his plan enacted, “if there is a tragic shooting” of a person of color by another person of color, “the whole racist issue might be put to rest.”

His remarks were immediately dismissed by incumbent Rep. Tom Stevens (D-Waterbury), who called them “some of the most culturally insensitive comments I have heard this year after a long conversation about racial justice in Vermont” and “no less revolting” than the “separate but equal” doctrine used for years to justify the nation’s painful legacy of racial segregation.

“There is a racist idea behind that that is part of the systemic racism that exists in this state and in this country,” Stevens said.

In an interview with Seven Days on Tuesday, Viens said his idea was not racist because he is advocating for diversifying the state’s overwhelmingly white police forces. Deploying minority officers to situations involving other minorities might help “remove the race card” from responses and “simplify things,” he asserted.

“If there was a civil dispute in a minority neighborhood, or something like that, wouldn’t you think they’d feel more comfortable if a minority police officer showed up as opposed to a white officer, which would automatically, instinctively throw up a red flag, throw up a defense of, ‘Here we got a honky cop?’” Viens said.

A Black police officer, by contrast, might be “more in tune with the disparities and the challenges that Black people have” and therefore “may be able to defuse the problem easier,” he said.

Viens wasn’t exactly sure how dispatchers would know the races of people involved in public safety incidents, but he said that if a person’s name was “Mohammed,” one could “pretty much guarantee that’s not a white person.” He said he assumed law enforcement agencies would be able to figure out how to identify the ethnicity of suspects or callers.

Viens, 60, has been on the Waterbury Selectboard for nine years. He is running for the two-seat House district that includes Waterbury, Huntington, Bolton and Buels Gore. In addition to Stevens, the two other candidates are incumbent Rep. Theresa Wood (D-Waterbury) and newcomer Republican Brock Coderre of Waterbury.

Vermont Public Safety Commissioner Michael Schirling said the idea Viens put forward was legally questionable. Further, it'd be difficult to implement because there are so few officers of color in the state, Schirling said. But more importantly, while diversity in law enforcement is desirable for many reasons, there is no evidence that racial diversity in ranks of police, prosecutors or the judiciary improves the “disparity in outcomes in criminal justice,” he said.

Viens called that “pure speculation” and said the only way to find out is to try it and see.

“I’m not intending any ill will here. I’m just trying to solve a problem,” he said.

He acknowledged his word choice might not be the best.

"Maybe 'segregate' is the wrong word," he said. “I’m not a professor of the English language. I'm a construction worker."

All he's trying to do is find a constructive path forward, he said, as opposed to Black Lives Matters protesters and their calls to defund the police, which he sees as “a step backwards.”

“I guess my thought was, rather than protest and tear down people’s buildings and burning hardworking people’s businesses and try to bully your way to a solution here, let’s try to think outside the box,” he said.