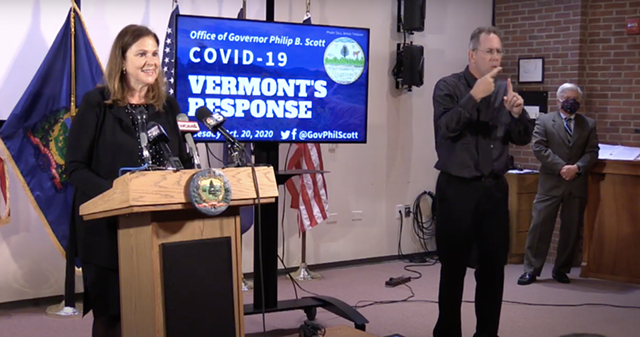 Vermont has launched a new program that will distribute $76 million in grants to businesses affected by the ongoing COVID-19 pandemic.

The cash is part of a second round of state business grants; a first round distributed $152 million starting in July. Vermont businesses also received more than $1.2 billion in loans through the federal Paycheck Protection Program; businesses can have those loans forgiven if they can prove that they used the funds to keep staffing at pre-pandemic levels.

The previous round of state grants had eligibility requirements that excluded some sole proprietors and newer businesses that did not have a full year of revenue in 2019. The state's program was also first-come, first-served, meaning businesses that applied late missed out on funding, even if they were eligible.

Goldstein said this round will be different.

“We took the lessons we learned from the first time around and worked to develop a program that would address the financial needs of those sectors that are still suffering greatly, and make it more possible for other entities that were closed out the first time around,” she said.


The application is now open for businesses that collect state sales and use or rooms and meals taxes — which includes restaurants, hotels and others in the hospitality industry. Those businesses can apply for the program on the Department of Taxes website through October 30. Other businesses and nonprofits will apply through the Agency of Commerce and Community Development, which has not yet launched its application.

The state will assess each application and allocate the funds based on need once the application window has closed. Businesses can receive up to $300,000, depending on estimated losses.

The new program will evaluate business losses by comparing revenues between March and September of 2019 to revenues during the same period this year.

Unlike the previous round of funding, though, new businesses that don't have a full prior year of revenue to show are eligible to apply. Those businesses can submit up to seven months of revenue figures, through February of this year.

Businesses that opened since March — during the pandemic — are ineligible for the grants.

Goldstein said all businesses and nonprofits that have experienced revenue losses — including those that received funding in the previous round of grants — can apply.

But she said she anticipates seeing many applications from hospitality and tourism-related businesses, which have been hard hit by travel restrictions. And businesses that rely on large, in-person gatherings — entertainment, performing arts, transportation and some educational service providers — will also likely be able to demonstrate significant losses.

At Tuesday’s press conference, Gov. Phil Scott said the funding is important to making sure that businesses are able to survive the pandemic.

“We’ve talked a lot about Vermont’s success in suppressing this virus, and that’s important, because keeping people safe is our top priority,” he said. “But we can’t forget that this continues to take a toll on our businesses, especially in the hospitality sector.”

“What we need is for Congress and the White House to put politics aside, come together and provide another stimulus package just as soon as possible to help the state survive and recover,” he said.

The Agency of Commerce and Community Development will host informational webinars on the application process this Wednesday and Friday.
Prev
Next