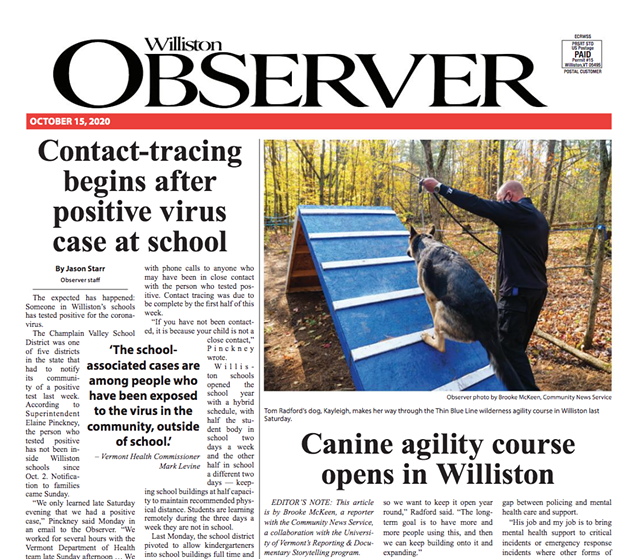 The Williston Observer has new owners for the first time in more than two decades.

Williston residents Susan and Rick Cote purchased the Observer earlier this month from Marianne and Paul Apfelbaum, who bought the weekly paper from its founding ownership group back in 1994.

The paper, which is mailed for free to every home and business in town, announced the sale in a page-two story on Thursday that quoted Marianne Apfelbaum as saying that she and her husband had been hoping to sell the paper to locals.

"I think people are going to be very happy with a smooth transition of the paper to new owners who are equally as committed to community journalism and serving the community as we are," Marianne Apfelbaum told the paper. She could not immediately be reached for comment on Thursday.

The Cotes moved to Williston 10 years ago from Woodstock, and prior to that lived in Cincinnati. Rick Cote, 53, is the executive director of advancement at Dartmouth College's Thayer School of Engineering. Susan Cote, 59, most recently worked in product marketing and brand management at Green Mountain Coffee Roasters. They purchased the newspaper under the name Twin Ponds Publishing.

Susan Cote told Seven Days that she had been looking to start or acquire her own business for the last several years.

"When I noticed that the Williston Observer was for sale, I got pretty intrigued," said the new publisher, who has never owned a newspaper before. "I thought it’d be something that I would feel like I was really contributing to my community if I became responsible for it."

Cote did not expect any major changes to the paper's operations. She plans to retain the paper's sole editor/reporter, as well as its part-time bookkeeper, and said Marianne Apfelbaum will stay on while she learns the ropes. She said her initial goal will be to understand the ins and outs of the Observer and ensure that the paper is on "firm financial footing."

"It’s a strange time — and a financially challenging time — for all of our local businesses and advertisers," she said. "Getting our feet under us is my first order of business."

And while she praised the Apfelbaums' long stewardship of the paper, Cote said she is interested in hearing "from residents, from businesses, to find out how they value the paper, what they like about it, and what additional or new things we could do." She said she personally has a "long list of ideas," starting with sourcing more content from community members.

It's unclear how much of an investment the Cotes made on the Observer. Seven Days reported in late 2018 that the Apfelbaums had put the weekly paper on the market for $350,000. But Cote declined to say how much she and her husband paid two years later, explaining that they and the sellers agreed to keep the price confidential.

Spending any amount of money to run a newspaper can be a risk. Local newspapers have long struggled to thrive in the internet age, and the coronavirus pandemic has hit the news business particularly hard as companies they rely on for advertising dollars have been forced to pinch pennies amid prolonged closures.

More than a dozen Vermont newspapers have been forced to announce layoffs or temporary furloughs since March. Other papers have cut back on printing or gone completely online. One Vermont newspaper — the Waterbury Record — has even closed down entirely.

Despite all the uncertainty, Cote said she believes the Observer's ability to provide readers with the type of community information that they cannot get anywhere else will ensure that it survives for years to come.

"People need and want that local source of information and that connection," she said. "Maybe I’m overly optimistic, but I feel really confident about the paper’s future."