Twentieth — and Final — F-35 Jet Arrives in Vermont | Off Message

The Vermont Air National Guard on Wednesday welcomed the 20th and final F-35 fighter jet to its fleet, making it the first base in the country to receive its full complement of the state-of-the-art aircraft.

"Today marks another notable milestone, and it also presents a clear reminder of the awesome responsibility that we've all been entrusted with," 158th Fighter Wing Commander Col. David Shevchik told dozens of Air Guard members gathered on the tarmac at Burlington International Airport, where he had just made a smooth — and loud — landing after a three-hour flight from Fort Worth, Texas.

The final jet's arrival comes 13 months after the first F-35s landed in Vermont and brings VTANG one step closer to becoming a deployable unit. But while Wednesday's event was celebratory in nature, Shevchik took time to address persistent complaints from critics who say the new jets are far more loud and disruptive than their predecessors, the F-16s.

"We know there's some that have struggled with our conversion," Shevchik said.

Controversy shadowed the decision to base the jets in Burlington for years leading up to their arrival. And the complaints have only increased now that the noisy new neighbors are here.

Pandemic Grounds Some Commercial Flights but F-35s Continue to Prowl Skies
By Kevin McCallum
Off Message
Hundreds of people urged Gov. Phil Scott earlier this year to suspend flight operations during the pandemic — to no avail. The Burlington City Council approved a similar resolution at a meeting in April, calling to cease flights over concerns that the jet noise was impacting people's mental health. That, too, went unheeded.

More in the Burlington area complained last month when the Air Guard performed night training exercises, which it said were needed to meet U.S. Air Force requirements and proficiencies. 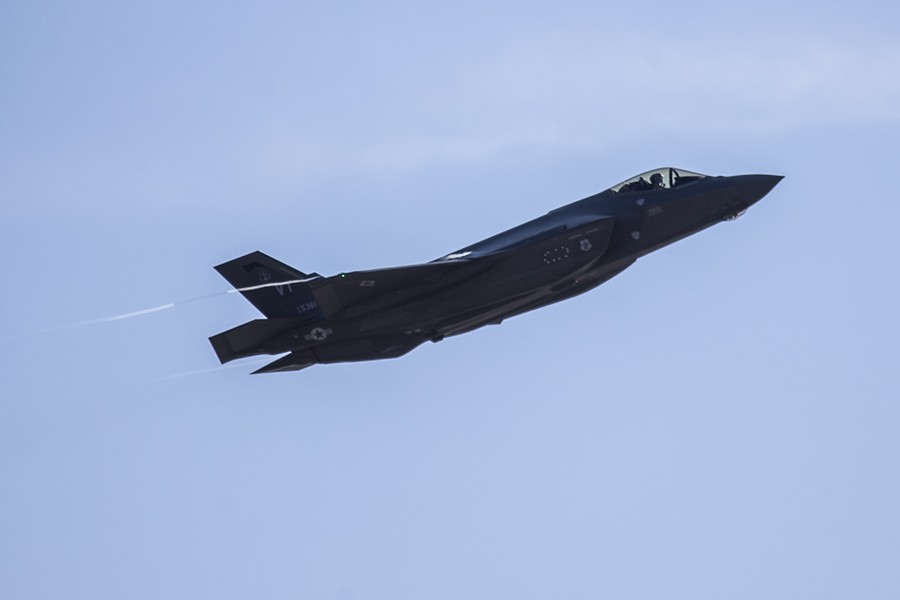 Shevchik acknowledged that the base's activity has "ramped up" since the first F-35s arrived last year. But he said that the Air Guard has taken "significant steps" to mitigate its noise impact, "including avoiding patterns that involve flying near local schools, not conducting landing exercises here — we do that elsewhere — and upon takeoff, we achieve the maximum height and altitude as quickly as we can.

"And when we land, we land from the highest altitude possible," he continued.

The Air Guard, according to Shevchik, is also engaged in two studies that will show whether it is meeting the requirements of its environmental impact statement.

"We will be held accountable to that report, and we will keep the public informed of that work," he said.

Related In the Zone: BTV Noise Map Contours Determine Who Can Get Soundproofing Funds

In the Zone: BTV Noise Map Contours Determine Who Can Get Soundproofing Funds
By Molly Walsh
Development
For its part, the Burlington International Airport recently secured about $3.8 million in federal grants to address noise concerns related to the jets. About $340,000 of that funding will be used to install three "mobile sound monitoring units" to gauge noise generated by air traffic. Another $3.49 million will be used to soundproof the Chamberlin School in South Burlington, which is located just a few blocks from the airport.

Shevchik, who took over command at the start of the year, said Vermont's F-35s are among more than 570 that been deployed around the country. The U.S. eventually hopes to expand the fleet to 3,000 jets.

"As the first Air National Guard Base to be selected for the opportunity to train and prepare to deploy the F-35, our work matters — and it doesn't end here," he said, noting that the wing should be fully combat ready by the end of next year.

"We'll [then] be ready to serve no matter where and when we are called, just like what we've always done," he said.
Prev
Next