Burlington's City Hall Park to Reopen This Week | Off Message 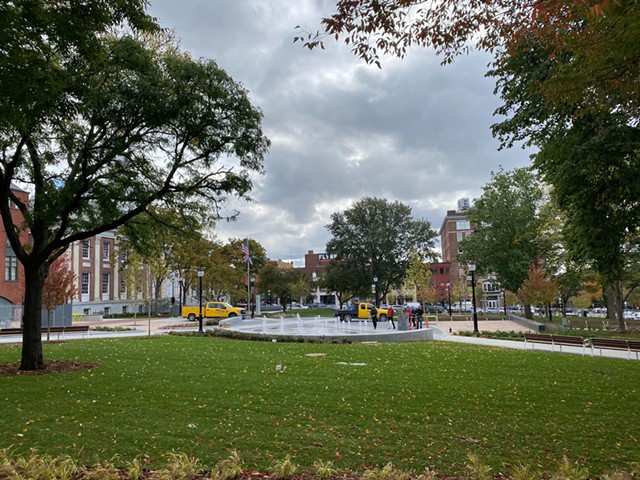 Burlington's City Hall Park will reopen this week after more than a year of renovations.

The downtown green space will host a two-day reopening ceremony on Friday and Saturday with live music, tours, film screenings and more. The showcase event celebrates the end of a park planning process that began back in 2011.

"It's been a remarkable city project from the beginning," said Cindi Wight, the city's Parks, Recreation & Waterfront director. "The park looks fantastic."

The city started construction in July 2019 when it gated off the park and cut down a number of trees — a move that angered a group of project opponents known as Keep the Park Green, which had tried and failed to get a court order to stop the tree removal. Many of the trees have been replaced with younger, hardier ones, according to Wight.

The new park also features wider pathways, a water fountain with customizable colored lights — think: orange for Halloween, red, white and blue for July 4th — and a new public bathroom. The standalone unit, called a Portland Loo, will be open every day the temperature stays above -20 degrees, meeting a longtime demand for accessible bathrooms downtown.

While Wight is confident that visitors will enjoy the new features, it's unclear whether the revamped park will lure back the Burlington Farmers Market. The park construction displaced the popular downtown summer staple, which moved last year to a parking lot on Pine Street in the South End. Dealer.com uses the space as overflow parking during the week, but it's otherwise empty.

The market had called the park home for nearly four decades. Before construction began, the city and market signed a memorandum of understanding that would allow the market to pay a reduced fee for three years after the park reopened. The first year would be free, with the fee increasing by $5,000 annually up to the original cost of $15,000 in year four.

Burlington Farmers Market Vendors Assess First Summer on Pine Street
By Jordan Barry
Food + Drink Features
Dealer.com has offered to extend that deal another year, but the vendors have not yet decided whether to stay or go, Ozeki said. One factor: the parking lot offers far more space for socially distanced shopping during the pandemic, she said. The market created a controlled shopping environment this summer — with one entrance, one exit and one-way pedestrian traffic — that would be hard to duplicate in a public park, Ozeki said.

"Until we see how the pandemic pans out, we really can’t say yes," she said.

City Hall Park presented other challenges. The market had to hire a private security company to ward off unwanted behavior, and some downtown shops blamed the transient vendors for stealing their business every Saturday, Ozeki said. She doesn't think the new park design has enough space for the market's 85 vendors.

Wight said the city would welcome the market's return and suggested some vendors could overflow onto St. Paul Street, which was also recently redesigned.

"In the end, it is their decision," Wight said.

In the meantime, Wight said she is looking forward to this week's events. Friday kicks off with a performance by Afro-funk septet Sabouyouma at 1 p.m., followed by tours of the rain garden, public art and other design features. The night caps off with a screening of 11 pandemic-themed short films that were selected for the Vermont International Film Festival’s Shelter in Place Showcase.

Saturday's events include more music, tours and an art "take and make" session, which asks visitors to draw their favorite park feature. The works will be displayed in the park.

"I think what I'm most excited about is just sitting on one of the benches with a lunch from one of the downtown restaurants and just watching people enjoy the park," Wight said. "I just can't wait to see the community use it."
Prev
Next