Resolution Would Allow Backyard Fires in Burlington This Winter | Off Message

Resolution Would Allow Backyard Fires in Burlington This Winter 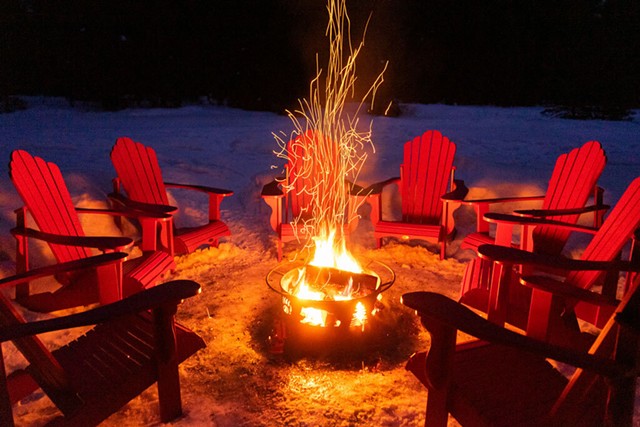 Get ready to gather ’round an outdoor fire this winter — even in Burlington.

A new Queen City proposal would allow backyard blazes in “fire safe receptacles” from November through April of next year. The resolution, which the Burlington City Council will consider on Monday, would temporarily change an effective ban on outdoor fires that’s been on the books since 1977.

This is the year for such a change, said Councilor Joan Shannon (D-South District), who wrote and introduced the resolution, which is cosponsored by three Democratic colleagues.

She referred to them as “COVID fires” and noted that a warm outdoor gathering place would encourage healthy socialization habits during the cold winter months of the coronavirus pandemic.

“This is not going to endorse every existing fire pit out there,” Shannon said. “But it creates a legitimate process for you to go through and get an approved outdoor fire.”

Burlingtonians interested in setting up an outdoor fireplace would need to apply for a permit from Fire Chief Steven Locke. He would visit the residence to ensure that there is sufficient space to burn untreated, unpainted wood in a fire-safe receptacle kept at an as-yet undetermined distance from structures, fences and property lines.

Further, the fire must be attended at all times, a water source must be nearby, and all fires must be put out by 10 p.m.

“Neighbor complaints may result in the termination of the permit,” the resolution reads.

The permit would let the fire department know who has permission for an outdoor fire, potentially reducing the number of false alarms called in by neighbors, Shannon said. She noted that the city already gets complaints about illicit backyard bonfires.

Anyone in the city could apply for a permit, but Shannon acknowledged that not every home would have the space necessary to host an outdoor fire.

“While it’s too bad that it wouldn’t be allowed for everybody, at least maybe you would have a friend whose yard would qualify,” Shannon said.

The resolution would only apply for the coming winter, but Shannon acknowledged that a successful rollout could lead to a more permanent change. The key is that her resolution would limit the fires to the colder months, when people have their windows closed and are less likely to be bothered by smoke from their neighbors’ yard, Shannon said.

“There are some potential health concerns with this,” Shannon said, “but there’s a lot of mental health concerns as we are looking down this tunnel of an isolated winter with COVID … I think we have to remember that mental health is health, too. We do want people to have opportunities to socialize, and that is the driver for this.”

The city is considering a somewhat similar proposal for parks. Cindi Wight, the Burlington Parks, Recreation & Waterfront director, has proposed creating designated areas for people to have permitted, safe beach fires. The fire department has recently seen a spike in calls for the unregulated blazes.

“Beach fires are a regular occurrence at Leddy Park and have been for generations,” Wight wrote in an August memo to the city Parks and Recreation Commission. “What if we embraced some of this as there is obviously interest and created sanctioned areas?”

The commission discussed the proposal at its September meeting but made no decision. Wight said she'd investigate further and come back to the commission with a more fleshed-out proposal.

Read the full council resolution below:
Prev
Next