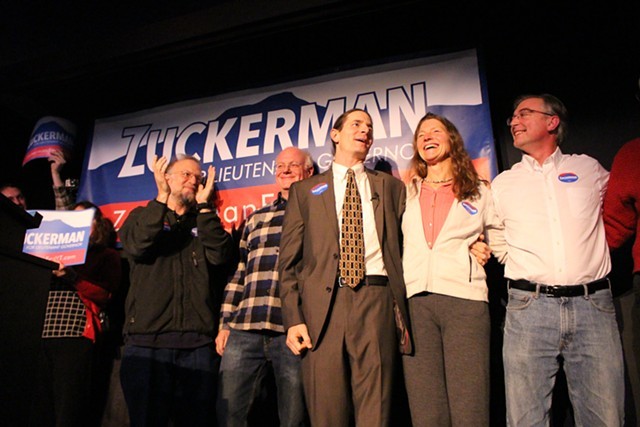 Lt. Gov. David Zuckerman's spouse on Tuesday night lashed out against the woman running to replace him, writing on social media that Democratic lieutenant gubernatorial nominee Molly Gray was “slimy” and “manipulative.”

In a Facebook post Tuesday night, Rachel Nevitt shared a photograph of her husband being sworn in as lieutenant governor and wrote that he had presided over the state Senate for the final time last week.

Zuckerman, a Progressive/Democrat who has held the LG’s office for the last four years, is running against Gov. Phil Scott.

“It is phenomenally sad to think that all of his hard work and dedication to the people of Vermont over the last 20+ years could be ‘replaced’ by a lying, manipulative, self-serving power-hungry individual who has only ever bothered to vote in ONE election,” Nevitt wrote. "And no, that was not the critical election of Hilary [sic] Clinton vs Donald Trump."

Nevitt's initial post did not name Gray, who has actually voted in more than one election. But given that Gray's failure to vote in the four general elections between 2008 and 2018 has become a central issue in her race against Republican businessman Scott Milne, it was obvious who Nevitt meant.

Nevitt stomped out any doubt soon after when she asked one of the post's commenters whether they had listened to Tuesday's Vermont Public Radio debate, which featured Milne and Gray.

"Holy Shit, she’s slimy!” Nevitt wrote, adding that this unnamed female candidate had called Zuckerman earlier in the day and lied to him about what she said in the debate, "then hung up on him in a hissy fit.”

“All this from a candidate that claims she will be the great unifier,” Nevitt wrote.

Related In LG Race, Gray and Milne Clash Over Their Voting Records

In LG Race, Gray and Milne Clash Over Their Voting Records
By Colin Flanders
Off Message
Nevitt’s comments came hours after Gray appeared reluctant to throw her support behind Zuckerman during Tuesday's debate.

Gray did not initially answer a question from Milne about whom she planned to vote for in the governor's race, instead using her time to push back on one of Milne's comments about her voting record. Pressed for a response, she said she would be voting “for the Democratic ticket, and that starts with the top of the ticket, with Joe Biden, and putting a Democrat in the White House.”

She then tried to turn the tables on Milne, asking whether he would be voting for Biden.

“I appreciate your tenacity, Molly,” Milne responded. “But I get to ask a question. You’re not telling us whether you’re voting for Phil Scott or David Zuckerman?”

Gray continued to ask Milne about who he was supporting for president, and eventually, the debate moved on without Gray ever saying who she planned to vote for.

But VPR moderator Bob Kinzel gave it one last shot before the debate ended, asking Gray again whether she would vote for Zuckerman.

“I’ll be supporting the Democratic ticket this year,” she repeated. “Here in Vermont, and in the White House.”

Zuckerman told Seven Days on Wednesday afternoon that he did not remember exactly what Nevitt wrote in the post but that she could "speak for herself."

"As a strong feminist, I’m not going to speak for her or what her intentions were," he said, encouraging this reporter to reach out to Nevitt directly.

For her part, Nevitt said that her comments had "nothing to do" with the issues impacting the most vulnerable Vermonters, which is what the media should be focused on.

"What this has to do with is reporters assuming that women are somehow objects of their husband’s possession, and what they say somehow equals what he thinks," she said.

She went on to say that people make comments on Facebook about political candidates "all the time" and that the story should be more about how there are people "creeping around on my private Facebook posts and making them public."

Nevitt did not believe her post should become public because of her husband's position. "I am not a candidate. I am not running for office," she said.

"People have been turned off to politics because, in part, the media likes to gossip about politics and try and cleave apart what’s real and important and make it about dirty trashy stories," she said. "I think that the media should be held to a higher standard and help people want to get involved in politics."

Seven Days asked whether she saw any contradiction with that sentiment and her disparaging comments about a first-time political candidate.

"You are gross and heebie-jeebie," Nevitt replied. "Don’t turn your crap around on me — your lack of your ability to tell the real stories that people want to hear."

Later, when asked whether she had any final thoughts, Nevitt said that she found it interesting no woman had called her about her post.

"I am sorry that males feel the need to ...," she said, before trailing off. She then told this reporter, "I’m sorry you didn’t get the job you wanted in life."

"Writing about the news," she said.

Zuckerman confirmed that he had indeed spoken with Gray on the phone on Tuesday, noting that they had "regularly" discussed approaches to reaching voters "throughout" the campaign.

He said the debate came up in their conversation but that he was not sure Nevitt could actually hear Gray on the other line because the phone was up to his ear.

"[Gray] said she would support me and, more or less, that's what she said [at the debate]," Zuckerman said.

He said Gray did not hang up on him as Nevitt claimed. "We both had places to go and it was a brief call," he said. If Zuckerman harbors any hard feelings about Gray's support for his campaign, he didn't show it on Wednesday. Gray has "said what she needs to do to try to get elected," Zuckerman said. And while it would "always be great" for them to work together "as much as possible," there are times "we each do that better or worse," he said.

Asked whether he agreed with his spouse's comments, Zuckerman said, "Well, I've only known Molly for a short while, and I've had a lot of good interactions with her. Not everyone's gonna agree on everything, but I look forward to her being lieutenant governor."

"In general, we're both supporting the Democrats up and down the ticket," he later said, adding that his goal, if elected, would be to work with Gray "as cooperatively and as productively" as possible.

As for whether he thought his spouse's comments might make that a difficult proposition, Zuckerman replied, "That's up to Molly."

Gray's campaign manager, Samantha Sheehan, said that her candidate would be unavailable for interviews on Wednesday afternoon as she was focused on her eighth and final community forum.

Her campaign instead sent a two-sentence statement attributed to her that read, "I have enormous respect for our Lieutenant Governor David Zuckerman and appreciation for his long career of service to Vermont. I look forward to continuing to work with him to elevate the issues most urgently facing Vermonters."

Gray's hesitancy to position herself too closely to Zuckerman comes as the two find themselves in vastly different positions heading into the final weeks of the campaign.

Gray is in a dead heat with Milne, who has run for statewide office two other times; a recent VPR poll places Gray with a 35 to 31 percent advantage, within the 4 percent margin of error. Zuckerman, meantime, trails Gov. Scott by more than 30 points.

Soapbox Derby: Molly Gray and Scott Milne Compete for the Lieutenant Governor’s Perch
By Colin Flanders
Politics
Still, Gray's arm's-length embrace of Zuckerman is in stark contrast to their Republican counterparts, who appear to be starring in their own buddy film.

Indeed, Milne has sought to capitalize on Scott's popularity throughout the campaign, often noting that they went to the same high school and have maintained a congenial relationship over the years. One of Milne's main pitches to voters is that unlike the adversarial relationship Scott has maintained with Zuckerman, he would instead serve as an ally to the governor.

Scott has reciprocated by throwing his full support behind Milne, endorsing him shortly after the primary and appearing in a digital ad praising his business chops.

Dems Rally Around Primary Winners, Criticize Scott
By Colin Flanders
Off Message
Zuckerman and Gray, meantime, have had a more one-sided dynamic, as demonstrated by their individual victory speeches at a Vermont Democratic Party press conference two days after the August primary.

Gray spoke for nearly four minutes at that event but never mentioned Zuckerman, saying only that she looked forward to working with the Democratic ticket. Zuckerman, one the other hand, offered Gray a “huge congratulations” on her victory, joking as she moved out of the sun into a shady area on the Statehouse lawn that she was “already showing her leadership and intelligence.”

“I look forward to running with you all across this state,” Zuckerman said, “and both of us being first across the finish line.”
Prev
Next