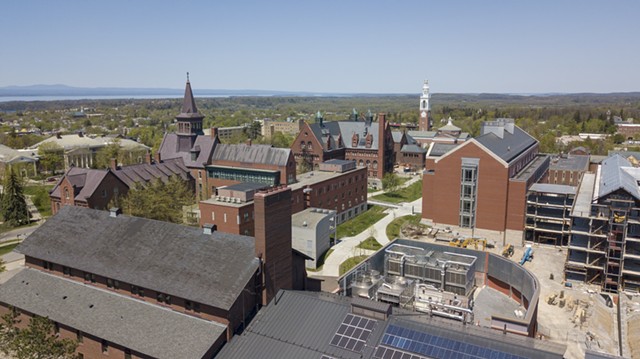 The editor of the Vermont Cynic, the University of Vermont’s student-run weekly newspaper, has condemned changes to its student media adviser position, alleging that the move, implemented without student leaders’ advice or consent, threatens the independence of UVM’s three media outlets.

In addition to providing advice to student journalists at the Cynic, the media adviser also offers guidance to WRUV 90.1 FM, the student-led campus radio station, as well as UVMTv, the on-campus television network.

The previous media adviser, Chris Evans, left UVM in July after 14 years to teach journalism at the University of Illinois. During Evans’ tenure, the advisory role fell under UVM’s Department of Student Life, which oversees nearly 300 student clubs on the Burlington campus. Like other cocurricular groups, the Cynic, WRUV and UVMTv are largely or entirely funded by student activity fees.

Last month, the administration appointed Jenny Grosvenor, a former journalist and currently a senior lecturer in the UVM College of Arts and Sciences, to fill Evans’ vacancy. As UVM Provost Patricia Prelock explained in an email to Seven Days, the college recently launched a new minor in reporting and documentary storytelling, so moving the adviser job into the college “support[s] our goal of providing students with a more integrated academic experience, creating options for coursework to advance their skills in journalism.”

But as Loftus pointed out in an interview with Seven Days, none of the Cynic’s editors are currently enrolled in that minor. Neither is Katie Masterson, station manager of WRUV, nor Daisy Powers, station manager at UVMTv. Moreover, aligning the Cynic, the only one of the three media outlets that engages in traditional news gathering, with a particular school or academic program “leads to the possibility of greater restrictions as to who can participate and what content gets to be published.”

The leadership at WRUV and UVMTv agreed.

“Associating our student-led and programmed radio station with an academic program will destroy the fabric of what WRUV is and will ultimately lead to the detriment of students,” Masterson said in a statement to the Cynic. “I am disturbed and astonished at the obvious failure to incorporate students in a decision about their own organizations, seeing as we are working professionals who have been successful running these organizations for the betterment of the UVM name.”

Loftus was also dismayed that, as editor-in-chief, he was left out of the hiring process for Evans’ replacement.

“We begged for weeks to meet with the Provost to explain why the specific changes to our adviser’s role would be ultimately detrimental not only to the student media organizations, but free speech and a free press as guaranteed under the U.S. Constitution,” Loftus wrote.

However, in an email to Seven Days, Prelock challenged the students’ narrative, contending that, in fact, her office made 16 attempts between August 16 and September 8 to meet with student leaders to discuss the new appointment, in some cases receiving no responses. Prelock noted that the appointment of Grosvenor, which had to be done internally due to UVM’s current hiring freeze, didn’t take place until after she had met with leaders of UVM's Student Government Association.

“Our goal was always to talk with the media leaders before we made this interim appointment,” Prelock added, “but with the students’ schedule, the summer planning for return to campus during a pandemic, this was unable to happen.”

Prelock also pushed back on the Cynic’s allegation that the administration’s goal is to exert control over students’ editorial content, including, as Loftus’ claimed, that it wants “prior review” of stories before they go to press.

“I think the fact that The Cynic was able to publish the [editorial] is a proof of concept that we honor their ability to tell their story as they perceive it,” she wrote.

Any effort by the administration to exert prior restraint on the Cynic’s journalism likely would face a rigorous and successful legal challenge, according to Mike Hiestand, senior legal counsel for the Student Press Law Center in Washington, D.C.

No matter how UVM administrators restructure the adviser's position, Hiestand said in a phone interview, student journalists enjoy strong legal protections, both under the First Amendment of the U.S. Constitution, and under Vermont statute, which also affirms the independence of student journalists.

At the federal level, Hiestand said, there’s been established case law for half a century that says administrators at public colleges and universities must maintain a “hands-off approach” to student publications, which includes exerting undue influence on students’ advisers.

“I would hope that [UVM] is not looking to go down that road,” he added. “That advice could be very heavy-handed.”

Creating an academic framework for journalists at the Cynic would be a dramatic departure from the historical independence of the student-led newspaper, which was founded in 1883 as the University Cynic. The most comparable model in Vermont would be the Defender, the student newspaper at Saint Michael’s College in Colchester, which is published as part of a journalism class.

David Mindich is professor and chair of the department of journalism at Temple University in Philadelphia. For 20 years, Mindich taught journalism at St. Michael’s, including a decade as faculty adviser to the Defender and to the Echo, its online competitor. During his tenure, he said, both publications enjoyed relative independence from the administration.

There were times that administrators called Mindich to complain about the content. But as a tenured faculty member, he said, “There was pressure, but not so much that I couldn’t resist it.”

One year, he recalled, the Defender published a sex survey of students on campus, which didn’t go over well with some administrators at the private Catholic college. Though the article itself was “excellent,” Mindich said, the image on the cover, which portrayed two students in bed, provoked some anger and dismay.

“As a Jewish faculty member, I wasn’t aware of the significance of publishing this during Holy Week,” he said. “What you discover as a department chair or as a newspaper adviser, there’s never a good time [for controversial content]. Administrators are prickly. So it’s the job of any good department chair or any good adviser to push back.”

Evans, who’s now an assistant professor of journalism at the University of Illinois’ College of Media, was reluctant to comment on the dustup at his former workplace, except to say that he never read students’ stories before they went to press unless they asked him to.

“UVM has a long tradition of protecting and supporting an independent student press, and clearly, students think that is changing,” Evans said in a phone interview. “So it’s important to listen to what they have to say. I hope that the administration is open to having a dialogue with them.”

For his part, Loftus emphasized that his grievances are not a reflection of his views on Grosvenor, the new student media adviser. Loftus, who has worked for other local media outlets, including Vermont Public Radio, the Burlington Free Press and VTDigger.org, said he’s disgusted by the way he and fellow student reporters are treated by the administration as “second-class journalists.” He characterized the relationship between the Cynic and university leadership as one of “extreme distrust.

“I don’t really see how the university can ask us to trust them,” he added, “when they very clearly don’t trust us.”
Prev
Next