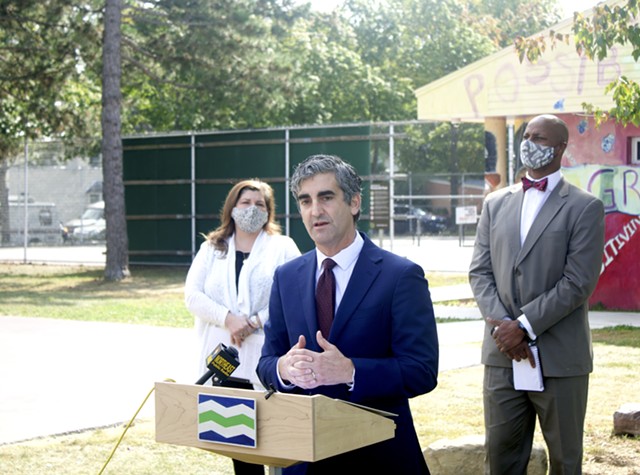 
Weinberger announced on Friday that he had appointed Dodson to a six-month role as director of police transformation, a new, temporary position that will lead the city's work to "forge a new consensus on policing."

Dodson, a graduate of Harvard University and the University of Vermont, has helmed the YMCA since 2016 and previously served on the Burlington School Board. He will take a leave of absence from the nonprofit to assume the new city position.

"Kyle is a tremendous leader," Weinberger said during a press conference at Roosevelt Park in the Old North End. "I know he can do this work, and I'm grateful for him lending his considerable experience, skill and vision to oversee this work and make good on the promise of this moment."

In the months since, demonstrations aimed at the Burlington Police Department have become more intense. During the first wave of demonstrations, the Burlington City Council voted to cut the police force over time from 105 officers to 74. Protesters have camped in Battery Park for the last month, demanding the termination of three officers who have used force in controversial ways.

Related How Black Lives Matter Protesters Occupied a Park, Captivated a City — and Got Some of What They Wanted

How Black Lives Matter Protesters Occupied a Park, Captivated a City — and Got Some of What They Wanted
By Chelsea Edgar
Politics
The city council on Monday approved a separation agreement with one cop, Sgt. Jason Bellavance, that is worth more than $300,000. Weinberger has said he does not support similar agreements with the other officers, arguing that their conduct was less egregious. The protests have continued.

Dodson is tasked with overseeing a slate of recent council-created police review processes, in addition to finding new areas of change.

Dodson applauded the mayor for what he described as a "bold move" but said the "devil is in the details."

"We're still working those out," he said. 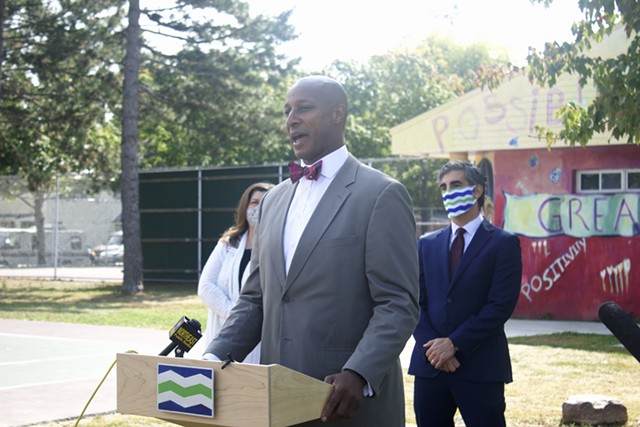 Members of the city council were informed of the new position on Thursday night, President Max Tracy (P-Ward 2) said. Tracy said he was still uncertain about precisely what Dodson is being hired to do.

"It's disappointing that we weren't consulted before, because the council has been an important partner in this work," he said.

Acting Police Chief Jon Murad joined Friday's announcement. He described the road ahead as a challenge to "transform public safety while keeping people safe." Weinberger said Dodson and others involved in reform efforts will need to work with the police department to enact reforms.

The latest pledges of reform echo a similar push in 2019. In response to outrage over the same use-of-force incidents that are still galvanizing protests today, city officials created a special committee on policing. The process sparked revisions to the department's use-of-force policy, but more structural reforms were cast aside.

Burlington City Council Votes to Cut Police Force Through Attrition
By Courtney Lamdin
Off Message
Dodson on Friday compared the series of efforts to a process of "trial and error." He said the nationwide movement sparked by the police killings of George Floyd and Breonna Taylor offers a new chance to improve.

"Something different is happening," Dodson said. "The question is, can we transform it?"

In addition to hiring Dodson, Weinberger announced other, smaller changes to police oversight. Most notably, he issued an executive order that gives the mayor's office more input on disciplinary decisions related to police use of force.

The city's current charter gives sole authority over disciplinary decisions to the police chief. Weinberger supports changing the charter, which would require a ballot measure, but said Friday's order would provide a stopgap.

The order requires the chief to consult with the mayor before disciplining an officer in instances where citizens are injured or that raise "significant public concern." The mayor's office will recommend a course of action to the chief.

Weinberger did not immediately commit on Friday to making those recommendations public, saying he needed time to consider it.

He also announced four other actions:

Battery Park protesters have remained steadfast in their specific demand that all three BPD officers be fired. Because the officers were already disciplined once, the city would face legal exposure if it terminated their employment now.

Weinberger on Friday sought to shift the focus away from their specific demands in favor of more general reform.

"I think what has made these protests so compelling to many Burlingtonians are the larger themes of racial justice," Weinberger said. "It is there that I see real opportunity for common ground."
Prev
Next