Vermont Budget Deal Came Together After Marathon Negotiation | Off Message 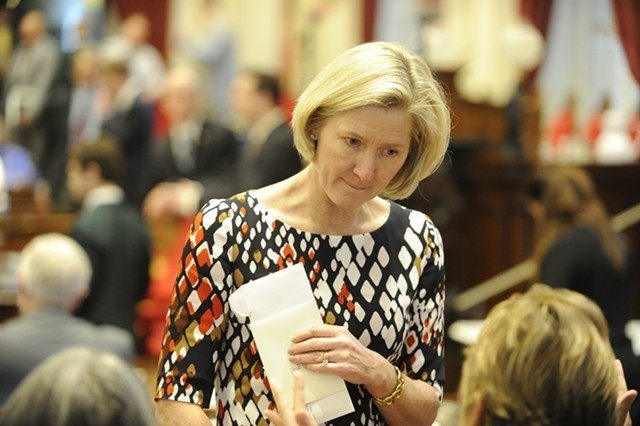 Vermont lawmakers pulled together a last-minute compromise on the state’s $7.2 billion budget after a marathon negotiating session on Thursday that focused on seemingly minor differences between House and Senate versions.

Squaring off for the final time were the chairs of the chambers’ two appropriations committees: Rep. Kitty Toll (D-Danville), who is retiring, and Sen. Jane Kitchel (D-Caledonia). The two are sisters.

Beginning at 7 a.m. on Thursday, the committee of conference established to hash out differences between the two budget bills met repeatedly before striking a compromise at 10 p.m.

Both legislative chambers signed off on the agreement Friday.

Senate President Pro Tempore Tim Ashe (D/P -Chittenden) served on the committee and said Kitchel remained “firm” despite her affection for her adversary.

“There was no quarter given based on sibling love,” Ashe assured his colleagues.

Even so, Ashe said the back-and-forth that would normally happen in person was made profoundly more difficult by the pandemic and the need to operate remotely.

“It was such a brain-scrambler in terms of knowing which documents to be looking at and making sure everyone was on the same page,” Ashe said.

The final compromise included adjustments that, in terms of the overall budget, were modest.

Lawmakers added $2.5 million to help ski resorts pay for upgrades to keep skiers socially distant this winter. They also reinstated $71,000 to the Department of Forests, Parks and Recreation for maintenance and interpreters.

Legislators also reserved $21,000 for the purchase of body cameras for the Capitol Police Department. And they expanded by $400,000 downtown tax credits meant to help revitalize city and town centers.

Some of the lengthier committee debates surrounded policy issues, such as the future of the Woodside Juvenile Rehabilitation Center, Kitchel said. The compromise includes a requirement that the administration issue a report on the future of the empty facility by November 1.

Toll stressed to her colleagues that these allocations pale in comparison to the “huge infusion” of $1.25 billion in federal CARES Act dollars. She noted that  because of the federal formula for small states, Vermont received the second largest amount of federal aid per capita in the nation.

“The amount of money that we were able to put out, it’s saving us in this unprecedented time,” Toll said.

Lt. Gov. David Zuckerman similarly called out the importance of the federal aid and credited U.S. Sen. Patrick Leahy (D-Vt.) for it. Leahy helped ensure that the state received an additional $500 million — and Zuckerman called the funding “a savior” for the state.

“I think any one of us in this room would be horrified to think of the damage to the people of this state … were it not for that additional $500 million,” Zuckerman said.
Prev
Next