Protesters Round Up Copies of Seven Days for Evening Demonstration 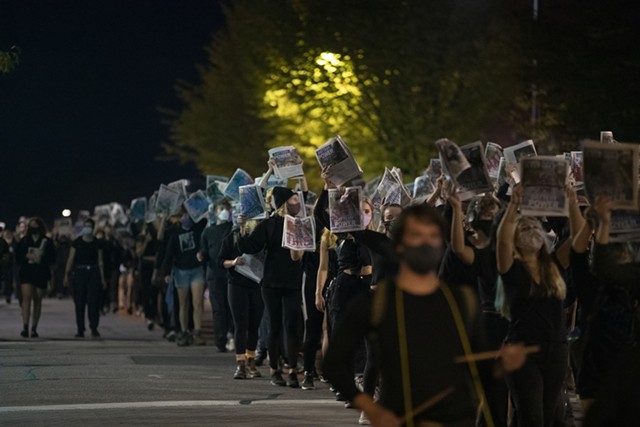 Hundreds of copies of Seven Days went missing from newsstands on Thursday after organizers upset with the paper's coverage called for issues to be rounded up and brought to Burlington's Battery Park.

The call to action was a response to the paper's cover story, “Battery Power,” published on Wednesday. The story, subtitled “How Black Lives Matter Protesters Occupied a Park, Captivated a City — and Got Some of What They Wanted," chronicled the movement that has spurred nightly protests at the park and city hall for more than a month.

Led by people of color and their allies, the protests have primarily demanded that three Burlington police officers accused of using excessive force be fired. Thursday's demonstration, however, sought to lift up Black women as a counter-narrative to Seven Days' coverage.

In her first-person account, writer Chelsea Edgar described her efforts to gain access to the protesters, many of whom refused to talk to the press. Former organizer Anthony Marques did speak to Edgar, and he criticized the femme leaders.

Related How Black Lives Matter Protesters Occupied a Park, Captivated a City — and Got Some of What They Wanted

How Black Lives Matter Protesters Occupied a Park, Captivated a City — and Got Some of What They Wanted
By Chelsea Edgar
Politics
After the story was published, activists flooded social media with calls to collect copies of Seven Days and bring them to the park. One online post urged allies to complain to the newspaper "about the misogynoir, racism, sexism and clear patriarchal content" in the story. Seven Days also received a flurry of letters to the editor.

On Thursday morning, circulation staff found that an abnormally large number of papers was missing from dozens of newsstands and racks in Burlington and Winooski, including both City Market, Onion River Co-op locations; the downtown Phoenix Books; Kountry Kart Deli; and others.

By Thursday evening, many of those papers were stacked on a long table in the park. Organizers asked participants to read Edgar's story, then paint words on the newsprint that represent white supremacy and patriarchy. 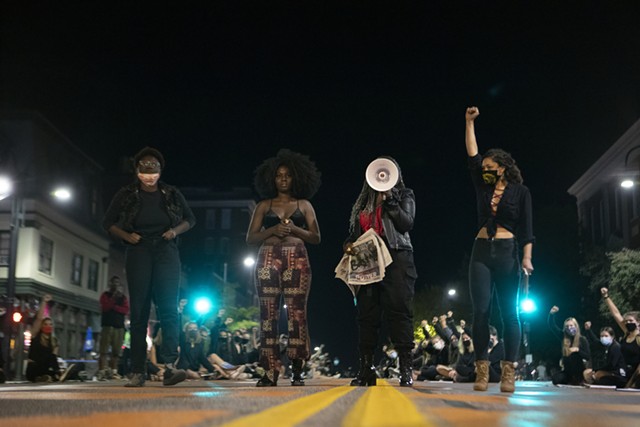 "Fuck this," one newspaper-turned-protest sign read. "Your words are empty," said another.

The marchers proceeded down Battery Street with the papers held above their heads. The organizers sat in the back of a pickup truck, leading the group in chants of "Say her name!" and "Believe Black women!" They turned onto Main Street and marched up to the Black Lives Matter street mural, then sat in the street.

Not even the F-35 jets that flew overhead could drown out the megaphones. Organizers spoke about how Black, Indigenous and other women of color have been erased from narratives about activism.

They spoke about Breonna Taylor, a 26-year-old Black woman fatally shot by Louisville, Ky., police in March, and urged the crowd to uplift Black women. The group, clad in all black, erupted into applause and began chanting, “Black anger is powerful! Black women are angry, and they deserve to be!”

One of the protest leaders then ignited a small pile of the newspapers, let them burn and stamped out the modest flame. Several others ripped their copies and added to the pile, chanting, "Chelsea 'bout to lose her job." The white men in the crowd then tossed the papers in a recycling bin in an act that protesters said symbolized dismantling white supremacy.

"The individuals carrying out these retaliatory actions are exhibiting the very authoritarian behavior they are protesting," she wrote.

Correction, September 29, 2020: A previous version of this story misquoted one of the group chants.
Prev
Next