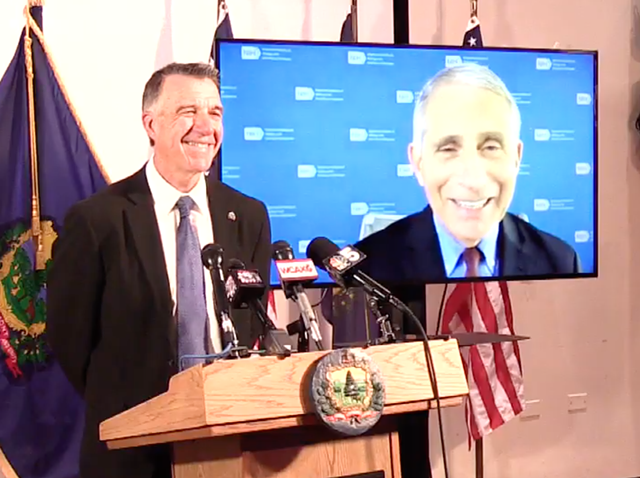 Dr. Anthony Fauci, director of the National Institute of Allergy and Infectious Diseases, appeared via live video feed at Gov. Phil Scott’s Tuesday press conference and said he wished he “could bottle” Vermont’s recipe for success and communicate it effectively to other states.

“Please, you’ve done so well, don’t let your guard down,” Fauci said. “This virus is a formidable foe — you give it an opportunity to reemerge its ugly head, whether you are in the beautiful rural areas of Vermont or the middle of Manhattan or the Bronx, the virus is going to take advantage of that.”

Fauci, the most trusted member of the White House Coronavirus Task Force, praised state leaders for their “prudent” response to the virus. Heading into the fall, the state’s low infection rate means “you are starting the game on your side.”

Combined with the possibility of a vaccine in coming months, Fauci said he was optimistic the nation “would be in good shape” in 2021.


“I believe strongly that if we do what you have been doing in Vermont in the rest of the country … we can not only get through the fall and the winter, but can come out on the other end better off than we went in,” he said.

Fauci, who noted he was on his way to the White House on Tuesday afternoon, fielded a handful of questions from reporters about the state’s response to date, the opportunities to reopen the economy further, the safety of vaccines, and President Donald Trump’s response to the pandemic.

He sidestepped a pointed questioned about whether Trump, in light of the revelations in journalist Bob Woodward’s latest book, could have saved lives if he had been upfront with the American people about the dangers of the virus instead of downplaying them.

“That is not productive, because all it does, I think, is intensify divisiveness,” Fauci said. “It’s best now to look forward."

Fauci noted that while Vermont is “very different” from other places with higher infection rates, the differences can’t all be attributed to the state’s very low population density. The rates are a sign that the preventative measures the state has implemented, including aggressive contact tracing when outbreaks emerge, have played a major role in that success.

That contact tracing is now being put to the test with news that two schools — Crossett Brook Middle School in Duxbury and Hartford High School in White River Junction — reported positive cases over the weekend.

“Everyone who may need to take action to protect themselves or others will hear from us quickly," Levine said. He noted that in 96 percent of cases, all people in close contact with a positive case are contacted within 24 hours about the need to quarantine.

While the state’s experience with a statewide mask mandate “could be a model for the country,” Fauci said a nationwide mandate “probably would not work.”

Wide variability in attitudes about mask wearing from state to state and enforcement challenges mean the issue is best handled on a “case-by-case basis,” he said.

“In some areas, anything that smacks of an authoritative statement to the citizenry often is met with a considerable amount of pushback,” he said.

In response to a question from Levine about the safety of future vaccines, Fauci said he is aware that some are concerned about “political pressure” being placed on the drug approval process. But he stressed the “multiple layers of checkpoints” to prevent political interference.

The vaccine trials, even ones as accelerated as those underway or upcoming, undergo rigorous, independent data reviews to confirm safety, he said. Federal Food and Drug Administration officials have pledged not to approve a vaccine “unless it is clearly shown to be safe and effective” and should be trusted, the infectious disease expert said. Fauci added that he and other health officials will be watching the trials carefully and “are not shy about giving our scientific opinions.”

“If there is a vaccine — which I’m fairly certain there will be — that's safe and effective, I for one would not hesitate to take it, nor would I hesitate to recommend that my entire family do it,” he said.

Get news about coronavirus in Vermont