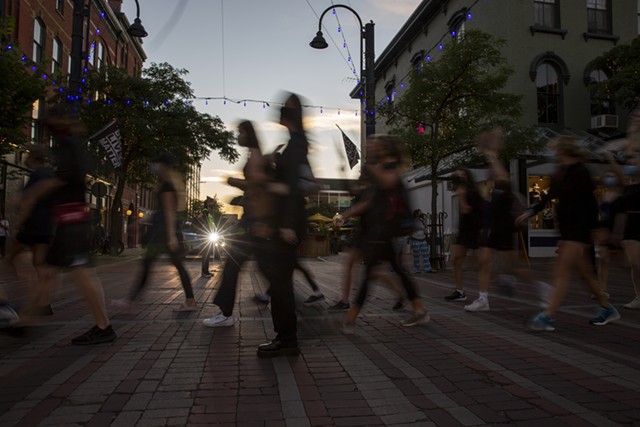 Seven Days has filed a complaint against the Burlington City Council that alleges councilors violated Vermont's open meeting laws at a special meeting held on September 8.

In the filing sent to city officials on Thursday evening, the newspaper argues that it was illegal for councilors to invite protest organizers into an executive session to discuss police personnel, specifically Sgt. Jason Bellavance and officers Cory Campbell and Joseph Corrow — the subjects of ongoing demonstrations at Battery Park. Deputy news editor Sasha Goldstein submitted the complaint on behalf of the paper.

Vermont law says the closed-door sessions are limited to members of a public body, municipal staff, attorneys and "persons ... whose information is needed" in a discussion. The newspaper asserts, however, that "nothing presented publicly suggested that the protesters possessed any privileged information regarding the conduct of the three police officers."

The law gives the public body 10 calendar days to either deny a violation occurred or to acknowledge the mistake and take steps to remedy it. If the newspaper is unsatisfied, it could choose to take the matter to court.

Reached on Friday, City Council President Max Tracy (P-Ward 2) wouldn't comment on the complaint itself. The full council will discuss it at Monday night's meeting — in executive session.

"I certainly take the complaint seriously and want to address it," Tracy said.

The meeting on Tuesday was called in response to the protests, which have occurred nightly at City Hall and Battery Park. Among other demands, the activists say the three officers should be fired for using excessive force, particularly against Black men. City officials have said they can't do that without inviting a lawsuit because the officers have already been disciplined.

Burlington Council Hears From Protesters, Passes Police Oversight Resolution
By Courtney Lamdin
Off Message
Councilors on Tuesday heard two hours of public comment from protesters and their allies, after which three organizers delivered prepared remarks that urged the council to take action.

As the meeting reached its fifth hour around 11 p.m., councilors made the first of a two-part motion to enter the closed session. They unanimously agreed that discussing the personnel matter in public "would put the city at a substantial disadvantage."

Councilor Jack Hanson (P-East District) then moved to invite in the three organizers, who did not identify themselves with their full names. The meeting was conducted on Zoom, and none of the protest organizers were visible on the council's live stream.

Hanson explained that he wanted to hear from the protesters behind closed doors because their viewpoints could influence the council's deliberations.

"Having that information public ... could be disruptive to the negotiation," Hanson said. "I think their voices are really important to include, at least to be able to hear from them."

Councilor Chip Mason (D-Ward 5), an attorney, seemed shocked at Hanson's suggestion and argued that the conversation with protesters should happen in public. He questioned whether the council could legally speak to the organizers behind closed doors and whether the protesters would offer anything different from what they'd already said in public session.

Councilor Franklin Paulino (D-North District), who is also an attorney, agreed that the discussion should happen in public unless the organizers had direct knowledge of the officers' behavior. He called Hanson's motion "an unprecedented action."

Councilor Joan Shannon (D-South District) questioned the organizers directly, asking if they had information that could only be shared in private.

"When we speak about wanting to offer our piece and our voice, it's not just to speak towards the majority and the experiences," one of the organizers said. "It's to speak and amplify the voices that are not heard, especially in political situations like this."

Shannon pressed further. "My question, specifically, is do you have information that cannot be shared with the public?" she asked.

"Yes, we believe that we would be able to have a very different conversation if we were in private with the council and the decision makers," another organizer said. "You also need to understand where we stand on this, and that is best done in a private dialogue."

Mason balked at that response. "We don't go into executive session for negotiation because someone doesn't want to share their position publicly," he said.

The majority of councilors took Hanson's side. They agreed that the protesters could come in for a portion of the session but would have to leave so that City Attorney Eileen Blackwood could provide legal advice. Only Mason, Paulino, Shannon and Councilor Karen Paul (D-Ward 6) voted against the invite.

The councilors emerged two hours later, around 1 a.m., and took no additional action but to adjourn.

Seven Days' complaint says that the council's action is "deeply concerning to this newspaper and government transparency advocates."

"How can the council choose to discuss the matter with some constituents while shutting out the rest of the community?" the complaint says, noting that the officers' controversial actions — and the protests they've spurred — "make this an issue of intense and ongoing public concern."

Lia Ernst, a staff attorney with the American Civil Liberties Union of Vermont, said the section of the open meeting law that the councilors relied on is exceedingly vague and has rarely, if ever, been tested in a Vermont courtroom. Ernst had not watched the meeting, but she expressed concern after this reporter briefed her on the council's actions.

"These provisions should be interpreted liberally to allow the greatest amount of public access to the body's business," she said. Inviting in the public needs "to be justified under one of the exceptions to open meetings."

Ernst said the councilors seemed confused about the proper way to proceed. She suggested they could have been clearer upfront about why the protesters needed to speak in private and that, after the session, should have explained why the closed session was appropriate.

"It just seems like a lot is just shrouded in mystery," Ernst said of the meeting. "The way they went into and out of executive session just leaves a lot of questions on the table."

Jenny Prosser, general counsel for the Vermont Secretary of State, agreed with Ernst that the law is overly broad. But Prosser would not say whether she thinks the council broke the law. She said she had not received any concerned calls from residents about the council's conduct.

Seven Days has asked the council to "release the names and titles or affiliations of every person who entered the executive session; how long the members of the public were allowed to participate in the closed-door meeting; and what topics of conversation were discussed," the complaint says.

The paper is also seeking any notes, memos or minutes taken during the session and wants an explanation of how protesters' testimony would have disadvantaged the city in its discussions about the officers' conduct.

"Further, we demand that the council immediately discontinue its abuse of executive session and conduct trainings on the open meeting law to ensure this does not happen again," Goldstein wrote. "A decision by the council to commit itself to transparency and adherence to the law would go a long way in regaining the trust of the public."

In an interview on Friday, Hanson said he's not a lawyer but he felt Blackwood, the city attorney, had given her blessing to split the closed session in two parts: one with the protesters and one without. Hanson, who was first elected to the council in March 2019, said he welcomes a discussion about executive sessions.

"I've given my perspective and why I thought it was justified, but I continue to learn and be open-minded," he said. "I want to make sure that I am doing it right going forward. So, if I did make a mistake with the motion, I'd want to understand that."