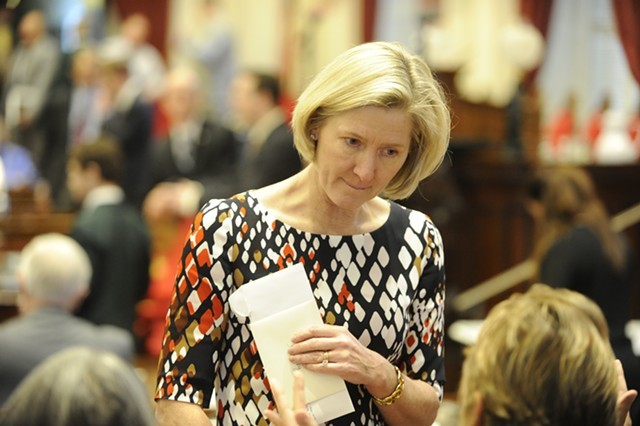 By a nearly unanimous vote on Thursday, the Vermont House advanced a $7.2 billion state budget covering the fiscal year that began just over two months ago.

Rep. Kitty Toll (D-Danville), who chairs the House Appropriations Committee, told lawmakers that her panel had endeavored to make minimal changes to state government operations as Vermont navigates its way through the coronavirus crisis. "It is a steady state budget in an uncertain time," she said during a debate on the virtual House floor.

Still, Toll described the bill as "massive" — largely because, in addition to funding the normal functions of state government, it allocates a portion of the $1.25 billion in federal Coronavirus Relief Fund aid the state received earlier this year.

The bill also provides another major tranche of funding to the embattled Vermont State Colleges System, which proposed closing three campuses — in Lyndon, Johnson and Randolph — earlier this year as it reckoned with a structural deficit worsened by the pandemic. The budget includes $23.8 million worth of bridge funding to keep those campuses open for another year as the system seeks a long-term solution to its financial woes. The latest cash infusion would bring the total state investment in the system this year to more than $98 million.

The budget bill, H.969, cleared the House by a vote of  140 to 4. Final passage is expected Friday, after which it would go to the Senate and then Gov. Phil Scott for his signature.

Thursday's vote was the latest step in an unprecedented budgeting process that has already lasted four months longer than usual. After the coronavirus reached Vermont last spring and decimated the state's economy, lawmakers first revised the fiscal year 2020 budget, then appropriated $827 million in federal aid, then signed off on a first-quarter budget covering July, August and September.

'Phenomenal Uncertainty' Clouds Vermont's Fiscal Outlook, State Economists Say
By Paul Heintz
Off Message
The legislature adjourned until August, hoping that by then the federal government might provide more money — or at least more flexibility to use existing money — and expecting that state economists might have a better sense of how much tax revenue would be collected in fiscal year 2021. The federal government took no action, but the state received some positive news: that delayed income tax collections had come in higher than expected and that revenue estimates had somewhat improved. That enabled Scott in August to propose a full-year budget, including revisions to the first-quarter spending plan, with no major program cuts or tax hikes.

Scott Pitches Budget Plan Without Tax Hikes, Program Cuts
By Paul Heintz
Off Message
The House tweaked aspects of Scott's proposal but largely followed his lead. In a statement on Thursday, spokesperson Rebecca Kelley said the administration appreciated the House's "quick work" on the budget and said there was "a lot of common ground" between the two plans. She said the administration would review the changes and provide specific feedback later in the budgeting process.

The most significant difference between the governor's budget and the House's revolves around funding for higher education. In his August plan, Scott proposed using Coronavirus Relief Fund money to keep the state colleges afloat, but only if the federal government allowed states to use the aid next calendar year, which is currently prohibited.

The House determined that was unlikely to happen and decided to take a different approach: It used a portion of the federal aid to fund Vermont State Police and Department of Health salaries, freeing up general fund dollars that could then be directed to the state colleges.

In a typical year, Rep. Peter Fagan (R-Rutland City) told his colleagues, the colleges receive a roughly $30 million appropriation. This year, through several funding bills passed in recent months, the system will receive more than three times that amount. "This is a lot of money from a lot of places in a lot of bills," he said.

In a written statement on Thursday, Vermont State Colleges System chancellor Sophi Zdatny called the appropriation "good news" and a sign that lawmakers were committed to supporting the institution. "This bridge funding provides us with an opportunity to make the system better, stronger and more unified, while maintaining high quality and expanding access," she said.

The House budget also provides another $10 million to the University of Vermont, bringing its total appropriations this year to nearly $81 million, and it doles out $10 million to Vermont's 11 independent colleges and universities.

In total, the House budget dispenses another $223 million worth of federal aid, the remainder of Vermont's $1.25 billion allocation. Of that, another $100 million worth of economic stimulus payments would go to businesses, ski areas, workforce training,  tourism and marketing. Scott had proposed devoting $133 million to those areas.

Thursday's debate was relatively muted, and the bill earned votes from members of all three major parties. The four representatives who voted against it were all members of the Vermont Progressive Party who faulted it for failing to raise more revenue and invest in programs serving those hardest hit by the pandemic.

Rep. Randall Szott (D/P-Barnard) took issue with Toll's characterization of it as a "steady state budget," saying, "It seems like a low bar. We have the resources to do better ... In a time of crisis, services ought to be expanded, not merely maintained."

Said Rep. Selene Colburn (P/D-Burlington), "We've missed an opportunity in our overall process to ask the wealthiest Vermonters to give back the significant tax breaks they received under the Trump administration so we can better support low-wage frontline workers and address the serious inequities amplified by the COVID-19 crisis."

But in her own remarks, Toll emphasized the need to prepare for future state budgets that may not benefit from federal aid or unexpected revenue and may more deeply reflect the economic toll of the pandemic.

"It is a budget that works and is needed for Vermonters as we face so many unprecedented challenges and especially as we face in the months ahead a fiscal landscape that is unknown," she said. "This budget is balanced and it keeps our state reserves full to provide capacity for funding the likely difficult decisions in January."
Prev
Next