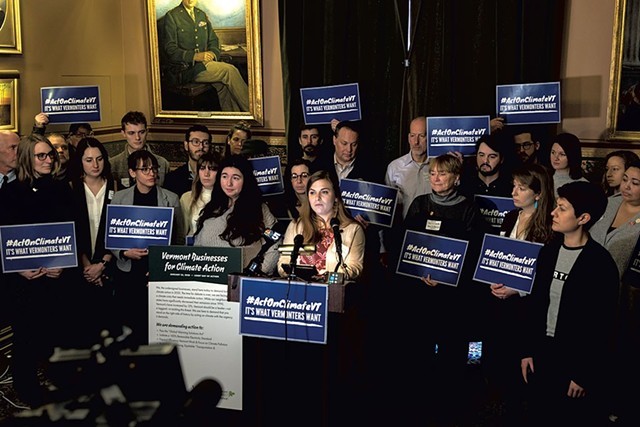 The Vermont legislature passed a controversial climate protection bill on Wednesday with enough votes to override a likely gubernatorial veto.

The House passed H.688, the Global Warming Solutions Act, by a 102-45 vote, sending it to Gov. Phil Scott’s desk in the coming days. The Senate had approved the bill in June by a wide margin.

During an emotionally charged vote, supportive lawmakers lined up to laud the bill as vital to ensuring that the state meets its greenhouse gas emission targets, while critics called it foolhardy to allow residents to sue the state should it miss those goals.

“I want to look my daughter in the eye and tell her this vote is for her and the children she may have,” Rep. Mary Sullivan (D-Burlington) said. “The time to act was decades ago, but better late than never.”

Sullivan and fellow supporters praised the bill as a sensible way to ensure that the state shifts quickly to a clean energy economy that both reduces emissions and saves residents money.

Global Warming Solutions Bill Appears Headed Toward Veto Fight
By Kevin McCallum
Off Message
But critics, including many Republicans and those in rural areas, denounced it as ill-timed given the economic fallout of the COVID-19 pandemic.

“There are parts of our economy that are in shambles right now,” said Rep. Jim Harrison (R-Chittenden). “We have thousands of unemployed. We have businesses that have closed and others that are hanging on by a thread.”

Harrison said he supports protecting the environment, but he argued no harm would have come from taking up the bill in the next legislative session, when lawmakers would have a better sense of the budget impacts the state faces.

Others countered with a litany of climate impacts in the news, including wildfires ravaging California, to argue that delay wasn’t an option. Several noted that Vermont is the only New England state whose emissions have increased per capita in the last 30 years and that neighboring states have already passed similar climate measures.

"Change of this magnitude is scary,” Rep. Laura Sibilia (I-Dover) said, “but Vermonters are counting on this. We know this is coming. We have an obligation to act. We cannot wait.”

Some suggested that Vermont is simply too small to make a difference, but Rep. Mike Yantachka (D-Charlotte ) said that, like donating blood, every little bit helps.

“When it comes to climate change, doing nothing is not an option,” he said.

Rep. George Till (D-Jericho) said he found it ironic that lawmakers would cite the state's coronavirus-inflicted budget woes to argue against acting now to address the climate crisis.

One of the core objections surrounded the creation of a 23-member Vermont Climate Council responsible for coming up with a plan that the state Agency of Natural Resources would have to implement. Critics repeatedly called this an “abdication” of lawmakers’ responsibility and, like Gov. Scott, questioned its constitutionality.

Minority Leader Pattie McCoy (R-Poultney) said it “flies in the face of a citizen legislature” to have an unelected council responsible for adopting state policy.

Others noted, however, that the solutions required by any plan adopted by the council would need legislative funding to be effective.

After President Donald Trump backed out of the Paris climate accord, Scott vowed in 2017 that the state would join others in agreeing to meet the goal, which calls for a 26 percent reduction in 2005 emissions by 2025. The state is not on track to hit that mark, according to the latest data.

Scott has cited his support for electric vehicles, among other initiatives, as evidence of progress his administration has taken toward meeting the state's goals, but environmental groups have sharply criticized those efforts, calling them insufficient.

Asked about the bill's prospects on Tuesday, Scott said he "had some concerns that have not been met at this point that I think are detrimental to the state."

Wednesday's vote was significant because it demonstrated that, should Scott follow through with a veto, lawmakers had the two-thirds majority in the 150-member House and 30-member Senate to override it and make the bill law.
Prev
Next