Burlington Protests Intensify With March to Mayor's Home | Off Message

They blocked portions of Main Street twice during their march and laid in the street in front of the mayor's personal residence while a speaker recited the names of Black Americans killed by police.

The names of the dead were also displayed on coordinated cardboard signs, each scrawled in dripping red strokes. Dozens of other marchers held up black-lettered signs that spelled the names of three Burlington police officers whose dismissal from the department is the protesters' most immediate demand.

It made for a stark spectacle during the dinner hour, as orange-vested volunteers stepped across Main Street and rerouted vehicles without police assistance. Protesters, many of whom were college-aged, walked from the University of Vermont campus to Summit Street, where the mayor lives.

It was the second time this summer that Black Lives Matter protesters have stood outside Weinberger's house. Friday's event was far larger than the first.

Racial Justice Protesters March to Burlington Mayor's House
By Courtney Lamdin
Off Message
Protesters stood in four rows in the neighborhood street, their chants interrupting a large group of college-aged men who were lazily tossing lacrosse balls in the yard next to Weinberger's house.

The disciplined crowd raised their fists in unison and fell silent. Zanevia Wilcox held up a megaphone and began a new chant, aided by booming tenor drums.

"What do we want?" she yelled. 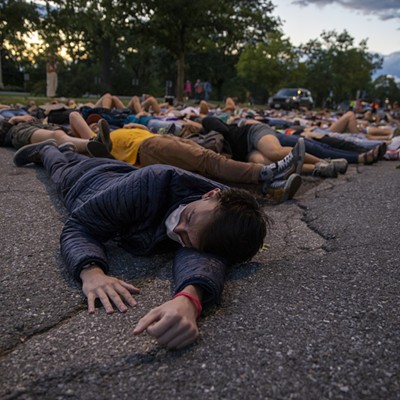 March on Mayor Weinberger's House
By James Buck
Click to View 26 slides
The windows were dark inside Weinberger's home, and no cars were visible in the driveway. But shortly before the march began, his office sent a lengthy letter to protest organizers, who have set up an overnight encampment in Battery Park next to the police station.

In the two-page letter, the mayor said that, while he supports protesters' First Amendment rights, he is concerned for their safety since violence has occurred at some protests in other cities.

Police Arrest Man Who Carried AR-15 Near BTV Protests
By Derek Brouwer
Off Message
Weinberger wrote that the city may begin issuing civil tickets to protesters who continued to camp overnight. The city may also write noise violations to prevent further complaints about late-night noise near the encampment.

The mayor urged organizers to seek permits for their demonstrations and allow "trained professionals" to conduct traffic control if they plan to block roadways.

"We understand civil disobedience and the important role that protests have played throughout the country’s history to advance Black lives," Weinberger wrote, noting that BIPOC communities "have had to literally fight for every right they have. We want, and need, to be a partner in that fight with you, not a hindrance. However, the City must also do what it can to ensure safety for all our residents, and apply our ordinances and standards fairly to all parties."

Cut the Police: The Bid to Slash Law Enforcement Funding in Vermont
By Dan Bolles, Derek Brouwer, Colin Flanders and Courtney Lamdin
Crime
Wilcox responded to Weinberger's letter in a speech in front of his house. "The mayor has a lot to say about his concern for our safety," she said into the megaphone. "Miro, if you cared about our safety, you'd take these three cops off the street."

Protesters argued, in the form of another call-and-response chant, that Weinberger would have "blood on his hands" if the officers hurt or killed another person.

Spoken word poet Rajnii Eddins read aloud a poem he's read at innumerable rallies in recent months. On his verbal cue, the protesters dropped to the pavement. The four rows of bodies stretched the entire block.

Protesters then marched down Main Street to city hall, where other speakers responded to Weinberger's line-item concerns. They then continued up the Church Street Marketplace, as they have every night.

City officials have long resisted calls to fire the three police officers whom protesters have targeted on the grounds that they were already disciplined for conduct that dates as far back as 2018. Disciplining them again could expose the city to a lawsuit by the officers and their union.

"It needs to be addressed, and we can't ignore the fact that hundreds, that thousands of people in the city have considerable concerns about the department," Freeman said. "We have to have a meeting. We have to talk about that."