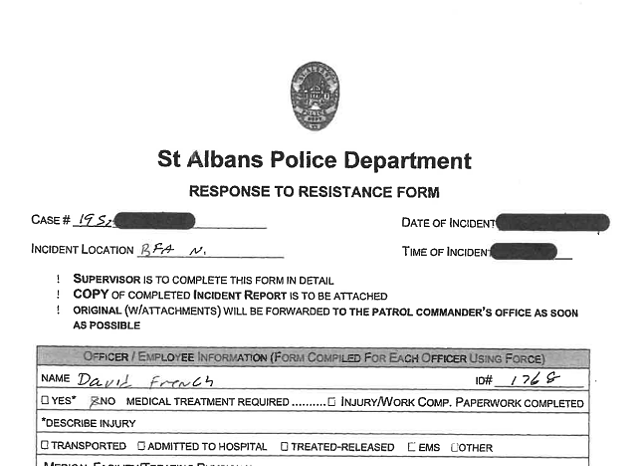 A St. Albans police officer told a disabled student that he was "acting retarded" for not obeying the officer's commands during an altercation inside Bellows Free Academy high school last year.

The City of St. Albans and the Maple Run Unified School District agreed this month to pay the student's family a total of $30,000 to settle a human rights complaint alleging that they discriminated against the 17-year-old student on the basis of his disability. Officer David French, who worked at BFA as a school resource officer, was reassigned to a street patrol unit in June 2019, after the school year concluded.

The city released some information about the case on Wednesday in response to a public records request Seven Days filed on July 16. The city and school did not admit wrongdoing as part of the settlement, which includes a $8,750 payment from the city. Insurers are paying the remainder.

The city has not yet released body camera video related to the incident, but an internal investigative police report into a complaint from the student's mother describes the March 26, 2019, incident.

According to the report, two school administrators were speaking with two students on a bench near the school cafeteria during lunchtime when French said he was radioed to help. French told a department investigator that he didn't know why he was called but got the impression that school officials were trying to search the students for "contraband."

French said he asked the student, whom Seven Days is not naming because he was a minor at the time, to quiet down and stop using profanity. The student replied, "Fuck you, bitch." French threatened to arrest him for disorderly conduct if he continued and soon asked the student to place his hands behind his back.

A struggle ensued, during which French took the student to the floor. After about a minute, according to a supervisor's summary of the video footage, the student was handcuffed and eventually escorted to a cruiser outside. He was charged with disorderly conduct, though the outcome of the criminal case is unclear.

During an interview with the unnamed police supervisor, French admitted that "after [the student] pushed against him and his hand away, he (Cpl. French) stated ... 'why are you acting retarded?'"

According to the city's statement, the student has a "diagnosed disability that is  not visibly apparent." French told the investigator he wasn't aware the student had a disability.

"There is no excuse for calling anyone retard," the student's mother wrote in a complaint to the police department. Her son had scratches and bruises from the tussle, and his finger was "split open," she wrote.

The internal police review cleared French of using excessive force, finding that the student had "actively resisted" the officer's commands.

The subsequent complaint to the Human Rights Commission concerned the officer's language, not his use of physical force, the city said.

Since leaving the school, French "has performed well as a patrol officer and developed valuable competencies in de-escalation strategies and conflict resolution," the city's statement reads.

The settlement contains a "publicity" clause that limits what the parties can say about the case. The family's attorney, Robert Appel, did not respond to calls for comment.


In an interview, Maple Run Unified School District Superintendent Kevin Dirth said school employees had concerns about the incident at the time and reported them to the police department. The district did not conduct its own investigation, but Dirth said he believed his employees acted appropriately in calling upon French to help.

The district has learned from the incident and made tweaks to its contractual agreement with the police department as a result, Dirth said.


The officer's use of the derogatory term was "shocking" and "unacceptable," said Marilyn Mahusky, an attorney for Vermont Legal Aid's Disability Law Project who was not involved with the case. "It's really blatantly biased and discriminatory."

The settlement is only the second city payout related to policing despite a slew of alleged excessive force incidents and officer arrests that have come to light over the past year. Three former officers face pending criminal charges, and a fourth is under criminal investigation.

'Dark Cloud' Over St. Albans PD After Officer Charged With Rape
By Derek Brouwer
Off Message
Those cases led the city to revise its hiring practices, change some internal investigative and use-of-force policies, and create a citizen advisory panel. The longtime chief, Gary Taylor, retired earlier this year.

Some local activists have pushed for deeper reforms, criticizing the recent changes as superficial. They have also taken aim at the use of uniformed cops in schools, a practice that has been swept into nationwide calls to reduce the police presence in communities.

Cut the Police: The Bid to Slash Law Enforcement Funding in Vermont
By Dan Bolles, Derek Brouwer, Colin Flanders and Courtney Lamdin
Crime
In June, Mahusky and another attorney with the Disability Law Project penned an open letter to state leaders calling for Vermont schools to end their school resource officer programs. They wrote that police officers in schools are particularly harmful to disadvantaged groups, including students of color and those with disabilities.

"Vermont schools are no more secure since the introduction of police in our schools and the criminalization of often age-appropriate behavior, or behavior directly attributable to a student’s disability," they wrote.

In Winooski, Students Lead Charge for Anti-Racist School Reform
By Alison Novak
Education
Maple Run Unified School District officials defended the school resource officer program, which costs $246,000 annually, during a school board meeting last month. "I have to admit, our experience has been positive," superintendent Dirth said at the meeting.

The 2019 incident was not mentioned during that meeting. Dirth alluded generally to occasions that merited "further discussion and training."
Prev
Next