In Convention Speech From Burlington, Sanders Makes the Case for Biden | Off Message

In Convention Speech From Burlington, Sanders Makes the Case for Biden 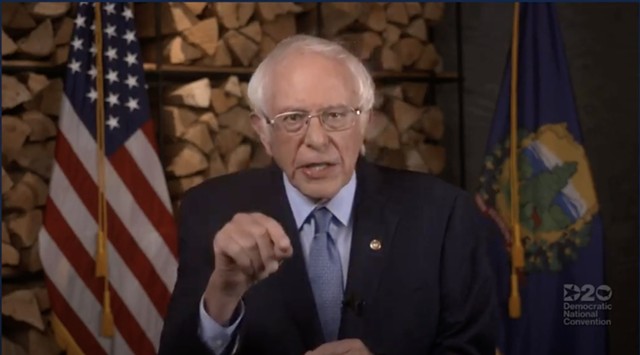 In remarks to a virtual Democratic National Convention on Monday night, Sen. Bernie Sanders (I-Vt.) delivered a searing indictment of President Donald Trump's presidency and an impassioned plea to his supporters to vote for Democratic nominee Joe Biden.

As the runner-up for the Democratic presidential nomination — for the second election cycle in a row — Sanders had been expected to play a prominent role in the Milwaukee convention. But due to the ongoing threat of the coronavirus pandemic, he and most other speakers delivered their remarks from home. Sanders appeared to have done so from Hen of the Wood's Burlington location, using the restaurant's neatly stacked firewood as a backdrop.

Sanders pulled no punches in his eight-minute remarks. Calling the 2020 election "the most important in the modern history of this country," he repeatedly referred to Trump as an authoritarian — and alluded to the Holocaust's devastating toll on his father's family.

"Under this administration authoritarianism has taken root in our country. I and my family and many of yours know the insidious way authoritarianism destroys democracy, decency and humanity," he said. "As long as I am here, I will work with progressives, with moderates, and, yes, with conservatives to preserve this nation from a threat that so many of our heroes fought and died to defeat."

And in a line that will be sure to get under Trump's skin, he memorably described the president's failure to contain the pandemic. "Nero fiddled while Rome burned. Trump golfs," Sanders said. "His actions fanned this pandemic resulting in over 170,000 deaths and a nation still unprepared to protect its people."

Since dropping out of the presidential race in April and endorsing Biden a week later, Sanders has consistently supported his more moderate rival. During his remarks Monday night, he again attempted to lead progressives to the Democratic nominee, telling them, "We need Joe Biden as our next president."

Though his movement had made great strides in recent years, he argued, "If Donald Trump is reelected, all the progress we have made will be in jeopardy."

One by one, he listed policy positions on which he and Biden agree: a $15 minimum wage, paid family leave, universal prekindergarten, 100 percent clean electricity, and an end to private prisons and cash bail. Though he conceded that the two "disagree on the best path" toward universal health insurance, he argued that Biden would expand access, make prescription drugs more affordable and lower Medicare eligibility from age 65 to 60.

"And to heal the soul of our nation, Joe Biden will end the hate and division Trump has created," Sanders said. "He will stop the demonization of immigrants, the coddling of white nationalists, the racist dog whistling, the religious bigotry, and the ugly attacks on women."
Prev
Next