Committee Agrees Artist Should Touch Up Her Downtown Mural | Off Message

Committee Agrees Artist Should Touch Up Her Downtown Mural 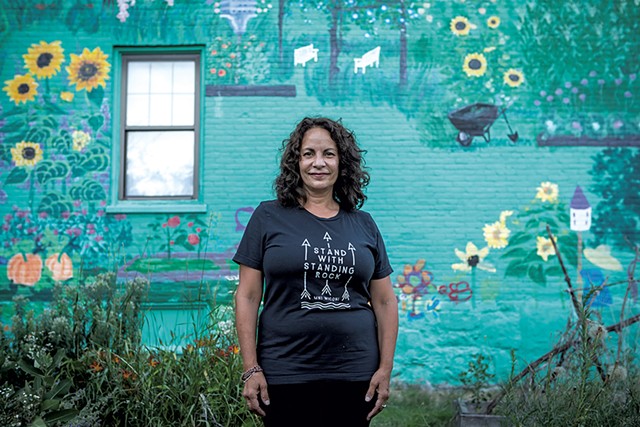 A Burlington City Council subcommittee is working on a proposal to pay a local artist to restore her mural when the controversial "Everyone Loves a Parade!" piece comes down this month.

Members of the Parks, Arts and Culture Committee agreed Wednesday that Gina Carrera should fix up her rain forest piece that was covered up by the parade mural, known as ELAP, in 2012. Carrera painted the colorful jungle scene in 1992.

"The city should be paying Ms. Carrera for her time," said City Councilor Karen Paul (D-Ward 6), who chairs the three-person subcommittee. "There's only one person who should be doing that work, and that is the artist who put it on the wall."

The committee also agreed to ask the full council to allocate $25,000 to remove the parade mural. The city commissioned the piece to celebrate the 400th anniversary of explorer Samuel de Champlain's arrival in Vermont. It has been highly criticized for omitting people of color, specifically the Abenaki people who had settled here first.

In May, the council voted 11-1 to remove or cover the mural by August 31. The PAC committee was directed to find a place for the artwork or dispose of it by September 30. The resolution says nothing about the future of the space in Leahy Way.

Burlington City Arts executive director Doreen Kraft said it will cost $12,500 to remove the mural and more funds to patch the holes left by its wooden frame. It will be placed in storage at Burlington International Airport, Kraft said.

Carrera said she and the city had not yet agreed on a sum for her repair work.

"It's more important for me to get that mural repaired as quickly as possible," she told Seven Days on Friday.

Carrera maintains that she holds rights to the space under a section of copyright law known as the Visual Artists Rights Act, which protects works of "recognized stature" from damage or destruction. When Carrera learned ELAP would be removed, she wrote a letter to city officials asserting her rights to the wall. City attorneys told Carrera that the city has an easement that allows it to control what goes there. Carrera said she was prepared to sue to protect her rights.

An Artist Stakes Her Claim to a Wall Covered by a Controversial Mural
By Courtney Lamdin
City
At Wednesday's meeting, City Attorney Eileen Blackwood said the city would welcome Carrera touching up her rain forest mural. "We're not going to exercise our easement to do anything to disrupt that in the near term," she said.

The city's long-term plans are less clear. The council has not yet decided what should replace the parade mural, nor did the subcommittee tell Carrera that she'd be selected to paint a new mural design in the alley.

City Councilor Ali Dieng (I-Ward 7), a member of the subcommittee, said Carrera should be able to fix up her rain forest piece but that it shouldn't remain there forever.

"Any resolution that is going to come forward needs to have a timeline, which the artist would need to accept," he said, adding that other artists should be involved in creating the next mural.

Carrera is hopeful that she will be involved in the process. She envisions a scene that depicts the diverse population in Vermont, the very antithesis of the parade piece. Several people called into the meeting to express their support of Carrera retaining rights to the wall.

"Let's honor her contribution and the lineage of muralists that got us to this moment by hiring her to paint a new mural in Leahy Way," fellow muralist Mary Lacy said. "I see this as having a lot of potential and bringing many artists together, as I know myself and many others will be there with a paintbrush in hand to help."
Prev
Next

Burlington Gina Carrera mural Everyone Loves a Parade! Web Only