Chittenden County Senate Candidate Files for a Recount | Off Message 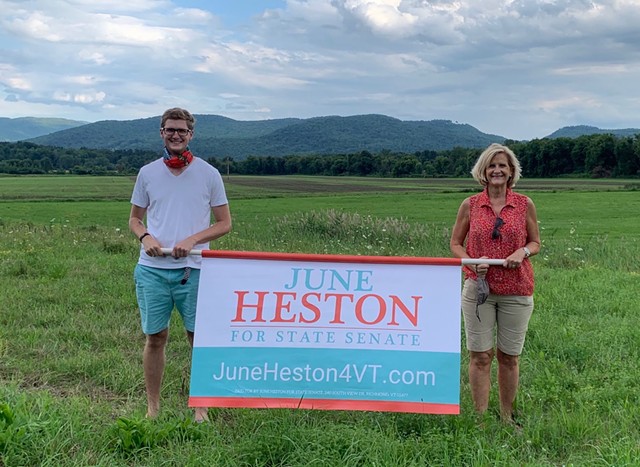 A Chittenden County Senate candidate has filed for a recount after coming 46 votes shy of winning a Democratic nomination for one of the district's six seats.

June Heston, a nonprofit consultant from Richmond in her first-ever political race, told Seven Days she filed her request with the Chittenden Superior Court on Friday afternoon.

"This is the first time that we've had such a large number of mail-in ballots," Heston said in a phone interview, referring to the record number of absentee votes sent in for Tuesday’s primary election. "I feel that I owe it to my supporters — with such a tight margin — to ensure that we are being responsible and following through with the democratic process."

Heston had been mulling the move following a nail-biting finish in the crowded Democratic Senate primary, which featured 13 candidates vying for six seats. She and Sen. Chris Pearson (P/D-Chittenden) remained neck and neck throughout the evening, leapfrogging each other multiple times for the district's final spot; at one point late in the night, the race was as close as a single vote.

Zuckerman to Face Scott in Governor's Race, Gray Upsets Ashe for LG
By Paul Heintz and Colin Flanders
Off Message
Pearson eventually pulled ahead as the final precincts reported their results. As of Wednesday morning, he was 42 votes ahead of Heston — 11,759 to 11,717 — and added three more to his lead by Friday. Heston was considering a recount the day after the election but told Seven Days at the time that she wanted to see the official results.

"I was wondering if the margin would widen," she said on Friday. "It didn’t." After "a lot of advice and counsel," she then decided to move forward with the recount.

Reached Friday, Pearson said Heston had told him earlier in the day that she was leaning toward a recount. He was unaware she had made up her mind but said he was not surprised by her decision.

"They are always emotional, but this election season, with everything going on, is particularly intense," Pearson said. "For some of the night, she and her supporters thought she was going to win, so you can understand wanting to be confident in the results."

Vermonters Smash Primary Turnout Record
By Colin Flanders
Off Message
To qualify for a recount, candidates must file with the Vermont Superior Court by the Tuesday after the election. Statewide and Senate candidates who are within 2 percent of the total votes cast divided by the number of seats in the district can request a recount. Heston is well within that figure.

A recount date will need to be set within five business days after Heston files her petition. The court system will then refer the matter back to the county clerk, who will administer the recount, according to Will Senning, Vermont's director of elections and campaign finance. Senning did not know of any other recount requests as of Friday.

The recount will be a significant undertaking; every ballot cast in Chittenden County will need to be reviewed.

"I know this is going to be an imposition on many people," Heston said. "I want to thank them in advance for their efforts."
Prev
Next