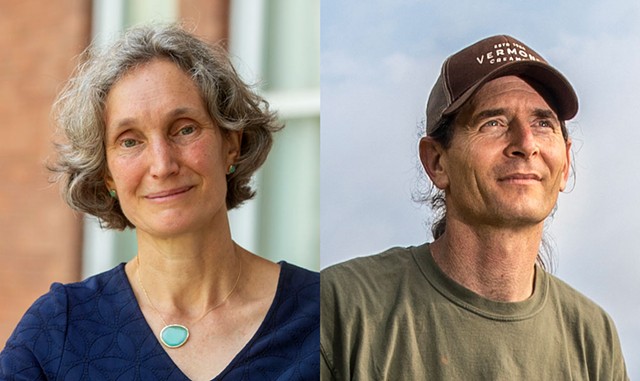 Holcombe, a former state education secretary, has been hammering Zuckerman since March over his past skepticism of vaccine science and his efforts to derail legislation that eliminated the state's philosophical exemption to vaccine mandates. Zuckerman, a two-term lieutenant governor, has claimed without evidence that Holcombe is misrepresenting his record.

In a new television advertisement released Tuesday morning, Holcombe argues that Vermont's next governor will need to ensure that a potential coronavirus vaccine is distributed properly — and she suggests the LG isn't the one to do it.

"My opponent, David Zuckerman, is a nice man, but he's questioned the science behind vaccines," she says. "The anti-vaxxers call him their hero. As governor, I'll always follow the science, and that's the difference between us."
Holcombe went even further during Tuesday's debate on Vermont Public Radio and Vermont PBS, which also featured Democratic candidates Pat Winburn and Ralph Corbo. Given the opportunity to question a rival of her choosing, Holcombe said that Zuckerman had "cast doubt and fed fears about the safety of long-proven vaccines," and she asked him whether he took responsibility for "actually undermin[ing] the public health of Vermonters."

In response, Zuckerman said, "I support vaccines, and I will follow medical professionals' advice for making COVID-19 vaccines mandatory." He added, "I voted for removing the philosophical exemption, even though in your representation, you've distorted my views."

In fact, as Seven Days reported in April 2015, Zuckerman worked to preserve the philosophical exemption and, on two separate occasions on the floor of the Vermont Senate, disputed vaccine science and questioned the motivations of vaccine developers. In an interview with the Associated Press during the same time period, he argued that decisions around childhood immunization should be made by parents.

Senate Votes to Nix Philosophical Exemption to Vaccine Mandate
By Paul Heintz
Off Message
At the time, Vermont required children to receive certain vaccines before attending public schools but allowed parents to claim medical, religious and philosophical exemptions. Following a measles outbreak in California, three senators sought to remove the philosophical exemption, arguing that it was driving down the state's vaccination rate and therefore imperiling those who, for medical reasons, could not be vaccinated.

Zuckerman, then a member of the Senate, argued on the floor that the pharmaceutical industry was pushing vaccines simply to make money and said that Vermonters should have the right "to do their own research" and make their own decisions about whether to be vaccinated. The next week, he introduced an amendment to maintain the philosophical exemption pending the development of "a reliable DNA swab test to check for the genetic predisposition to an allergic reaction to various immunization ingredients."

Zuckerman's amendment failed by a voice vote. The Senate then voted 18 to 11 in favor of the underlying amendment removing the philosophical exemption. Zuckerman concedes that he was among the 11 who opposed that measure, but he claims he subsequently voted for the bill to which it was attached. Because no roll call was requested, it is impossible to verify whether that's the case.

During Tuesday's debate, Holcombe cast doubt on his current claim. "David, I was there as secretary of education in 2015," she said. "I heard what you said. It's on VPR. It's in Seven Days. It's clear." She added that the amendment Zuckerman had introduced years earlier would have set "an untenable standard that went against the advice of public health experts."

To that, Zuckerman said, "I've stated unequivocally many times my support for the science of vaccines, the science on climate change." If elected governor, he continued, "We will follow both scientists and medical experts with respect to vaccines."

Corrected July 22 at 9:26 a.m.: An earlier version of this story mischaracterized Zuckerman's current claims about his April 2015 votes.
Prev
Next